For a very brief two years, 1933–35, Virginia was gerrymander-free, as its nine co

ngressional representatives were elected at large, i.e., by the entire voting population of the Commonwealth, not from particular districts. In addition, since passage of the 17th amendment in 1913, US senators have been elected at large by their state constituencies.

Except for the House of Representatives, direct/popular election of the president and US senators was not on the table for the Framers of the Constitution. Having allowed the states to determine voter qualifications [age, sex, color], along with the drawing of electoral boundaries, the Framers unwittingly engendered a host of opportunities for states to engage in electoral mischief, including Jim Crow laws and gerrymandering. Progress in the democratization of the American electorate has largely been initiated at the national level, enfranchising former slaves, women, and youth at the age of 18.

As it turned out, the selection of US senators by state legislatures devolved into a seriously corrupt practice, creating an incentive in the Congress in 1911 to move an amendment for their popular election. The presidential elections of 2000 and 2016 demonstrated that the Electoral College system supported a victory for a candidate with fewer popular votes nationally. As students of history will recall, the Framers constructed the electoral system to ensure that the president was not elected directly by vote of the citizens.

In 2017, the American Legislative Exchange Council [ALEC] floated a brazen proposal effectively rescinding the 17th amendment to allow recall of US senators by state legislatures. Such would have subjected Senate elections to partisan-controlled legislatures. Legislatures, in turn, with a gerrymandered political party majority, would be returned to pre-17th-amendment procedures, thwarting progress toward a more democratic process. At the time of the ALEC trial balloon, Republicans had majorities in 32 state legislatures, and a similar number of governorships, presenting the prospect of multiple recalls.

By electing US representatives at large, the gerrymander issue disappears for all federal offices, increasing competition and fairness for those offices. In a state with five seats, and more than five candidates, office-seekers receiving the highest number of ballots are elected. Political parties nominating slates of candidates would face demands for statewide campaigning, exposing voters to expanded choices and information. Thus it would not matter whether a particular geographical area is red or blue, as every vote for each candidate would be virtually equal. One person, one vote.

While at-large election of representatives might pose some logistical and political difficulties for larger, more populous states, 16 states presently have three or fewer representatives, for which at-large election and campaigning would seem to be a reasonably uncomplicated proposition. Seven of those have only one member to the House: Alaska, Delaware, Montana, North Dakota, South Dakota, Vermont, and Wyoming. Another nine states have four or five representatives, where some modest barriers may exist. But that’s 25 of 50 states.

In addition to eliminating gerrymandering, at-large elections and campaigns for representatives would reduce intrastate factionalism, especially the urban-rural divide, while requiring office-seekers to develop broader platforms, perhaps with less emphasis on pork barrel appeals. Our nation is not without some experience in this scheme, since five states between 1959 and 1965 elected one at-large representative from the state

In Virginia, the most recent gerrymander dispute involving state districts generated a taxpayer cost of about $4 million; the battle continues. With both Senate and House seats subject to at-large selection and campaigning, the opportunity for cooperation between the two bodies in legislative matters may increase, as might cooperation among regions of the country.

SCOTUS has demonstrated its reluctance to wade into the thicket of a “political” question, and continues to decline to decide gerrymander cases except for those involving race or ethnicity. At the same time, across the nation in at least six states, efforts are underway to reform the boundary process, as the claims of two states [Maryland and Wisconsin] are expected to return to SCOTUS next year. PA and VA are under court-ordered directives to produce new boundaries for congressional districts.  Toward the end of 2016, President Obama and his Attorney General, Eric Holder, initiated the National Democratic Redistricting Committee as a partisan response to the successful Republican efforts to secure control of state legislatures and governorships.

At-large election of congressional representatives solves a continuing, vexing, and expensive conflict within states and advances democratic progress and reform, while decreasing voter discouragement from exercising the franchise. Nor does the transformation require a constitutional amendment—only political will. The efforts of citizens in multiple states are a clear indication of the hunger for change. Nostalgia for past practice and political organization are likely the steepest barriers to implementation. On the other hand, it may be as simple as it seems and sounds as a solution to political gridlock. 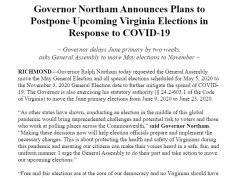 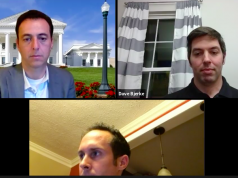 Voting During a Pandemic: Vote by Mail Virtual Town Hall 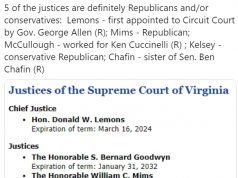 Del. Mark Levine: “For Naive Virginians Who Think the Republican Supreme Court of Virginia Will Play Fair…Let Wisconsin Be Your Guide!”

Just a reminder that Blue Virginia had this story hours before Politico and others in the corporate media. That, in turn, is thanks to @notlarrysabato...