An evening of, what, wrestling at the country club with Dave Brat and Jim Jordan? Just as a reminder of what Jim Jordan is alleged to have been involved with, see Another former OSU wrestler says Jim Jordan knew about alleged abuse, Two Lawsuits Against Ohio State Keep Jim Jordan in the Cross Hairs, ‘A cesspool of deviancy’: New claims of voyeurism test Jordan denials (“A half-dozen former wrestlers at Ohio State, where GOP Rep. Jim Jordan once coached, said they were regularly harassed by men in their training facility.”), Rep. Jim Jordan Is Named in New OSU Sexual Abuse Lawsuit, 7th Former Wrestler: Rep. Jim Jordan ‘Definitely’ Knew About Abuse, Ex-Ohio State Wrestlers Say Coach Asked Them to Take Back Jim Jordan Accusations, Ex-wrestler: Jim Jordan ‘snickered’ when told about sexual abuse, etc. As if all that’s not bad enough, there’s also Jordan’s extremism and lunacy, such as Mark Meadows and Jim Jordan Should Be Laughed Out of the House for This (“The Rosenstein impeachment production is a distraction—and a fundraising gimmick.”), John Legend Slams Jim Jordan For Calling CNN ‘Fake News’: ‘Why Don’t You Just Come Clean’, Republican gets into shouting match with Planned Parenthood executive (“The chairman of the House Freedom Caucus broke into a shouting match with the head of Planned Parenthood in the most heated exchange so far in Tuesday’s hearing.”), etc., etc. And of course, note that faaaar-right “Freedom Caucus” founder Jordan’s so extreme that former House Speaker John Boehner said of him: “Jordan was a terrorist as a legislator going back to his days in the Ohio House and Senate … A terrorist. A legislative terrorist.”

So yeah, that’s who Dave Brat’s having a fundraising reception with on September 7 at Washington Golf and Country Club in Arlington. 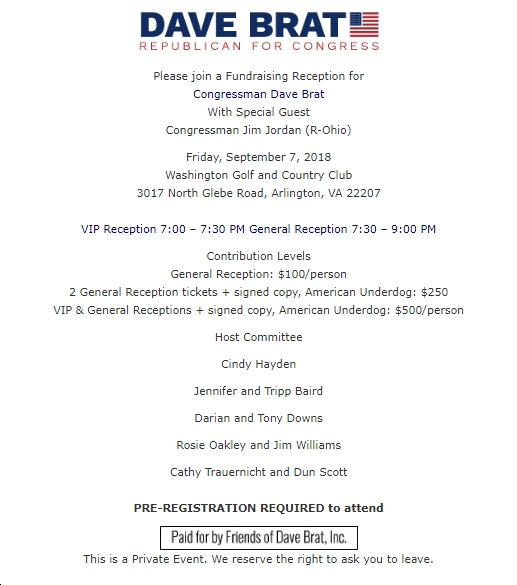