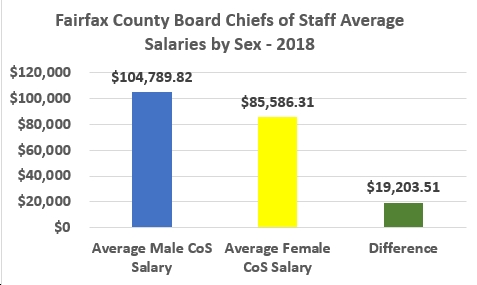 There are people out there, as I’m sure you’re aware, who don’t believe – despite evidence to the contrary – that women often make less money than their male counterparts for the same job. Some of these folks use their non-belief in the gender pay gap to argue that we don’t need the Equal Rights Amendment (ERA). These people, of course, are generally known as “Republicans,” and/or “conservative men,” and they are almost singlehandedly blocking ratification of the ERA or taking other steps to remedy pay inequity. Check out the Virginia General Assembly, for instance, where white male Republicans have repeatedly killed ERA ratification and other measures to address this problem.

Given that background, you’d think that this would not be a problem in overwhelmingly “blue” jurisdictions like Fairfax County. And it CERTAINLY wouldn’t be a problem on the overwhelmingly (8-2) Democratic Fairfax County Board of Supervisors, right? But check out that graphic, above, and see for yourself. It turns out, per statistics sent to me by Fairfax County, that female Chiefs of Staff to Fairfax County Supervisors currently make, on average, $19,203.51 less than their male counterparts…in the same exact job category (Chief of Staff). Here are the 2018 numbers by employee name (men shaded in brown, women in yellow), job title, department, annual salary and Supervisor they work for.

Also note that Hudgins, Foust and Gross are all senior members of the Fairfax County Board of Supervisors, all with double-digit years on the Board, so that’s not the explanation. Also interesting is that the highest-paid female Chief of Staff works for Democrat Dan Storck, who was first elected to the Fairfax County Board of Supervisors in November 2015. Hmmm, so what else could explain this situation?

Perhaps, I thought, the female Chiefs of Staff MIGHT be younger and/or with fewer years of experience than their male Chief of Staff counterparts? But…nope, that’s not the case. To the contrary, in fact; it turns out that most of the female Chiefs of Staff have been working for their Supervisor for many years – in most cases far longer than the male Chiefs of Staff. For instance, Mary Frances Tunick has been working for Fairfax County for something like 25 years and makes around $83k, while Taylor Holland, who is about 30 years younger than Tunick (and with the county about 4 years), makes around $91K.