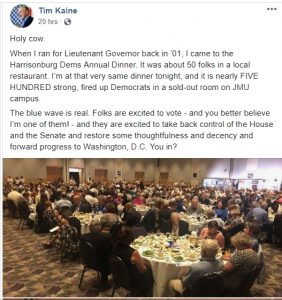 Last night, Senator Tim Kaine delivered a speech at the annual Labor Day Banquet of the Democratic Party in Harrisonburg and Rockingham County. He knocked the ball out of the park.

The speech interwove a rich variety of elements, but the central theme might be stated this way, “The Democratic Party is the ‘FOR ALL’ Party.”

Of the various ways that Senator Kaine elaborated on this theme of “For All,” the one that stood out for me was the contrast he drew between what the two parties have lately done regarding the urgent issue of health care.

The Democrats in Virginia, he noted, translated their electoral victories in 2017 into getting Medicaid expansion finally enacted (with the help of a few brave Republicans). With the passage of that measure, some 400,000 Virginians were relieved of the anxieties and potential ruination that comes from not having the kind of health care coverage that the citizens of every other advanced society enjoy by right.

And if you look at a map of where those 400,000 people live, Kaine said, you see that a very high proportion of those people live in very red districts.

How did the Democrats feel about doing something so important for the lives of people who will likely never vote for them, the Senator asked? “They feel FANTASTIC!” he answered.

Then he drew the contrast with the Republicans whose overriding priority in the new Congress in 2017 was to repeal Obamacare.

Putting aside Kaine’s account of all that was wrong procedurally with how the GOP went about it, and putting aside his account of the lead-up to that climactic moment when Senator John McCain saved the day with his thumbs-down gesture, the focus of Tim Kaine’s story was what it showed about the spirit of today’s Republican Party.

The fact that the Republican effort to repeal Obamacare failed does nothing to diminish this fact: The Republicans’ overriding priority was to pass a measure that would strip more than 20 million Americans of their health care coverage.

Once again, Kaine summoned up the image of a map showing where the people affected live. Once again, he declared, the map showed that a very high proportion of those who would have been affected live in very red parts of the nation. Those injured were the Republicans’ OWN PEOPLE.

The contrast could not be more stunning: The Democrats, Tim said, were eager to help even people who didn’t (and likely never would) support them; the Republicans were trying their utmost to hurt even people whose support helped elect them.

(Our one-time-missionary Senator also drew a glancing connection between the Democratic politics he was advocating and the notion, from another realm, of our being called to love our neighbor.)

How many Virginians — if they understood the real nature of their choice — would NOT choose the Party that envisions a good future FOR ALL? That wants American society to work well for everyone?

How many would not choose the Party of “love thy neighbor” over the Party of racial and ethnic divisions and hatreds, being led on the Virginia GOP ticket by Corey Stewart?

We are fortunate to have the Democratic ticket led this year by Tim Kaine — whose fundamental decency is so palpable — while the Republican ticket is led by a man who aligns with the advocates of racial strife, and who thought it a boast to promise to run a “vicious” campaign.

That Corey Stewart trumpets his Trumpiness affirms how our Virginia Senate race illuminates in microcosm the larger battle in America in this midterm election at this fraught moment in our nation’s history.

If our lawless and divisive President is the epicenter of our national crisis; and if the Republican Party’s devolution into the “Trump Party” represents the fortress protecting Trump’s corruption and his ongoing assault on our constitutional order; the contrast between Tim Kaine’s Democratic “For All Party” and Corey Stewart’s “For Some” Party can be a powerful message to the electorate to help magnify the Blue Wave America needs.

Totally unacceptable (but sadly not surprising) behavior towards @Michael092218 by the Youngkin volunteer or staffer https://bluevirginia.us/2021/10/saturday-news-democrats-narrow-differences-on-bidens-agenda-mull-billionaire-tax-january-6-wasnt-a-riot-it-was-war-facebook-allowed-hate-illegal-activity-to-go-unchecked#comment-5581951612

Brutal, but 100% accurate by the WaPo - "Youngkin chose to dignify a fundamental fiction that is subverting our system, rather than stand up squarely for the truth. In so doing, he proved himself unfit for office." https://bluevirginia.us/2021/10/video-photos-with-10-days-until-election-day-former-president-barack-obama-campaigns-for-the-va-democratic-ticket-at-vcu-in-richmond#comment-5581910856