The science is clear: humanity is driving climate change.

The science is clear: this is creating risks for humanity.

The appropriate responses are debated and argued — even as there are those who simply deny reality (looking at you, Donald Trump …) and work to obstruct meaningful action to mitigate climate change and reduce risks (looking at you, ExxonMobil).

A legitimate case can be made that climate change is the most serious challenge and opportunity before the nation, before humanity. Considering the serious risks and challenges, it is essentially negligence that, far too often, “climate silence” is reigning in our society. When major events occur with clear climate linkages, reporters too rarely mention climate change. Major reports on climate risks are buried within the newspaper, if even reported, because “everyone already knows this … it isn’t news …” Presidential debate after presidential debate have passed without questions about climate change.

Earlier this year, activists in Texas’ 7th District provided a template of how to change this dynamic. Several groups worked together to have a ‘climate forum’ in the Democratic primary: over 400 people attended this two-hour event which included not only the House primary candidates, but also Beto O’Rourke.

Speaking at the Houston Climate Forum. Texas should be the national leader on environmental efforts and protecting our air, water, and public lands. pic.twitter.com/yKal9xoQCk

All of the candidates were given a set of questions relevant for climate change with a ‘let us know which you are ready to engage on’. This led to substantive discussions, with both convergent and divergent perspectives on ‘what to do’ which informed voters. Among other things, one of the lead organizers (Professor Dan Cohan, Rice University) explained to me that this helped ‘educate’ the candidates: that, writ large, they were all more thoughtful related to climate issues than what he saw/perceived perhaps a year earlier.

“Whoever is elected to Congress this November, they’ll know there’s a motivated contingent of voters eager to see a more vigorous federal response to climate.

If we’ve shown that to be true in the oil patch of a red state, perhaps similar events elsewhere could provide a wake-up call to other representatives as well.”

A “similar event” is occurring next week in Virginia. The Faith Alliance for Climate Solutions (FACS) has organized a “Virginia Climate Crisis Forum” (Tuesday, 18 Sept, 7:30 pm, James Madison High School, Vienna) to which the candidates for Senate have committed to talk: Senator Tim Kaine (D-VA) and his Republican opponent, Corey Stewart.

In addition to being a critical issue, this is perhaps the policy arena where the differences between the parties and between the candidates is starkest*. Writ large, Democratic Party politicians (and members) understand that humanity is driving climate change (primarily through burning of fossil fuels), support government investment in research and develo 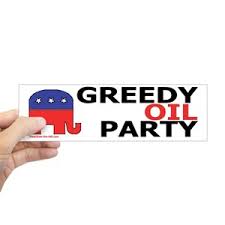 ping solutions, and have agreement on pathways to mitigate climate risks.

In contrast, the GOP earns its “Greedy Oil Party” moniker with blunt denial of basic science, rejection of paths to mitigate climate risks and seize benefits from climate actions, and promotion of policies and actions that worsen the situation and hamper ability to deal with growing climate challenges.

The two candidates are, in this case, sterling examples of this glaring divide between the two parties.

Tim Kaine has developed a strong understanding of climate issues and has real, substantive perspectives on how to move forward. Here’s a summary from his “issues” page:

Climate change imperils our planet’s future and threatens our economy. Tim believes that protecting our natural resources and environment are critical for our long-term health, safety and prosperity.

Stewart, in stark contrast, blindly parrots ignorant nonsense about climate issues as exemplified during a Republican primary debate, when he called the scientific conclusions about humanity driving climate change “a hoax,” asserted that this is all about making Al Gore rich, and (in a moment emblematic of a Trump clone) falsely claimed that the most developed countries are the “least polluters.” (For a quick window on this absurdity: while China is the top emitter globally, the United States remains solidly in second place … and Americans emit more than twice as much, per capita, as the Chinese.)

Tuesday’s evening will provide a venue for hearing directly from the Senate candidates about climate issues. This is something that should be occurring in race after race across the nation. Kudos to FACS for arranging this to happen …

In Texas 7th District, 400 people attended the climate forum in person along with others watching on Facebook. To show that Virginians care about this issue, understanding climate risks, and wish to see action from their elected leaders, filling the James Madison High School’s auditorium would be a good signal. If you wish to help send that signal, RSVP HERE.

UPDATE: See Lowell’s post about why the organizers shouldn’t have invited climate-science denying Corey Stewart and how to handle, since he was invited, Steward in the Climate Crisis Forum: Climate Science Deniers Like Corey Stewart Should NOT Be Given a Forum to Spew Their Noxious View. If So, Then Go After Them HARD!

This event is occurring on Erev Yom Kippur, the start of the most significant time in the Jewish calendar. The Faith Alliance has expressed “regret” for this conflict, highlighting that the Day of Atonement is an appropriate time for reflection on climate change.

As part of the prayers for the Day of Atonement, the Vidui, the Al Cheyt or recital of sins, is perhaps the most important. The prayer is a recitation of individual wrongs, an acceptance of failures to meet the highest of ideals. A key word is Ashamnu, or “we have sinned.”  Considering climate change within this context can provide powerful tools for reflection about personal and collective responsibilities. The following is a climate-oriented sermon prelude to a Viddui recitation:

This is Yom Kippur.

This is a night for confession.

So let us be honest.

If ever there was a time for candor, this is it.

We humans are not good with limits.

We are pushing the planet and its animal resources to the limit.

We want what we want when we want it.

We pretty much take, hunt, fish, and consume until someone or something stops us or until there is no more to be taken.

Do you remember the Viddui we will be reciting in a few minutes? It’s the Confession prayer that lists our sins alphabetically.

We abuse. We besmirch. We consume. We destroy. We excuse ourselves. We forget the consequences of our actions. We are greedy.

I could continue through the alphabet, and I should go on because, as the saying goes, although religion ought to comfort the afflicted, religion also needs to afflict the comfortable. And we truly do need to be uncomfortable tonight. Remember an alternate name for Yom Kippur is Yom Ha-Din…the Day of Judgment. This night is meant to be a time for severity.

As I wrote years ago,

We are living in a time of consequences, a time where humanity’s future (and our own, unless you are on your deathbed, futures) require confronting Inconvenient Truth, and acting in this regard.

The individual matters and we need, for Yom Kippur, to judge ourselves with “severity” — to push our own comfortable ways as to whether we ‘sin’ and damage and harm unknowingly or knowingly.

May the attendees and participates of “The Virginia Climate Crisis Forum” be prepared to judge with severity — and make their decisions for November votes with that judgement in mind.

In addition to occurring during Yom Kippur, the VA Climate Crisis Forum will occur as the East Coast (more the Carolinas than Virginia) are going to be just starting the real assessment of and recovery from a climate change enhanced/driven climate catastrophe: Hurricane Florence.

In terms of linkages between human-driven climate change and Florence, here are three major ones:

With this disastrous climate-related event ‘fresh’ in mind, hopefully Florence is something that the moderator will discuss with both Senator Kaine and white-nationalist (sympathizer/enabler) Corey Stewart.

* As to the “starkest” difference between the political parties in 2018, I’d point to the Democratic Party’s belief in the rule of law and the necessity for Congress to fulfill its Constitutional obligations for oversight compared to the Republican Party’s embrace of the Cult Of Trump and all of the cascading implications of aiding and abetting Trump’s criminal activity (from violations of the Emoluments’ Clause to election finance violations to likely treason to …).

The planet is getting hotter; we must take action. The Virginia Climate Crisis Forum, hosted by Faith Alliance for Climate Solutions (FACS), will focus on how Virginia is being and will be affected by climate change.

The forum is open to the public and free of charge. Space is limited. Doors open at 7 PM.

We regret that the timing of this event may prevent members of the Jewish community from attending because this falls on Yom Kippur. Yom Kippur is a day of atonement, providing an appropriate context for talking about climate change, taking responsibility and asking for forgiveness for our contributions to this crisis, and resolving to address our failings through personal action.