As you can see in the announcement, below, FACS invited both Sen. Tim Kaine and Republican nominee Corey Stewart to this forum. Clearly, Sen. Kaine belongs at such a forum, as he takes climate science and global warming seriously, and also has – as Adam wrote – “a strong understanding of climate issues and…real, substantive perspectives on how to move forward.”

So it’s great that FACS is giving Sen. Kaine a forum to discuss this crucial issue – arguably the greatest threat, and also opportunity (e.g., the chance to completely transform the way we produce and consumer energy), confronting humanity – with the public. Kudos for doing that! As for climate-science-denying Corey Stewart…well, I’ve got some YUGE problems with providing HIM a forum to spew his disinformation, lies, bullshit, etc. Jump below the graphic for more on that topic… 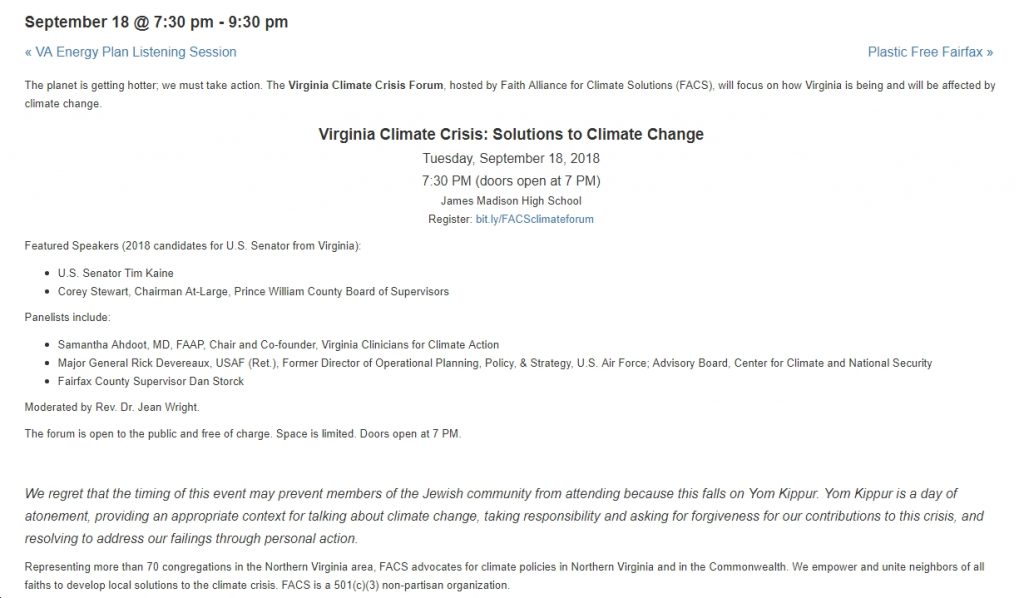 First off, let’s review what Corey Stewart has had to say on this absolutely crucial subject. As Adam wrote yesterday:

“[Corey Stewart] blindly parrots ignorant nonsense about climate issues as exemplified during a Republican primary debate, when he called the scientific conclusions about humanity driving climate change ‘a hoax,’ asserted that this is all about making Al Gore rich, and (in a moment emblematic of a Trump clone) falsely claimed that the most developed countries are the ‘least polluters.'”

It’s no better on Corey’s website, where the only mention of the word “climate” is literally “a better business climate.” Laughable. As for energy/environment, all Corey Stewart has to say about it is the worthless drivel that “Corey will work to gain independence from foreign oil and foster the development of America’s natural resources including nuclear, solar, wind, and fossil fuels.” Again, not a word about man-made global warming.

So that’s godawful enough. But wait, you say, isn’t this forum an opportunity to expose Stewart’s ignorance and idiocy to the broader public? Yeah…except that basically all the evidence, cognitive science, etc. indicates that allowing someone to repeatedly spew out lies and misinformation simply helps perpetuate those lies and misinformation. That’s just the way the human brain works, which is why you just shouldn’t do it.

Another problem is that providing a forum to someone with noxious and 100% false/discredited views, such as climate science denial — or denial of Darwinian evolution, of the earth revolving around the sun, of the Apollo moon landings, etc. — risks elevating those noxious views to a FALSE EQUIVALENCE with the accurate, factual, scientifically-based views on the issue.  In the case of climate science, note that the consensus among climate scientists is near 100% that humans are causing the problem via fossil fuel combustion, harmful agricultural practices, deforestation, etc. I mean, we wouldn’t have a debate where one “side” argued that the sun revolves around the earth, right? So why would we debate climate science, which is one of the most well-documented, solid theories in all of science?

Clearly, there’s nothing to “debate” here, other than the best ways to DEAL WITH this existential threat. Which is why it makes zero sense to allow someone as noxious as Corey Stewart – who denies that there even IS an existential threat from climate change – equal time with a serious, well-informed U.S. Senator who takes climate science and climate change seriously, a platform before a climate group. Doing so both legitimizes the noxious/false views of the denier and also sets up a classic “both sides” “false equivalency” frame that should never be allowed to happen.

But alright, now that FACS has, for whatever reason (maybe because it’s a 501 c(3) and is obligated to be “neutral” politically?) decided to provide a noxious climate science denier like Corey Stewart a forum, how should they handle it? Very simply:

Again, I’d argue that it’s dangerous, destructive and foolhardy to provide a forum to a climate science denier – or an evolution denier, moon landing denier, 9/11 denier, whatever. But having done so, what needs to happen is to POUND THE CRAP out of the nutjob – in this case Corey Stewart. If that happens, perhaps something positive might actually come out of what otherwise could simply be a disastrous evening of terrible framing, false equivalency and “both sides-ism.” Let’s hope.

“A common tactic, that can all too easily gain traction, is to ‘challenge’ scientists or those aligned with science to “debate” with the aim of either of two results:

Have the reality-based person (organization) reject the debate challenge (because they are unwilling to give credence to those peddling falsehoods) so that climate skeptics can use this in “see, they’re unwilling to debate because their arguments don’t stand up to scrutiny.

Have the reality-based person show up (and speak with caution) to have the (falsehood spewing, gamesmanship player) skeptic run rings around them on the stage to ‘win the audience’.”

This is clearly a fundamental, possibly fatal, flaw in the entire idea of inviting a falsehood-spewer to “debate” with someone grounded in, and respectful of, fact-based information.