Here are some comments from Virginia elected officials and candidates on today’s extraordinary (in the case of Dr. Ford), and bizarre/disturbing (in the case of Kavanaugh) Senate hearings. Note that these are largely from Virginia Democrats, as Virginia Republicans have been quiet for the most part. Do note, however, that the Virginia GOP has been tweeting and retweeting its support for Kavanaugh all day, with predictable drivel like “Join us in standing with Judge Kavanaugh #IStandWithBrett” If you were disgusted with Republican support today for Kavanaugh, make sure you vote Democratic up and down the ballot on November 6! 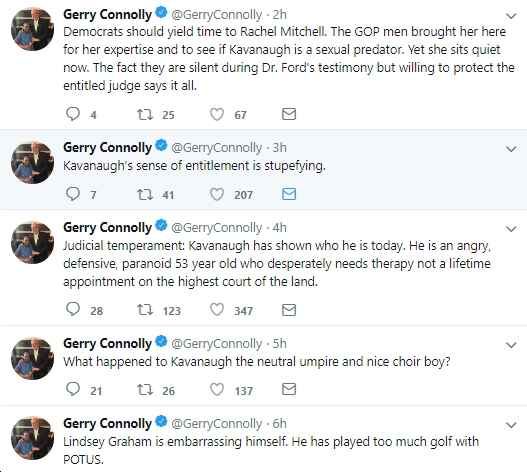 I’m in awe of Dr. Ford’s bravery and poise in an unimaginably difficult and needlessly antagonistic situation. If you need support, care, or someone to talk to, reach out to Virginia’s 24-hr sexual/domestic violence hotline by phone 1-800-838-8238, or text 804-793-9999.

Today Dr. Ford is standing up to tell her story.

For daring to speak out, she has been met with powerful people trying to silence her, Senators who refuse to investigate her allegations, and President Trump’s attacks.

I believe her, and I support survivors. #BelieveSurvivors

Today as Dr. Ford is bravely telling her truth, many women will be reliving their own painful assaults. They deserve our support and compassion because we #BelieveSurvivors

This was an important moment in Kavanaugh’s testimony just now.

When @SenatorDurbin asked if Kavanaugh wanted the FBI to investigate the allegations, he responded with silence.

If Kavanaugh really wanted the truth to be known, he’d be open to an FBI investigation. Period. https://t.co/3RnFjTxXew

No. Kavanaugh repeatedly avoided answering questions and attempted to cloud the truth about the allegations against him.

He showed Americans exactly why he’s unfit to be a Supreme Court Justice. He’s done that since he was nominated. https://t.co/kgD2DfJilb

Watching the testimony of Dr. Ford, I am impressed by her strength and poise, and saddened by the pain her questioning is causing so many survivors of sexual assault. https://t.co/ZgaVmUbh02

Tip:
If you’re being nominated for a nonpartisan position as a neutral arbiter on the Supreme Court, attacking “the left,” “Democrats,” “the Clintons” and “the media” in your opening statement while noting there will be reprisal for years to come is, well, disqualifying.

So many reports of people responding to Dr. Ford’s Senate testimony–composed yet honestly emotional, sharing her painful private experience and her professional expertise, forthright & credible–with tears, their own stories, and as @MarkHerringVA says, awe at her bravery. https://t.co/iIosNs0J1t

The contrast in today’s hearings are clear. Dr. Ford came off poised, honest, and brave. Whereas Brett Kavanaugh is wearing his anger and hyper-partisan beliefs on his sleeve with pride. Kavanaugh is simply unfit to sit on the highest court of our country. #IBelieveDrFord

There is no excuse for those who commit sexual assault. No calendar, no letters, no hiding behind teenage antics. I #BelieveSurvivors, and I believe #ChristineBlaseyFord.