From the Jennifer Wexton for Congress campaign:

LEESBURG – Last week former House Speaker Newt Gingrich declared that the press had “earned” the label “enemy of the people.” Gingrich specifically singled out cable network CNN for criticism, despite the fact that a pipe bomb addressed to former CIA Director John Brennan had been delivered to CNN’s headquarters in New York City the day before, leading to an evacuation of the building. The day after Gingrich’s comments, another bomb was mailed to CNN, this time addressed to former Director of National Intelligence James Clapper. 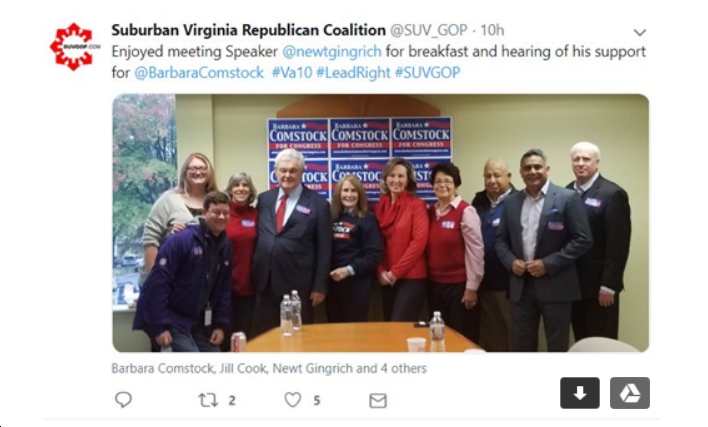 Far from criticizing these remarks and similar comments by President Trump, Congresswoman Barbara Comstock quietly held an event with Gingrich on Saturday morning. Comstock’s campaign did not advertise her appearance with the former Speaker, but a picture was shared by the account of a PAC which supports her:

Given the recent hate-fueled violence which has seized the country’s attention over the past week, Gingrich’s comments are deeply irresponsible and must be repudiated. Congresswoman Comstock should immediately clarify whether she also believes that the press are the “enemy of the people.”