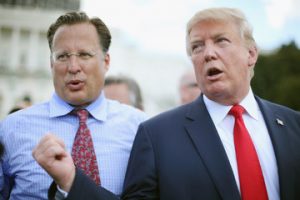 “The world stands on the brink of failure when it comes to holding global warming to moderate levels, and nations will have to take ‘unprecedented’ actions to cut their carbon emissions over the next decade, according to to a landmark report by the globe’s top scientific body studying climate change” – Washington Post, 10/8/18

The news is grim, and still our representative, Dave Brat (R-VA07), insists that the free market will take care of climate change. He continually supports legislation to cripple EPA’s ability to deal with the rapid heating of our only planet. He supports his president, Donnie, in withdrawing from the Paris Climate accords and in cancelling President Obama’s Clean Power plan. He believes that a rich economy like ours doesn’t have to worry about climate change.

And, you can be sure that “oil and coal” Dave Brat can never change his position. To admit that the Federal Government needs to act now to save us from a climate disaster would require him to abandon his belief that the free market will fix everything. His entire political philosophy is based on that premise. So if we reelect him, you can be sure that he will continue to take no action to try to mitigate the approaching crisis.

Compare that with Abigail Spanberger, who in an e-mail last January told me:

“This is an accelerating problem, one that can be solved only with a massive unified shift in our environmental policy. Unfortunately, many of our policy makers don’t see it that way. I was present when my current Congressman, Rep. Dave Brat, said jokingly in a town hall, ‘Do I deny climate change? No, the climate changes all the time!’

He’s trying to poke fun at one of the greatest and most imminent threats to our economy, our national security, and our way of life. To dismiss it so flippantly is unconscionable. We need leaders in Congress who recognize this threat and have the courage, the foresight, and the political will to act accordingly. I will bring that leadership to Virginia’s 7th District.”

I am in my 75th year, so it is likely that I will not live to see the really bad climate stuff that is coming. But, I’ve got babies and grandbabies who will live to see it and it worries me. When storms are far more violent, when wild fires are more prevalent, when sea levels have risen considerably, when summer temperatures are unbearable, when many species have become extinct, when humans are facing draught and famine, what will my loved one’s think of us? “They were too selfish to act to save us from this.”

If you don’t come out to vote for Abigail Spanberger, and encourage all your friends and neighbors to do so too, “oil and coal” Dave will be reelected and we will lose a voice for sanity in Washington. We are running out of chances to save the future.