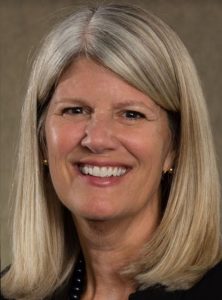 It’s not even election day 2018, and things are already heating up for Prince William County local elections in 2019! See below for a press release I received from Ann Wheeler, for instance, who earlier this afternoon announced her candidacy for Chair of the Prince William County Board of Supervisors — the job currently held by the “disgraceful” Corey Stewart (as the Washington Post accurately described him in their endorsement of Tim Kaine last night). I’m also hearing that at least one other Democrat will be getting in the Chair race, plus most likely Corey’s fellow Republican, Board member Marty Nohe, and who knows how many others. The bottom line is that people are salivating to boot Corey Stewart out of the Chair job; that is, if he doesn’t quit first after Tim Kaine crushes him on 11/6!

Haymarket – Community leader Ann Wheeler announced her candidacy Monday for the Chair – At Large, of the Prince William County Board of Supervisors.

Ms. Wheeler has served the public and Prince William County actively since she moved here in 2001. She has spent the last fourteen years as a NOVEC Board Member and the last two years on the Hylton Performing Arts Center Board. She recently completed a two-year term as President of the Prince William Committee of 100, a non-partisan civic organization that provides a forum to raise awareness of County issues.

During her years as Chair of the Prince William County Board of Social Services from 2010-2011, Ms. Wheeler mastered the operations of the County and its budgeting process. Ms. Wheeler attended the PWC Community Leadership Institute in the Fall of 2004. She then served on various community and civic boards over the years, including the Stonewall Middle School Advisory Council (2010-2011), Board of Social Services (2006-2011), the Shelter Lakes Homeowners Association (2004-2007), the Gainesville District Budget Committee (2005-2007) and the Prince William County School Northern Boundary Committee (2005 2006).

All these positions have all provided Ms. Wheeler with a clear perspective on how our County has tremendous opportunity that has not been realized over the last 12 years. Ms. Wheeler outlined several policy areas on which she would focus on as Chair of the Board of Supervisors to realize Prince William County’s potential: “I will be a Chair who can bring vision, leadership, integrity and inclusivity to the position. Prince William County’s reputation has declined and suffered throughout Virginia and the country with the divisive and embarrassing rhetoric under Corey Stewart’s 12 year tenure. Mr. Stewart’s limited vision and shortsightedness has left our County with some of the most overcrowded schools and worst traffic in the region. The election in 2019 must see a change in the direction we have been heading.”

“I will ensure our school system is adequately funded. The number of schools has not kept up with development. We have the largest class sizes in the state and the lowest paid teachers in the region. The Board of County Supervisors controls the funding for our schools, and they have woefully underfunded them. When elected to the Board, I will make it one of my primary missions to make sure we build the schools we need as well as pay our teachers what they deserve.”

“I will make Prince William County attractive and welcoming to large and small prospective businesses. Every four years we hear candidates’ campaign on bringing more commercial business to the county; yet our homeowners are still paying over 80% of the County real-estate taxes. This needs to change. The Board’s goal of adding only 500 jobs a year, in a county of 458,000, is shortchanging our taxpayers.”

“I will bring inclusiveness for all citizens to Prince William County. As Chair of the Board of Social Services, I developed a clear sense of the key challenges facing our large and diverse county and the issues that must be addressed. I am running for Board Chair to make sure our future for all areas of the county are bright and prosperous.”

Before moving to Prince William County with her husband, John, and their two daughters, Ann spent fifteen years working and consulting in the energy industry. She graduated from Tufts University with a degree in Mechanical Engineering and earned an MBA from the University of Chicago, specializing in Finance.