In addition to federal races, we of course have a special election for Virginia House of Delegates going on – between Democrat Carter Turner and Republican Joe McNamara in HD-08 (Roanoke County, Salem City, Montgomery County, Craig County) for the seat of former Del. Greg Habeeb (R), who announced his resignation back in July. This is a solidly “red” district (Trump won it by 30 points), but if Democrats pull off the upset – and Carter Turner looks to be running a very strong race! – it would mean a 50/50 tie in the Virginia House of Delegates. So it’s worth paying attention to this race as well, even as we’ve mostly been focused on Congress.

Today, we have a reason to talk about HD-08, as fundraising numbers are now in for September. See below for a snapshot, and note that the Democrat (Carter Turner) outraised the Republican (Joe McNamara) by a significant margin ($81k-$66k), with an ending cash-on-hand balance more than twice that of McNamara’s ($80k to $33k).

The details of McNamara’s report are also interesting. For instance, out of the $66k McNamara DID manage to raise, only $17.7k of that was actual cash contributions (the rest was “in kind” from the Republican Party of Virginia and House Republican Caucus Committee). And of that $17.7k, almost all of it is from either corporate interest groups (e.g., the Virginia Dental Association, the Virginia Beverage Association, Altria Client Services) or from his fellow politicians (e.g., Friends of Greg Habeeb, the Roanoke County Republican Committee, Friends of Glenn Davis, Jeff Campbell for Delegate). In contrast, Turner’s contributions come heavily from regular people, not from corporate interests or fellow politicians. To me, that difference is telling when it comes to predicting what type of delegate McNamara or Turner would be… 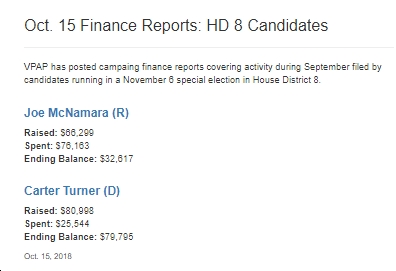