One good thing about not being a candidate for office is the reality that I no longer have to be measured in my response to events. Which is why I feel perfectly comfortable saying the President of the United States is actively inspiring and radicalizing domestic terrorists.

While we’ve grown numb to the fact that the Republican Party is indifferent to domestic terrorism that involves a) a gun and b) a white shooter (read: Charlottesville, Las Vegas, Aurora, Sandy Hook etc), my blood is boiling knowing that of the 24% of Americans who identify as Republican, 91% (!!!!!!!!) of them approve of a president who on a daily basis calls the press the enemy of the people and encourages violence against American citizens and political opponents. Don’t believe me, listen to him yourself.

Donald Trump’s rhetoric toward his fellow American and the resulting attacks are unlike anything this country has seen before. The Oklahoma City Bombing by Timothy McVeigh which resulted in the death of 168 Americans was an attack by a lunatic on government as a whole, not a directed attack against political opponents inspired by the president. The 2001 anthrax mailings that resulted in the deaths of 5 Americans were believed to be perpetrated by Bruce Ivins, someone who was involuntarily committed for mental health issues and who used the September 11th attacks to launch his. Again, this was an attack on government writ large, not an attack inspired by the president.

If you look at some of the targets in this most recent domestic terrorist attack, they all have one thing in common. Maxine Waters, CNN, Robert De Niro and Hillary Clinton have all been targeted by President Trump using his two preferred methods of attack; twitter and rallies.

Donald Trump infamously called on 2nd amendment folks to do something if Hillary Clinton were elected. Maxine Waters is often vilified during rallies and talked about as an extreme threat to the nation. Reporters from all news outlets, to include CNN, are caged in a press box during events where attendees are encouraged to heckle and jeer. 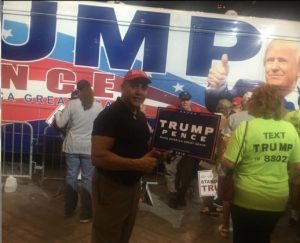 Perhaps more appalling than Donald Trumps actions, is the lack of action, or outright support from his Republican Party. “Conservatives” have been repeating conspiracies about a false-flag operation at a feverish pace. Candace Owens, the future of the Republican Party, put the odds of the suspect being a conservative at 0%, only to take the cowardly way out and delete her tweet when the culprit ended up being a certified Trump cultist. Geraldo Rivera actually admitted to his stupidity and acknowledged the fact that this was done by a deranged right winger.

This president is given the benefit of the doubt too often, when he has shown repeatedly that he doesn’t deserve it. As the old saying goes, “when someone shows you who they are, believe them.” You would have to be willfully ignorant to not draw a direct line between the actions taken by this man to the president that actively encourages him on a daily basis. Now is not the time to call on both sides to come together. Now is the time to demand that congressional Republicans stand up to a president who is doing his very best to get Americans killed because he has an utter disregard for human life.