If some random extremist/crazy person endorsed your candidacy, would you trumpet it all over the intertubes? Of course not. So why is it a good thing if that extremist/crazy person is not random at all, but Vice President Mike Pence? I guess we should ask Rep. Dave Brat and Denver Riggleman (R-VA05) (see their tweets, below, welcoming Pence’s support), and also Rep. Scott Taylor (who will undoubtedly tweet gratitude any minute now).

But wait, you ask, what’s extremist/crazy about Mike Pence? Let us count the ways:

I could go on all day with this, but you get the point. Pence is a dangerous theocratic extremist, the exact opposite of the “libertarian” claims made by the Dave Brats and Denver Rigglemans of the world. The question is, in the end, will the embrace of someone as crazy and extreme as Pence turn out to be a net positive, net negative, or a wash politically for Brat/Riggleman/Taylor. Let’s do everything we can over the next 14 days to make sure it’s a big net NEGATIVE.

P.S. Oh yeah, almost forgot that Pence endorsed Rep. Barbara Comstock (R-VA10), the same person who audaciously – and falsely – claims to be some sort of “independent voice.” Hint: she is NOT! 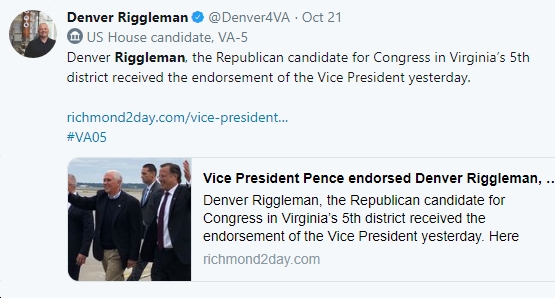