Hi. I’m a Democrat. I vote for Democrats, and I work to elect and re-elect Democrats. Maybe that sounds tribal, but it’s not. I am a Democrat because I believe that Virginia, and America, are a better place–more just, more fair, more compassionate, more healthy and economically successful–when we elect Democrats.

And so I’ve worked hard to help Democratic candidates all over the state. They don’t even have to be in my district or represent me for me to want to help them. (Mine, thankfully, don’t really need my help.)

That’s why I’ve driven Matt de Ferranti around canvassing in Arlington, my kid navigating from the back seat. That’s why I’ve attended his events and donated to his campaign. Because he shares my big-D Democratic values, and I know Arlington will be a better place with him on the County Board.

And I’m not alone. I’ve watched so many other Democrats working hard to help Matt win this race. My friends in the area, people in local grassroots activist groups, and elected officials have been working for months. During this election year, where current and former Democratic leaders like Senator Kaine, Governor McAuliffe, former Congressman Perriello, Lieutenant Governor Justin Fairfax, and Congressman Beyer, have been campaigning every day zig-zagging across the state for Congressional races and other local races, every one of them has spent time–often returning over and over–campaigning with Matt de Ferranti.

Knowing how hard we’re all working to elect Matt, you can imagine how I felt to discover Matt’s opponent, incumbent Board member John Vihstadt–a “former” Republican who runs as an Independent to prey on uninformed voters, and who clearly espouses exactly the kind of conservative ideology I oppose–sent out lit with these three “Democrats” splattered on the front! 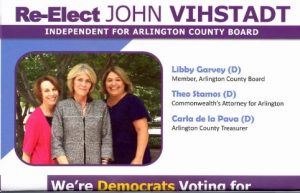 Sorry, not sorry. I don’t understand how you can run for office and call yourself a Democrat, ask for and take advantage of the support and help of your local Democratic committee, and then help someone who’s running AGAINST another Democrat. Sure, maybe you’re friends with the other guy, it’s a small world, people are entitled to have Republican–er, I mean “Independent” friends. Fine, don’t campaign for the Democrat maybe. But to sit there smiling on the lit? Giving this guy the creds to be able to pull off the claim that he’s “Independent?” That is just 100% wrong. And this isn’t even the first time they’ve supported Vihstadt against a Democrat! They did it in 2014 and 2016 too!

You have to really wonder about these “Democrats.” One, Arlington Commonwealth’s Attorney Theo Stamos, filed an amicus brief to try to stop Governor McAuliffe from restoring the rights of former felons, and thinks it’s “silly” to discuss ending cash bail. Quite the “Democrat,” right? Another of these smiling “Democrats,” Board Member Libby Garvey, routinely votes with Vihstadt, and the two of them fought against the Columbia Pike street car project (which Democratic leaders and Governor McAuliffe’s Transportation Secretary supported), claiming that it would be too costly to Arlington residents, despite considerable evidence to the contrary. I don’t know much about Arlington Treasurer Carla de la Pava, but I certainly have my doubts about her too now.

So, what should the Arlington County Democratic Committee do? Well, it’s pretty clear from the DPVA Committee Chairs handbook that they can kick “Democrats” out of the committee for endorsing someone running against a Democrat. Every time they’ve campaigned against the Democrat in the past, they have been allowed to leave the committee, campaign for Vihstadt, and then magically return in time to run as Democrats with the endorsement and help of the committee. Can someone help explain to me why this is allowed, why someone who is directly undermining my hard work to elect a good Democrat, undermining the hard work of every other Democratic activist and elected leader, is allowed to turn around next year and ask for and receive support from the same Democratic party they’re undermining right now?