Dave Brat has recently been found by Washington Post reporter Laura Vozzella to have “heavily borrowed” from the writings of Ben Bernanke when he was a professor at Randolph-Macon College (see HERE a hilarious video of Brat running away! running away! from a student who tries to get him to address this charge.  Hmmm….if he has confidence in the legitimacy of his work, why doesn’t he simply stop and say so?).

Let’s put Brat’s “borrowing” in the context of his general tendency to inflate his academic record, which tracks perfectly with his consistent inflating of his accomplishments as a Congressman and his propensity for telling flat-out lies about his opponent Abigail Spanberger – even after he’s been called out on them. 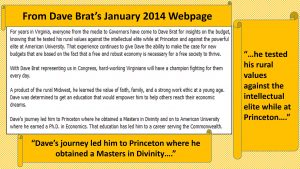 Brat came on the national political scene in 2014 when he challenged Eric Cantor in the Republican primary for VA-7 and – to everyone’s astonishment – won.  His website (since scrubbed, but see screenshot), implied very strongly that he’d attended Princeton University.  A normal understanding, at any rate, of testing “rural values against the intellectual elite while at Princeton” and of a journey leading “to Princeton” and the obtaining of a Master’s of Divinity degree there is that the person went to Princeton University.

Brat’s pretense came to the notice of Princeton University, which set the record straight.  The Princetonian (the student newspaper) published THIS article from which the following quote is perhaps the most telling:

“Republican Congressional nominee David Brat is not the first individual to have made the assertion that he was educated in Princeton – the town, that is – while remaining ambiguous about the exact institution that he attended.”

The article also describes the 1991 burglary of the Princeton Registrar’s Office and the theft of all the materials necessary to forge transcripts.  Brat cleverly skipped actually breaking the law, but gets all the borrowed glory of a Princeton degree without the risk of going to jail.  Smart.

One would think that Brat would be sufficiently shamed by The Princetonian article to have stopped all such posing – but no.  The man who reminds us on a daily basis that he went to seminary, has a PhD in Economics, and taught ethics for 20 years not only has not shied away from public self-puffery, but he has even expanded upon it, drawing into his scheme James Madison.  Poser’s gotta pose.

In his speeches (links in #2 below), Brat has claimed that:

3) Madison drafted the Constitution as he did based on his studies of the Bible.

To set the record straight: 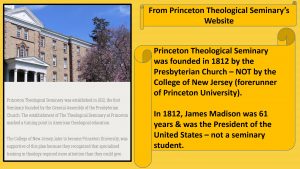 1) PTS was founded in 1812 by the Presbyterian Church, not by the College of New Jersey.  At that time, James Madison was 61 years old, he was the President of the United States of America, and he was too busy fighting the War of 1812 to be attending seminary; 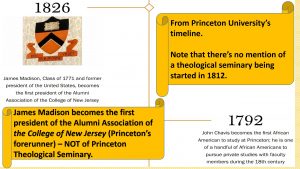 3) Princeton University’s website has a timeline of the institution’s history and it does not mention any important development in 1812 – which you’d think it’d do if PTS had split off from it that year.  It does, however, note that after being President of the United States, James Madison became the first president of the Alumni Association of the College of New Jersey – NOT of PTS.

4) Madison was so protective of the need for keeping religion out of government (for the sake of the health of both), that he didn’t approve even of paying chaplains at public expense as he feared allowing the “Ecclesiastical Bodies” to get their noses under the tent:

“Strongly guarded as is the separation between Religion & Govt in the Constitution of the United States, the danger of encroachment by Ecclesiastical Bodies may be illustrated by precedents already furnished in their short history.”  (Detached memorandum, ca. 1823. Manuscript. James Madison Papers, Manuscript Division, Library of Congress (133.01.00) [Digital ID# us0133_01]).

If Dave Brat were wise and truly cared about both democracy and the religious liberty that Madison thought was critical to the health of religious worship, he would take this lesson from history:

“In the fight to pass the Virginia Bill for Religious Liberty, [Madison] shamed Christian conservatives–who tried to insert the words ‘Jesus Christ’ in an amended preamble–with these words: ‘The better proof of reverence for that holy name would be not to profane it by making it a topic of legislative discussion….’” (Joseph Loconte).

But Dave Brat is no James Madison.  And he cares little for ethics or religious liberty or democracy.  Dave Brat is all about Dave Brat.  He has taken advantage of the religious convictions and the patriotism of his base, manipulating their heartfelt feelings and convictions to further his own career.  He is loyal to neither principles nor people and he needs to be shown the door on November 6th.