For most of that period, believe it or not there was no Twitter (launched in July 2006), no Facebook (opened to everyone on 9/26/06), a very early/clunky version of YouTube (got going in 2005 but really didn’t hit its stride until 2006-2008), no Instagram (launched in 2010) – basically not much we know today as “social media.” I know, I know – how did we LIVE back then? Primitive! LOL Of course, there were Yahoo groups and political blogs galore. And there were still-fairly-vibrant newspapers, albeit just prior to the almost complete demolition of their business model – newspaper publishers  lost over half their employment from January 2001 to September 2016! – by Craigslist, the intertubes, etc.

In our book, “Netroots Rising: How a Citizen Army of Bloggers and Online Activists Is Changing American Politics,” Nate Wilcox and I talked about the early days – the “rising” part – of this phenomenon, from 2002 through 2006 (including stories on the Howard Dean and Wesley Clark presidential campaigns; the Draft James Webb movement and Webb vs. Allen campaign; the fall of Tom DeLay; etc.).

Back in the early/mid 2000s, as Lamar White, Jr. notes below, calling yourself a “blogger” was kind of a “badge of honor.” However, even back then, it was very clear that the corporate media was NOT going to be welcoming citizen journalists into their “club.” Part of it, as far as I can tell, is that the idea of citizen journalism – and the rise of communications and video tools to allow almost anyone to  go out and cover events, post them online, and have others read what they wrote – posed a (perceived) threat to traditional, “corporate media” journalists. I mean, if citizens could grab a portable video camera, go cover a political event, interview candidates, break stories, post them up within minutes or even in real time, etc., and in many cases do so faster/better than the corporate media could or would – and with minimal “overhead” –  then where might that leave them? (note: see here for filmmaker Eric Byler talking about the “democratization of technology” and its implications for how news is created, distributed and consumed)  Also, on a more subjective level, I can see how these rapid changes felt threatening to journalists who had gone to school to learn their trade, had worked hard to get where they got, and who now saw the entire industry changing fast around them.

The problem is that, as always, denying reality or hoping it will go away doesn’t make reality actually go away. In Virginia, for instance, the relentless, clearly intentional decision by the corporate media to refuse to acknowledge “bloggers,” to credit them for their (many, many) scoops, to link to their stories (even as Virginia bloggers, as far as I can tell, almost ALWAYS link/credit original sources), to allow them into their “club,” has been a consistent theme at least since I’ve been involved, starting with Raising Kaine in 2005. For instance, the Virginia Public Access Project (VPAP), while it does some excellent work in other ways, has obstinately refused – albeit with some bizarre exceptions – to include what it considers to be “blogs” in its morning news service. Of course, it’s absolutely not a coincidence that VPAP is controlled/funded to a large extent by the political class, the biggest Virginia corporations (e.g., Dominion) and…the corporate media itself. In that context, VPAP’s decision to exclude blogs that might have the gall to challenge the “Virginia Way” – or Dominion, the corporate media, etc. – simply don’t fit into their “club.” I get that, even as I think it’s obnoxious at the bare minimum.

With that, check out Lamar White, Jr.’s comment below. The backstory is that Lamar broke the story of Sen. Cindy Hyde-Smith’s comments about itching to be in the front row of a public hanging. Lamar broke that story on The Bayou Brief, “Louisiana’s first and only statewide, non-profit, member-supported, and digitally-oriented news publication.” That was a great scoop, and for good reason “practically every major publication in the country has contacted [Lamar] for comment.”

And yet, over and over again, when cited in corporate media stories that credited Lamar for his scoop, the corporate media referred to him as a “blogger”/”liberal blogger”/”local blogger”/”progressive blogger”/”tireless leftist blogger”/etc. (see the Clarion Ledger, Newsweek, CNN, The New Orleans Advocate, Business Insider, etc. Sometimes the word “journalist” is throw in there as well, but not consistently, even though of course Lamar White IS a journalist – a damn good one at that! – and has been for many years now, even if he doesn’t work for a corporate media outlet. Also, as Lamar notes in his Facebook post, he has a degree in English from Rice, a law degree, and has been writing for publications “since I was 17.” According to Lamar, the corporate media uses the word “blogger” (or “left-leaning blogger” or whatever) as a “pejorative,” particularly if one of those “bloggers” “out-scoops them on a story” (which happens all the time – Ben Tribbett/”Not Larry Sabato” and the Raising Kaine/Blue Virginia crew have done it a gazillion times over the years, and the Virginia right-wing blogs frequently have provided FAR better/more detailed/real-time coverage of political conventions, elections, etc. than the corporate media has).

So yeah, I mean I can talk about how my educational and professional background – not to mention my 13 years now closely covering Virginia politics – makes me FAR more qualified to write about this stuff than someone just starting out who knows little if anything about Virginia. But since it’s Thanksgiving, I’ll just “give thanks” for people like Lamar White, Jr., and the many citizen journalists here in Virginia who have been busy doing the job that the corporate media should be doing – but increasingly doesn’t do – for many years now. Hopefully, the newest wave of post-Trump-election progressive activists will add to these ranks, even as the Virginia corporate media shrinks further (see “Tronc”‘s demolition of the Daily Press and Virginian-Pilot; layoffs galore at the Richmond Times-Dispatch, etc.), so that we can keep shining a spotlight on the corruption, scandals, and shenanigans going on in Richmond, among other things. And yeah, it would be ideal if the corporate media would lose the (bad) attitude and start realizing that in today’s world, there are many way to gather information and to present news, and that we’re never going back to that industry’s “glory days”… 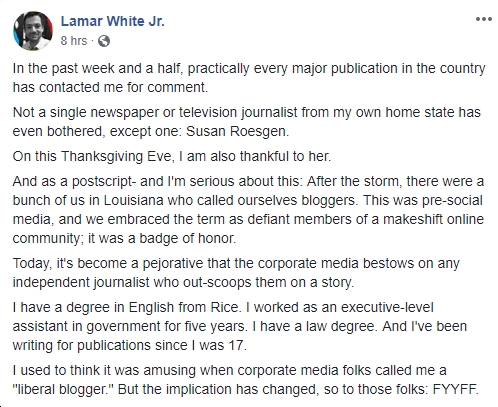 Maps of VA Elections From 2001 to 2021 Show Democratic Collapse in Rural Areas. The Question Is Why – and What Might Be Done...