This is truly beyond parody — 24 hours after Democrats nominated Jennifer Boysko for the SD33 special election on 1/8/19 to replace Congresswoman-elect Jennifer Wexton with 82% of 2,644 votes cast in a “firehouse primary,” Republicans did…..see below. Seriously, a few dozen old, white Republicans at a “mass meeting” just nominated former Del. Joe May by a whopping vote of 36-33. And yes, that would be 69 total votes cast by Republicans in SD-33 a few minutes ago, compared to 2,644 votes cast by Democrats yesterday to select their nominee, Jennifer Boysko. As one Democratic friend of mine just put it to me, “We should call Jennifer Boysko ‘Senator now’…if this is all they’ve got, please!” Well said. Virginia Republicans are a complete joke, part infinity.

P.S. Yes, that’s a photo of John “Anti-Semitic Joke Dude” Whitbeck announcing the results. Did I mention that the Virginia Republican Party is a complete joke? Oh yeah, I guess I did. LOL 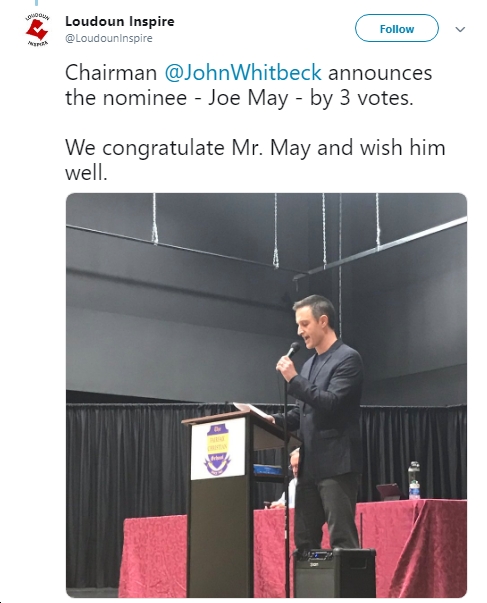 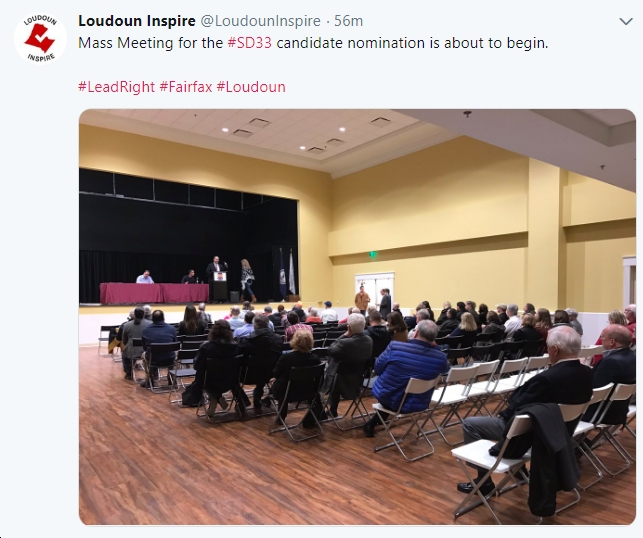 Thank you to West Potomac HS's (@theWPboard) Robert Rigby for reminding us of the record of this candidate against @ireneshintweets - hate has no place in Virginia
@EqualityVA https://twitter.com/bluevirginia/status/1421824572257624067

Vicious anti-trans rhetoric from the same person (the Republican nominee for VA House of Delegates vs. Dem @ireneshintweets) who compared being a conservative in the Fairfax County public schools to being a Jew in Nazi Germany. https://bluevirginia.us/2021/07/greater-washington-jewish-community-dismayed-by-two-va-gop-house-of-delegates-candidates-making-offensive-remarks-minimizing-the-holocaust#comment-5477833944 h/t @RobertRigbyJr1