I do not claim to be a legal expert, and I don’t even play one on TV. But I do read and watch legal experts, and from what I’ve gathered, Trump’s firing of Jeff Sessions and appointment of Matt Whitaker have created an extraordinarily interesting strategic situation for Robert Mueller and Rod Rosenstein to navigate.

Because both of these men –particularly Mueller, as well as the A-team around him — are quite able, and because I’m finding the strategic challenge (as I understand it) to be so complex, I sure would like to be able to hear these very bright legal minds think through how best to play their cards in order to fulfill their mission of defending the rule of law in America against a President who so regularly abuses his power to place himself above the law.

(BTW, I’m not saying that Mueller and Rosenstein’s position is not a winning one. I’m actually rather hopeful on that score. I would bet that Trump will be unable to protect himself. What I’m saying is that envisioning how this will unfold seems unusually difficult in unusually interesting ways.)

Here are the factors that I believe combine to create the strategic complexity of this moment for the broad, many-faceted Mueller investigation:

Which would mean that Whitaker is not really the Acting AG.

(Wondering: are there any rules — written or unwritten — that would prohibit the truth-seekers on the Justice side and those Democrats in the House — like Adam Schiff, Jerrold Nadler, Elijah Cummings — from conferring together on a coordinated strategy for dealing with the situation they face?)

I expect I’ve left out some important factors that would rightly figure into the strategic thinking of Mueller, his team, and Rosenstein. But these are the main ones that I’m aware of, and believe to be true that would factor into conceptualizing the terrain on which these defenders of the Constitution and the rule of law must make their choices as they battle a President bent on obstructing their efforts to see that justice is done.

And I’m imagining that if I were a fly on the wall — but presumably with a better brain than a fly’s — it would be a pleasure to hear them make their decisions, and map out their contingencies, similar to the pleasure of watching a chess master deploying his pieces. 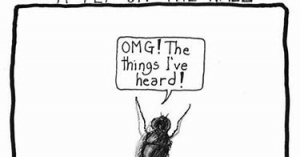