Last Saturday, I decided to drive to Farmville and canvass there for a full day, as the Cockburn campaign staff from the Warrenton office we visited the prior week had said that they had few volunteers in Farmville and needed help.  Since AccuWeather was showing continuous rain in Northern Virginia but a sunny day in Farmville, heading there seemed like the smart thing to do. 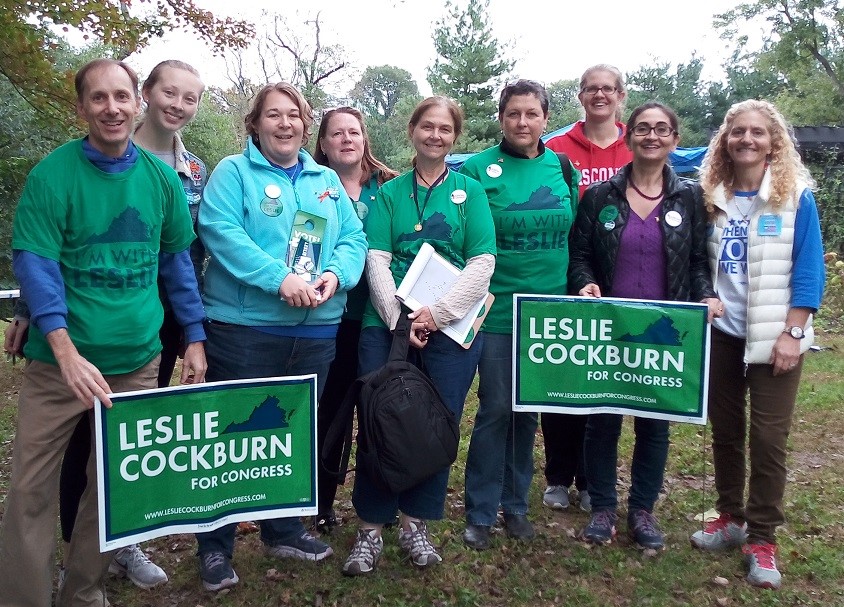 I left at 7 am and arrived at 10 am.  Farmville is a town of 8,200 residents, one hour southwest of Richmond and is about the geographical center of the Virginia triangle.  It is home to Longwood University, and the contrast between the manicured campus and the rest of the town stuck in the 80’s, was striking.

Farmville also used to be home to R.R. Moton High School, an all-black school which suffered from such terrible conditions in the segregated state, that students sued the then all-white School Board, and the case was later bundled into the landmark Brown vs. Board of Education case that overturned school segregation in the US.

But after the Brown decision in 1959, the Prince Edward County Board of Supervisors refused to appropriate any funds for the School Board, effectively closing all public schools rather than integrate them. Most black students were denied access to any formal education as the public schools remained closed for five years. 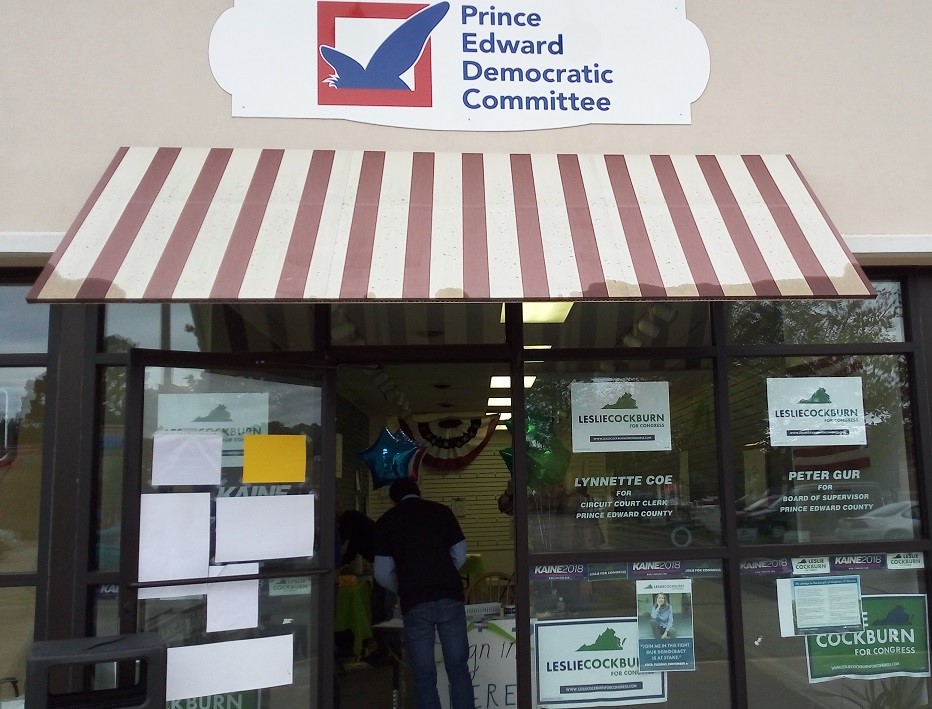 Upon arrival in town, I was greeted by several giant Corey Stewart signs. The Cockburn campaign was located in the Prince Edward Democratic Committee office, a small space in a strip mall on Main Street. The office was run by two young, dedicated students, helped by two retired volunteers.  Only one other canvasser was there. I took three canvassing turfs, a total of 100 doors, and a big stack of Cockburn “Vote on Nov 6th!” door hangers.

The first canvassing list covered two apartment complexes.  All who answered their doors in the first complex were African-American women.  I looked through my three walking lists and realized that all of them were about two-thirds women. This confirmed my impression from earlier canvasses that the Democrat/Republican gender gap is higher than it had ever been.

The second block was a newer complex across from a Holiday Inn Express, the typical three-level apartment buildings with stairs outside. When I had canvassed similar apartments in Loudoun County, most people didn’t answer their door, because they are over-contacted by solicitors and canvassers. Not the case here in Farmville. Many people came out and talked, and it became obvious that no canvasser had been there before. 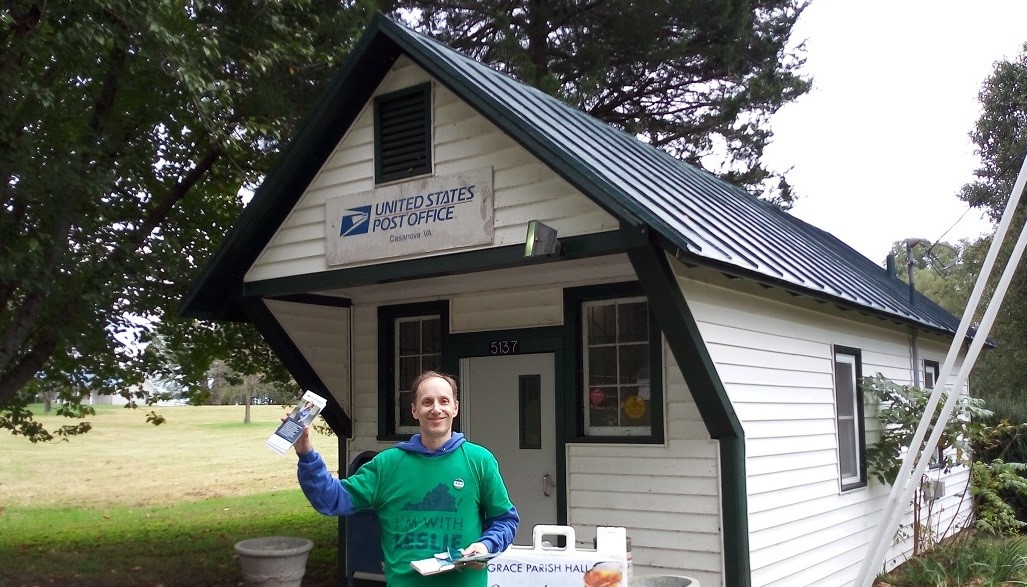 One woman, 85 years of age per the walking list data, volunteered to come to a phone bank for Cockburn if she could get a ride. I took her phone number. Next, a young woman, 25, was convinced that she was not registered. I assured her that all the people on my list were registered, and we concluded that she had gotten registered when she had changed her address at the DMV.

After a lunch break, I started the second package. Following many spread-out houses with a lot of walking in between, I came to low-end motel-looking apartments that appeared to be a city or county-run facility. The first woman who answered there had me come into her one-room apartment, as she had many cats and dogs she didn’t want to let out. She explained that all people living in this complex had mental disabilities; she was agoraphobic herself and therefore could not volunteer, but would definitely vote. The 3 other people listed as Democrats in the facility also promised to vote. As they did not seem to have cars, I asked them all if they had a driving license or other photo ID and fortunately they all said yes. 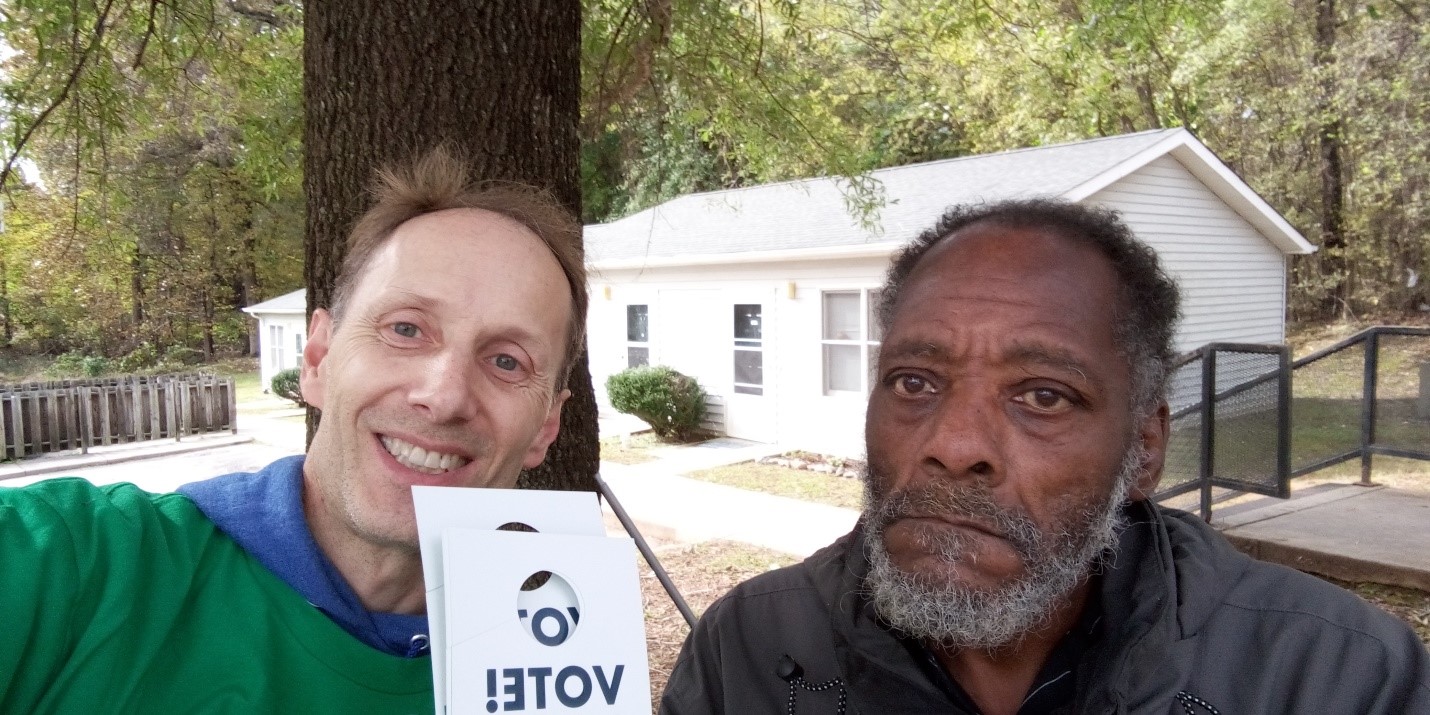 Next, there were another few blocks of small apartments at the edge of town, again mostly African-American women. In one of the first apartments, a woman said she was disabled and could not walk to the polls, and was trying to fill her absentee by mail ballot. The instructions said that a witness was needed, and she wasn’t sure whom to ask.  I offered to be her witness, but then we could not find where the witness was supposed to sign. The whole process is of mind-boggling complexity: there are three envelopes involved, 12 steps to follow, and many scary legal warnings.  We finally figured that the witness signature was needed at the bottom of envelope B. The woman said she was Republican in the past, but that she would vote for Leslie Cockburn and Tim Kaine this time. 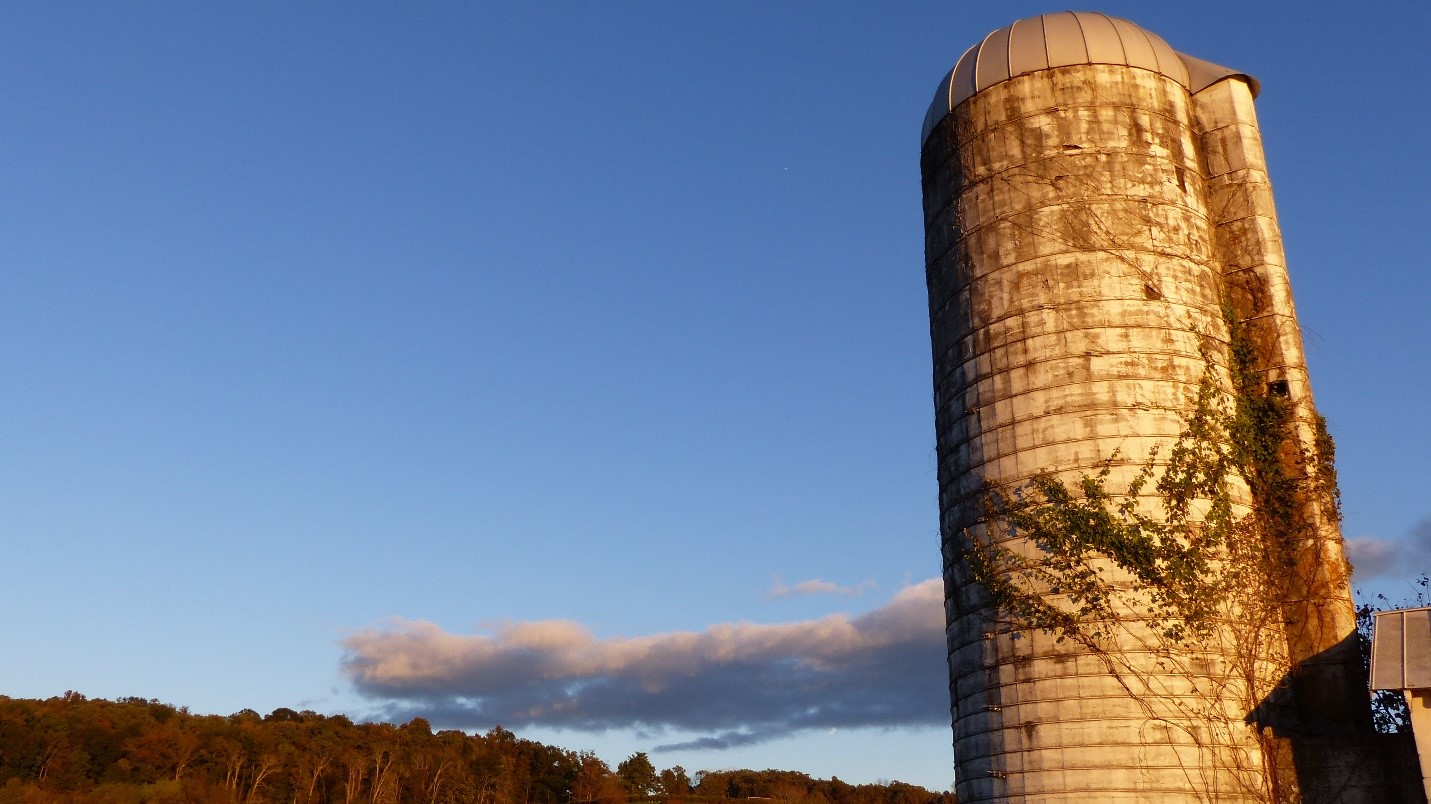 I moved on to the next few apartments. Another woman volunteered for the phone bank. Next, there was a man who wasn’t on my list but he said that he had just registered recently. He asked if Leslie Cockburn was running against Spanberger.  Farmville is only about 15 miles from the VA5/VA7 district line, and the road from Richmond to Farmville was lined with Spanberger and Brat signs.

It was already 4:30 and time to start my third package.  This one was in a neighborhood on the other side of town – only 1.5 miles away but it looked like a different world.  It appeared to be the wealthy part of Farmville and I learned that Cockburn just had an event at the town library the night before, and had been there the previous week as well.  It felt good to hear that this amazing candidate, by visiting these small towns, was leaving no stone unturned in her gigantic district. This last neighborhood had been canvassed before, so it went fairly fast, but I managed to find takers for the  last of the yard signs I had taken from the office, and planted those in the yards as visibly as I could next to the side of the busy road. 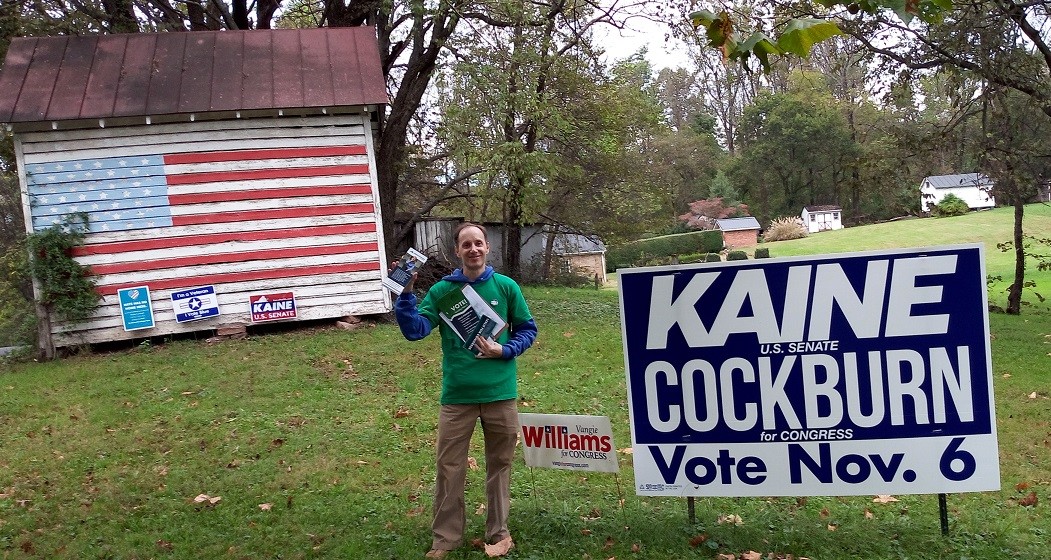 It was almost dark when I got back to the campaign office. This time, there were a half dozen volunteers there, the mood was upbeat, and Ben, one of the field leads, was ecstatic that most of the turfs had been covered, except for a few that would be done the next day, and they already had a few two-package volunteers lined up for that day.

They asked if I would be back, and possibly others, as I mentioned I had fellow volunteers in the grassroots group I am part of, called Virginia Democracy Forward. They explained that they would likely send us to the Charlottesville area, where so many of the district’s Democrats were concentrated.  They did have a critical lack of volunteers in Danville but that was almost next to the North Carolina border. They also had turned Warrenton, where there had been an influx of DC area volunteers, into a sort of clearinghouse from which people were sent further afield.

This morning when I had arrived, the town felt like a world apart. Now, with the dusk settling over the surrounding hills, and as I devoured a large piece of pumpkin bread home-cooked by one of the local volunteers, I was feeling more a part of the town. I kept thinking about the tagline that the Postcard for Virginia group had printed on tens of thousands of postcards that volunteers were mailing all around the state:  Virginia is my district. Yes, this is why I was here.

They all shook my hand and I wished them good luck.  Then I hopped in my car and headed back home. 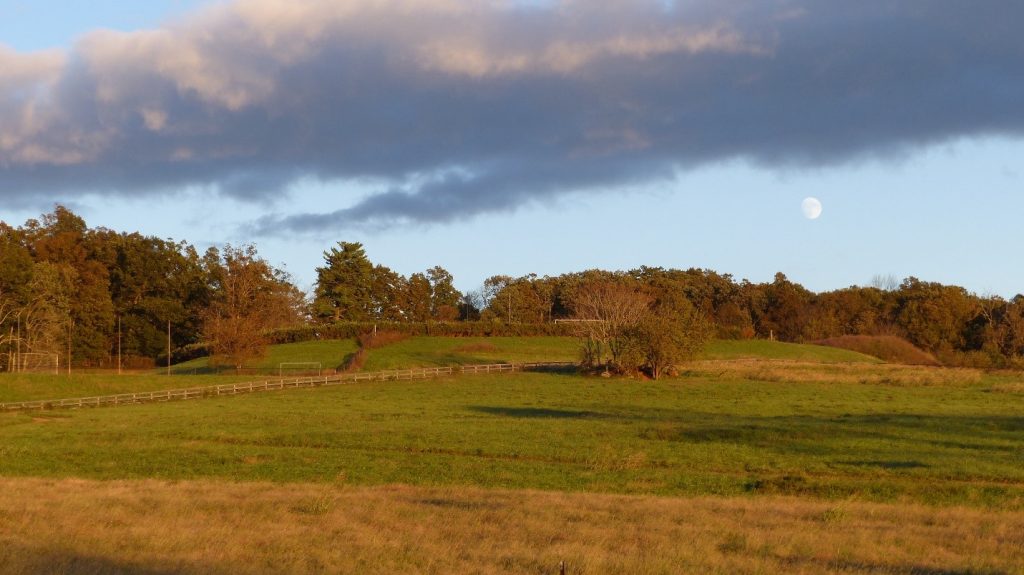 (Some photos from Warrenton surroundings)