Steve Bannon came to Culpeper yesterday, where he addressed a crowd of about 32 somber and low-spirited Dave Brat fans. Though Bannon tried to give people an exalted sense of themselves, speaking of them as warriors in a civil war within the Republican Party – and touting his creation, Dave Brat, as the first victory in that war  – he did not have much effect. (Listen for yourself.)  My guess: Republicans are as tired as we are of such divisive rhetoric, which is precisely the sort that Brat himself has been spouting at us for four long years. It was noteworthy, too, that Bannon did not mention Corey Stewart once.

One person at my table commented on the low turnout, even though, he said, there’d been robocalls the night before (a sign that the RSVP rate was low?), and there was general muttering about how Election Night would be a nailbiter.

By the way, my head count differs from that of the Richmond Times-Dispatch’s figure of 50 (which is what Bannon says it was) as I’m discounting a) the reporters; b) the event organizers; c) the Dave Brat staff members; and d) the 3 Democrats in attendance out of curiosity (including yours truly).

I’m in agreement with Bannon on one thing: #VA07 is vitally important and not just to those of us who live in it.  Bannon called it a bellwether for the whole country, since our polls close so early and one side or the other in the western states, with their many tight and important races, will be energized by the results.

And Bannon’s right about the importance of the GOTV effort!  Please help your candidates in any way you can. Canvassers, phonebankers, texters, and Election Day poll greeters are needed!  I’ll be out for the entirety of Election Day at a heavily Democratic precinct, making sure voters get to vote and that everyone knows to vote for Tim Kaine, Abigail Spanberger, and Danny Plaugher (the Democrat running for Henrico Board of Supervisors).  But you don’t need to do such a long shift!  Typical shifts are 2-3 hours.  Go to candidates’ websites and sign up for a canvassing or poll greeting shift!  (For Spanberger in #VA07 go HERE) When we #GOTV, we turn out the votes and when we vote, we win! 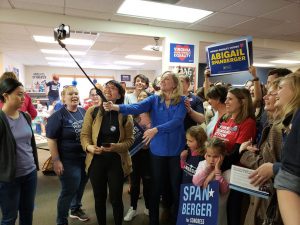