Good to see folks, including Nobel Prize winner and former VP Al Gore, TV/film actress Piper Perabo, and @HipHopCaucus Senior VP Mustafa Santiago Ali, weighing in against Dominion’s proposed fracked-gas compressor station in historically African-American Union Hill. The fate of this project will be decided at the next Virginia Air Pollution Control Board meeting on 12/19 (postponed from 12/10 due to the snowstorm in the Richmond area). Unfortunately, it appears that the proverbial “fix is in,” thanks to the Northam administration’s manipulations and machinations with the Board. Fortunately, there are a LOT of people, including the aforementioned, speaking out against this brain-dead, environmental and economically harmful project. Over the next eight days, I encourage everyone to speak up as well…on Twitter, Facebook, in calls to your elected Virginia representatives, etc. Among other things, you can say what Al Gore tweeted: “I support the Union Hill community in VA fighting this dirty fossil fuel infrastructure & I support Environmental Justice.” 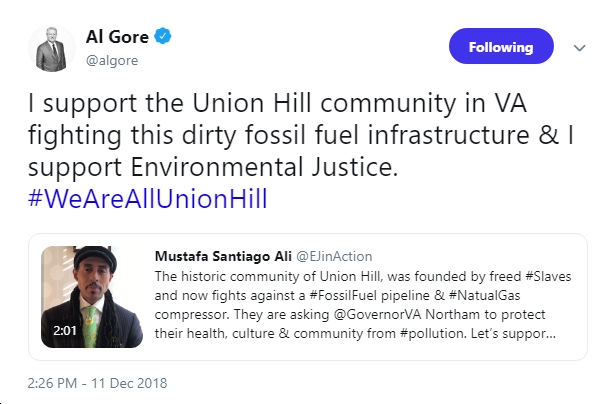 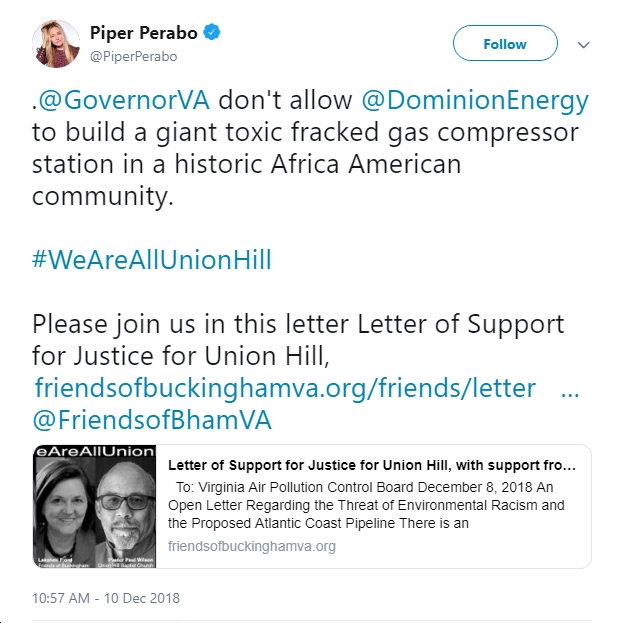 The historic community of Union Hill, was founded by freed #Slaves and now fights against a #FossilFuel pipeline & #NatualGas compressor. They are asking @GovernorVA Northam to protect their health, culture & community from #pollution. Let’s support them: https://t.co/U0ouS93ltB pic.twitter.com/ETl3suCj1j