And why exactly should Herring resign? Because, according to Gilbert, Herring supposedly said back in 2013 that he would resign as AG if he decided to run for governor. Of course, the context of this  – as the Washington Post reports – is this:

At the time, Republican Ken Cuccinelli faced criticism for not stepping down as attorney general while he was his party’s candidate for governor. Cuccinelli lost to Herring. [sic – this is a really bad mistake by the WaPo; in fact, Cuccinelli lost in 2013 to Terry McAuliffe!]

Herring’s spokesman pointed out that the Virginian-Pilot article ran just a month before the 2013 election. At that point, Cuccinelli had been “running full-time for several months” and not performing his duties as attorney general, Kelly said.

Comparing the two situations is “another typically partisan and predictable response from Delegate Gilbert,” Kelly said via email. Herring “still has a lot he’s working to get done for the people of Virginia, including passing the protections from hate crimes and white supremacist violence that Del. Gilbert’s caucus has blocked the last few years.”

I’d also note that in his 2009 run for governor, then-AG Bob McDonnell (R) resigned on February 20, 2009 as he geared up to run full time (note: McDonnell went on to defeat Democrat Creigh Deeds in November). Obviously, Mark Herring isn’t anywhere close to running full time, given that we’re still more than two years away from 2021. A few other examples of Republican Attorneys General and when they resigned when they ran for governor of Virginia include:

So…generally speaking, Republican AGs have resigned somewhere between February and June of the gubernatorial election years they were running in (NOT 2+ years in advance of those election years), with the exception of Ken Cuccinelli, who never resigned. In other words, as usual, Virginia Republicans are being completely hypocritical, applying standards to a Democrat that they have NEVER applied to their fellow Republicans – utterly shameless, as always. The answer? For starters, let’s boot these people out of power the next chance we get, which will be November 2019. Then, let’s make sure that Democrats sweep all three statewide offices yet AGAIN in 2021, hopefully leaving Republicans without a single lever of power in the Commonwealth — a fate they have richly earned. 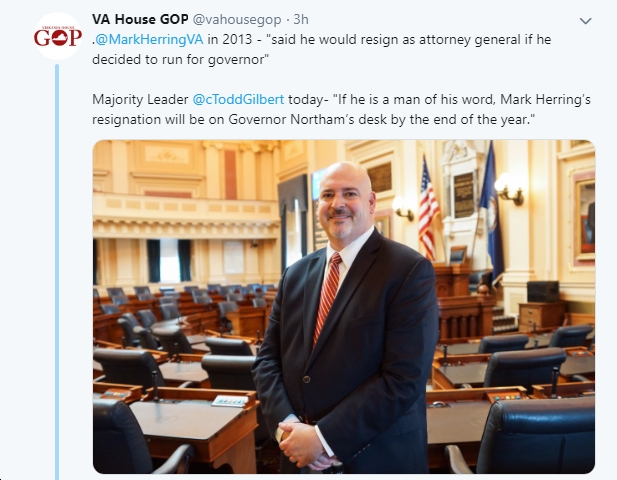