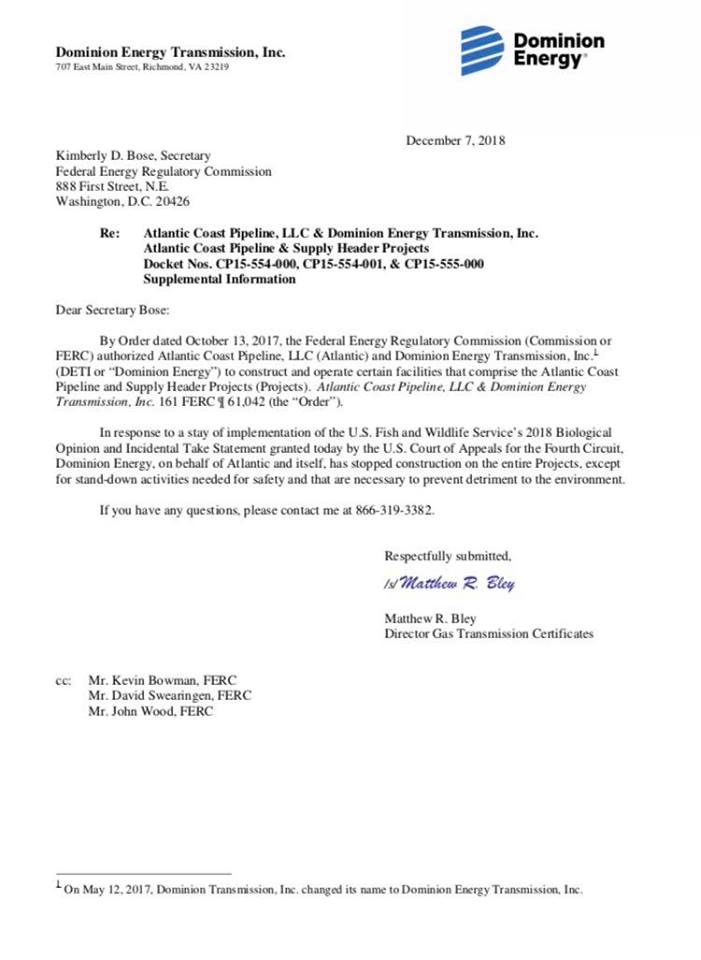 How’s this for a Friday night news dump:  Dominion Energy has suspended ALL WORK along the 600 mile route of the Atlantic Coast Pipeline.

This stunning development is in response to a ruling issued earlier today:

“In response to a stay of implementation of the U.S. Fish and Wildlife Services 2018 Biological Opinion and Incidental Take Statement granted today by the U.S. Court of Appeal for the Fourth Circuit, Dominion Energy…has stopped construction on the entire Project.”

In its decision hours earlier, the Fourth Circuit granted an emergency stay motion filed only days ago by the Sierra Club and other environmental groups against the Atlantic Coast Pipeline.  In its order, the Court issued an immediate stay of the Fish and Wildlife Service 2018 Biological Opinion and Incidental Take Statement, which apparently means that all construction must stop – along the entire 600 mile route through West Virginia, Virginia and North Carolina.

Whatever happens next, this work stoppage further delays and complicates Dominion Energy’s rush to get its massive $7 billion pipeline – to be paid for by unsuspecting ratepayers – approved and built before the opposition – and the courts are able to stop it.

The stunning work stoppage news caps off a huge news day in the pipeline battle in Virginia.  As readers of Blue Virginia know, the broad movement of committed social and environmental justice advocates that comprise the Virginia pipeline resistance has been winning battles on a weekly and sometimes daily basis. In the courts.  In the streets.  In the trees.  In the court of public opinion.

The day started with a story posted before 5 a.m. by a national press outlet – nbcnews.com.  This lengthy and very sympathetic article tells the story of the environmental racism at the heart of Dominion Energy’s push to build a massive compressor station for its Atlantic Coast Pipeline in the heart of Union Hill. Union Hill is an historic, predominantly African American community that Dominion is trying to erase, first by pretending it does not exist, and now by trying to convince the Virginia State Air Pollution Control Board that it that Union Hill lives don’t matter.  But as John and Ruby Laury, longtime residents of Union Hill told NBC News, “Dominion thought they can just come in and we’d all roll over….We have to stand up.  We have no fear of Dominion.”

As the morning wore on, people noted an otherwise unremarkable article in the Richmond Times Dispatch where Lieutenant Governor Justin Fairfax offered his thoughts on whether the NFL should allow Colin Kaepernick to play (spoiler alert – he does and we agree!).  Buried in that article are the first comments ever made publicly by Fairfax on the Union Hill compressor station and Governor Northam’s effort to rig the vote of the Air Pollution Control Board, which is scheduled to meet on December 10 to decide the fate of Union Hill:

Fairfax declined to say whether he supported Gov. Ralph Northam’s controversial recent decision to remove two members from the state air pollution board less than a week after they expressed concerns about a plan for a natural gas compressor station in Buckingham County. He said he had met with people from the area to hear their concerns and shared the concerns with the Northam administration.

“The governor made his decision,” Fairfax said.

Some have noted that as Lieutenant Governor, Fairfax has no control over what happens with Union Hill.  Perhaps.  But he certainly has no control over the NFL either. That did not prevent him from expressing his “grave concerns” about how the NFL has responded to the protests by Kaepernick and other players.  He has a voice.  And he should raise that voice for the good people of Union Hill.

Several hours later, news broke that Attorney General Mark Herring had filed suit against Mountain Valley Pipeline, citing more than 300 violations of Virginia environmental regulations.  Many pointed out that this lawsuit to collect “maximum civil penalties” is weak tea and a poor substitute for a stop work order, which is authorized by Virginia law.  And they are correct.  But it is some progress.

Meanwhile, the NAACP held a town hall last night on Union Hill, a protest in Richmond is scheduled for 4 pm on December 7, and the Air Board is meeting on December 10.  Or is it.

As the afternoon wore on, DEQ announced that the Air Board meeting has been delayed from 10 am on December 10, to 12 noon.  And it may not happen at all, depending on the weather.  Or so they say.

And then the Friday news dump of an immediate stop of all work on the Atlantic Coast Pipeline.

When all is said and done, all of these stories have one thing in common.  The pipeline resistance movement in Virginia is having a huge impact.  The courts are acting.  Our story has gone national.  Mark Herring has been forced to at least start some long overdue enforcement action. Justin Fairfax has been forced to go on record, however weakly, after months of relentless pressure.  And Dominion and DEQ are worried about what happens next.