Now, LaRock is back at his extremism, bigotry and ignorance, writing on his Facebook page about Peter Vlaming, a French teacher who was terminated from his job “due to his insubordination and repeated refusal to comply with directives made to him by multiple WPPS administrators,” specifically his repeated refusal, after being asked “over several weeks and by multiple administrators, to address a [transgender] student by the pronouns with which this student identifies.” Accordsing to LaRock, not only shouldn’t Vlaming have been fired, he’s a…wait for it…yeah, “a hero!” (see below) and compared transgender identity to anorexia. That set off a torrent of comments on LaRock’s Facebook page, some of the “best” of which I’ve included below. Enjoy…or maybe not. More to the point, let’s see if it’s possible, even in a “red” district, to oust this embarrassment to Virginia next November. 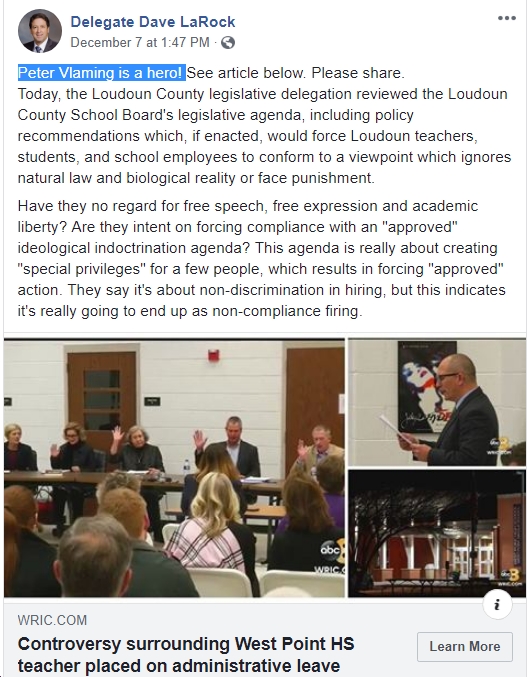 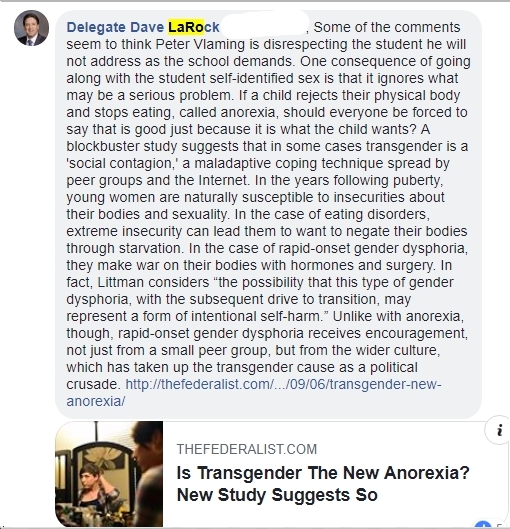 There’s a lot more – check it out if you have the stomach for it. Sadly, it’s typical for how the right wing thinks these days, how it discusses topics like sexual identity, and why it’s so important that we defeat Dave LaRock and everyone else (Amanda Chase, Dick Black, etc.) of his ilk.