Remember how in the spring of 2018, when the Republican primary campaign for U.S. Senate was raging, there were actually people who argued that nutty, far-right Paul-bot Del. Nick Freitas was somehow less extreme than neo-Confederate Corey Stewart. That’s despite the fact that Freitas:

a) bragged about the “Courageous Leadership Award” he received from the “Virginia Christian Alliance” for having “voted the right way and…stood up and spoke out for Christian causes”;

b) was a co-sponsor, along with our old friend “Sideshow Bob” Marshall and other anti-LGBT Republicans like Scott Lingamfelter, Mark Cole and Dave LaRock, of Virginia’s version of the so-called “bathroom bill,” which even the highly conservative Richmond Times-Dispatch editorial page called “even more extreme” than North Carolina’s infamous law;

c) delivered this bizarre, unhinged speech in the House of Delegates, in which he claimed that we “can’t have an honest debate” on the issue of guns because supposedly Democrats will never stop until all guns are taken away (e.g., “assault weapons,” which Freitas defines as “something that looks scary”). And Freitas was SUPER insulted about, supposedly, being compared to Nazis and “segregationists” (which he claimed was all about the “Democrat Party,” not HIS party)

d) said Social Security is like a “Ponzi scheme” and claimed that climate scientists “immediately go into a policy discussion” (FALSE!) and that the “private property rights” are the answer to global warming…

The latest example of Freitas’ extremism came right before Christmas, in a Facebook post that now has 256 shares, 114 comments and around 2,200 “likes” and “loves” from Freitas’ fans. [UPDATE: Freitas also posted on Twitter, where it has over 1,000 retweets and nearly 4,000 “likes” so far] Here’s Freitas’ initial post, in which he asks, “if you are a leftist leaving your tax and regulation heavy state for one that doesn’t punish you or your business as much…can you please leave your politics back in the state you are fleeing.” 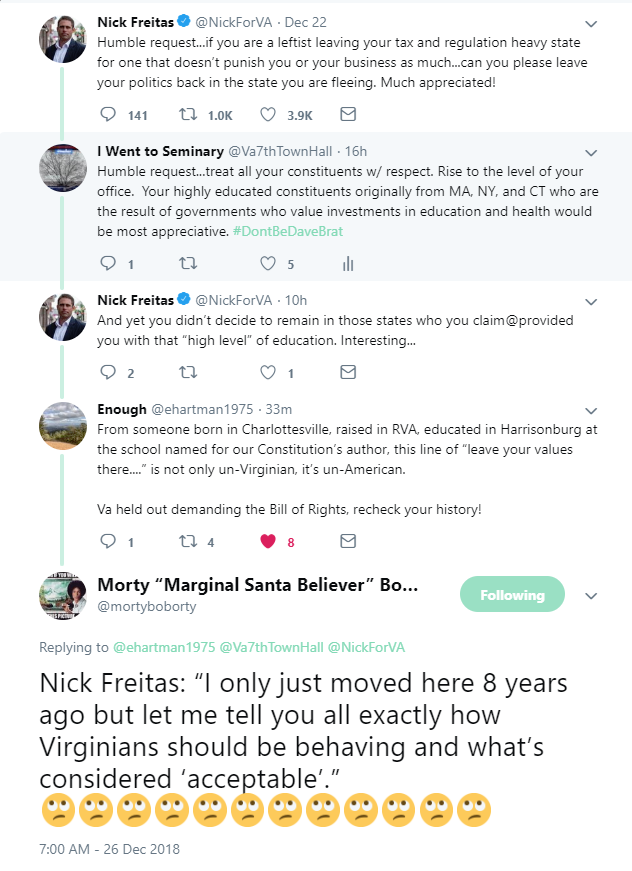 Next, check out the responses, starting with the one from “I Went to Seminary,” who correctly notes that Freitas’ “highly educated constituents originally from MA, NY and CT…are the result of governments who value investments in education and health.” Freitas’ response to that comment – “and yet you didn’t decide to remain in those states who you claim provided you with that ‘high level’ of education’ – is typically ignorant and nonsensical. In fact, many of us moved to the DC/MD/VA area from places like New England to work for the federal government (in my case, also for graduate school at GW University). But anyways…

With that, check out some of the highest-rated comments by Freitas’ supporters, which typify the scorn, contempt, etc. by the hard right against “blue” parts of the state and the country. Bolding added by me for emphasis of particularly fun and/or crazy parts. Enjoy (?).

Note that I can’t find any evidence for the 70% figure, but I can easily find evidence that “blue” states out-perform “red” states on many metrics, including the “American Human Development Index,” which finds:

Also, if you look at this ranking of states by median household income, out of the top 16 states (including the District of Columbia), a whopping 14 went for Hillary Clinton, while just two (Alaska and Utah) went for Trump in 2016. As for the poorest 14 states, they are all “red” except for New Mexico. And this is in SPITE of massive transfers from the federal government to the “red” states (as this AP fact check found, “traditionally Democratic states (blue), subsidize low-tax, traditionally Republican states (red) — in a big way”). So yeah, the 70% statistic is almost certainly not accurate, but the comment definitely gets at something – “blue” states are generally the most prosperous economically, and also have the best education and health statistics too.

With that, here’s Nick Freitas’ bats***-crazy response to the comment (by someone named “Gregor”) about blue states making up 70% of the US economy: “Respectfully Gregor, using that logic I could conclude that locusts are good for crops since you always find locusts where the crops are.” Wait, what? Freitas is saying that people from “blue” states are like destructive insects eating the “crops” of “red” states? Charming, eh? And also completely false; as noted above, the “blue” states actually SUBSIDIZE the “red” states. Big time. Not that true believers like Nick Freitas will ever acknowledge that fact.

P.S. Here in Virginia, a place that Freitas probably thinks of as commie or whatever – Arlington – actually has among the lowest property tax rates in the region, and has been ranked the best place to live in America due to its “solid public-school system, a healthy population, ample nightlife venues and accessible public transit.” Horrible, huh? LOL

And yet again, they're baaaaaack. Can't wait, huh? https://bluevirginia.us/2021/10/wednesday-news-case-closed-99-9-of-scientists-agree-climate-emergency-caused-by-humans-democrats-scaling-back-budget-bill-press-for-compromise-by-weeks-end-1-6#comment-5577640088