Very interesting article (in his monthly newsletter) by Del. David Toscano, until recently the Democratic Leader in the Virginia House of Delegates. I hope that all of Del. Toscano’s colleagues, including new leader Del. Eileen Filler-Corn, will read this and take it to heart.

Forgive the imagery (and the irony), but the Atlantic Coast Pipeline (ACP) is increasingly looking like an old automobile in need of a valve job – it is leaking serious oil, suffers by comparison to newer, more advanced models, and even if it can be made roadworthy, you and I will pay the bill for decades.

Several years ago, when this massive pipeline was proposed, I was skeptical but willing to listen. I recognized that our state legislature had no vote on the pipeline, but I nonetheless brought my serious concerns to the attention of Dominion, state agencies, and my constituents. I worked with Nelson County homeowners in and around Wintergreen to ask Dominion to move the pipeline route, but we were rebuffed. We suggested many possible alternative routes, each of which would limit the environmental impact, but all of these were rejected. I formally asked that the state Department of Environmental Quality (DEQ) adopt more stringent review of stream crossings, an approach that was only marginally accepted. I advanced a set of criteria that would allow the pipeline to gain my support, most of which have not been met. The proposed siting of the gas compression station at Union Hill is increasingly problematic. And my initial concern about the cost of the pipeline, much of which will be borne by the ratepayers, has only intensified.

THAT WAS THEN, THIS IS NOW
In short, what I heard when this was first presented about future energy needs requiring the building of this massive new pipeline has been undercut by developments over and over again. Consider the following:

First, in recent testimony before the State Corporation Commission (SCC), critics utilized Dominion Energy’s own data to show that the ACP could increase ratepayer bills as much as $2.3 billion over the life of the project (View article here). This is largely due to the fact that a hefty return on investment for shareholders is authorized on capital projects by law.

Second, legal challenges continue. In May, the U.S. Court of Appeals for the 4th Circuit ruled that U.S. Fish and Wildlife Service permits designed to protect endangered species were improperly issued, and while the Service has now issued new permits, that decision has also been challenged and the court has issued a stay, essentially preventing any construction in affected areas. In December, the same court blocked the ACP’s proposed crossing of two national forests and the Appalachian Trail near Wintergreen. The Federal Energy Regulation Commission (FERC), the main decision maker on the pipeline, is being pressed to revoke the project’s certificate to move forward, and a similar permit it issued previously to build the Mountain Valley Pipeline (MVP) has been vacated by the courts. Because of water quality violations, the DEQ has sued the MVP and Virginia’s State Water Control Board is considering revocation of a key permit; meanwhile, the State Air Board has delayed action on the controversial Buckingham County compressor station deemed essential for the ACP.

Third, the energy landscape has changed dramatically in the last few years. Renewables are increasingly competitive with fossil fuel generation. The cost of solar energy has fallen dramatically in the last decade; a recent report by the consultancy Lazard suggests that solar costs are undercutting natural gas in some markets, and more price competition is on the way. Governor Northam recently released a study showing how Virginia can help drive development of Atlantic Coast offshore wind energy projects, in other states as well as our own (you can read the release here). Energy storage is undergoing a technological revolution, and its costs are rapidly approaching those of “gas peaker” plants, which are largely kept in reserve and typically fired up when there is a spike in electricity demand (you can see an article about this here). Let’s hope that Virginia can take advantage of these opportunities; I sponsored a study last year on energy storage that can help provide a roadmap (see a press release about this here).

ENERGY USAGE TRENDS — IS THE PIPELINE STILL NEEDED?
As costs of renewables have declined, electricity usage remains relatively flat, thereby raising questions about the need for larger pipelines. Though not related exclusively to the pipeline, the SCC recently directed Dominion to refile its Integrated Resources Plan (IRP), largely because the company’s projections of “peak load and sales forecasts” were unjustified by the data, and “have been consistently overstated.” (You can read the SCC filing here). One of the major justifications for the pipeline has always been a projected increase in electricity use and the gas needed to generate it, and the SCC’s recent analysis has poked additional holes in that rationale. A recent study by our regional transmission coordinating company PJM, exploring the implications of a larger “interconnected load” across the middle Atlantic region, stated that “even in a scenario such as extreme winter load combined with a pipeline disruption at a critical location on the pipeline system from which a significant number of generators are served, PJM’s [electricity] system would still be reliable.”(See PJM’s Fuel Security Analysis documents here). And finally, we now know that Dominion’s existing long term pipeline contracts, mostly with the Transcontinental Gas Pipeline (Transco), can deliver enough gas to existing power plants and even those that may be built in the future. Perhaps more significantly, the gas transportation capacity added in recent years by expansions to five major pipelines serving our region of the country – Transco, Columbia, Leidy Southeast, Atlantic Sunrise, and Southeastern Trail – is actually greater than the capacity projected to be added by the MVP and ACP combined, further generating questions about the need for either new pipeline. 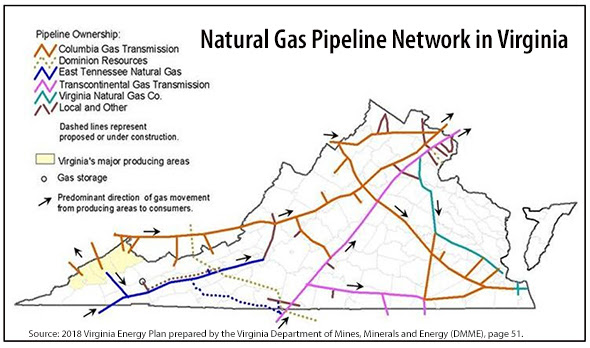 THE FUTURE ENERGY INFRASTRUCTURE
Make no mistake about it – there is a need to replace our aging and increasingly decrepit thermal generation fleet (coal, gas, and nuclear power plants), and natural gas remains cheaper and certainly less toxic than coal. Beyond that, a real transition away from fossil fuels will also mean a major effort to “electrify almost everything,” especially in the transportation sector; that will not be easy and will require not only more electric generation but modernization of the grid.

Being bullish on renewables should not blind us to the requirement that as we advocate for the future, we will need to maintain some of our energy assets in the immediate term – including natural gas as part of that mix – and work with utilities to modernize our grid so that solar and wind electrons can be efficiently transported as they are generated. Failure to do so could create unacceptable disruptions; what we do not need are either major rate spikes, or, worse yet, interruptions in service due to lack of the infrastructure necessary to deliver energy to consumers. In other words, we will need pipelines and transmission lines for some time to come, even if we do not need a pipeline like the ACP.

A future where we can generate substantial electricity through renewables and – most importantly – be able to store it so it can be dispatched “when the wind don’t blow and the sun don’t shine” is coming into clearer view. Recent technological advancements and market disruptions raise questions about the need for a gigantic pipeline that will cost ratepayers for decades and may, as the renewables economy is further developed, become simply what economists call a “stranded asset,” which remains costly but is not used effectively for its intended purpose.

As we transition to a carbon-free future, the Commonwealth obviously wants to avoid unacceptable disruptions or major rate spikes. Consequently, there may be a need for some small gas interconnectors (particularly in the Tidewater region) to overcome regional pipeline congestion, and likely some hard choices about pipelines and transmission lines will remain for some time. But those choices do not mean we need to embrace a pipeline as massive as the Atlantic Coast Pipeline. This behemoth is “leaking oil” and, like that old car, is no longer worth the investment needed to keep it going.

Challenger @RodHallforVA has gotten a bunch of endorsements recently, but this is a big one for incumbent Del. @guzman4virginia...from VA Speaker @EFillerCorn https://bluevirginia.us/2021/04/wednesday-news-biden-plans-to-cut-emissions-at-least-in-half-by-2030-will-the-derek-chauvin-guilty-verdict-change-policing-in-america-george-w-bush-shows-how-far-the-gop-has-fallen#comment-5353263499

If true...16k delegates so far for Youngkin, more than that for Snyder. How about for Cox and Chase? The VA GOP(Q) convention is set for 5/8...just 17 days from now. https://bluevirginia.us/2021/04/wednesday-news-biden-plans-to-cut-emissions-at-least-in-half-by-2030-will-the-derek-chauvin-guilty-verdict-change-policing-in-america-george-w-bush-shows-how-far-the-gop-has-fallen#comment-5353251462 h/t @BPaves