On September 20th, 2018, the Virginia Department of Corrections issued this memo informing visitors at the Nottoway Correctional Center that they will no longer be permitted to wear tampons or menstrual supplies when visiting inmates, effective October 6th, 2019. The Warden, David W. Call, explains that the policy stems from concerns that the menstrual supplies could be “an ideal way to conceal contraband.”

This memo quickly went viral and received state and national attention for its absurdity by activists and legislators alike. After mounds of pressure, the policy was swiftly rescinded by Secretary of Public Safety and Homeland Security Brian Moran. Activists celebrated this rare “win” for women and Moran became our champion. 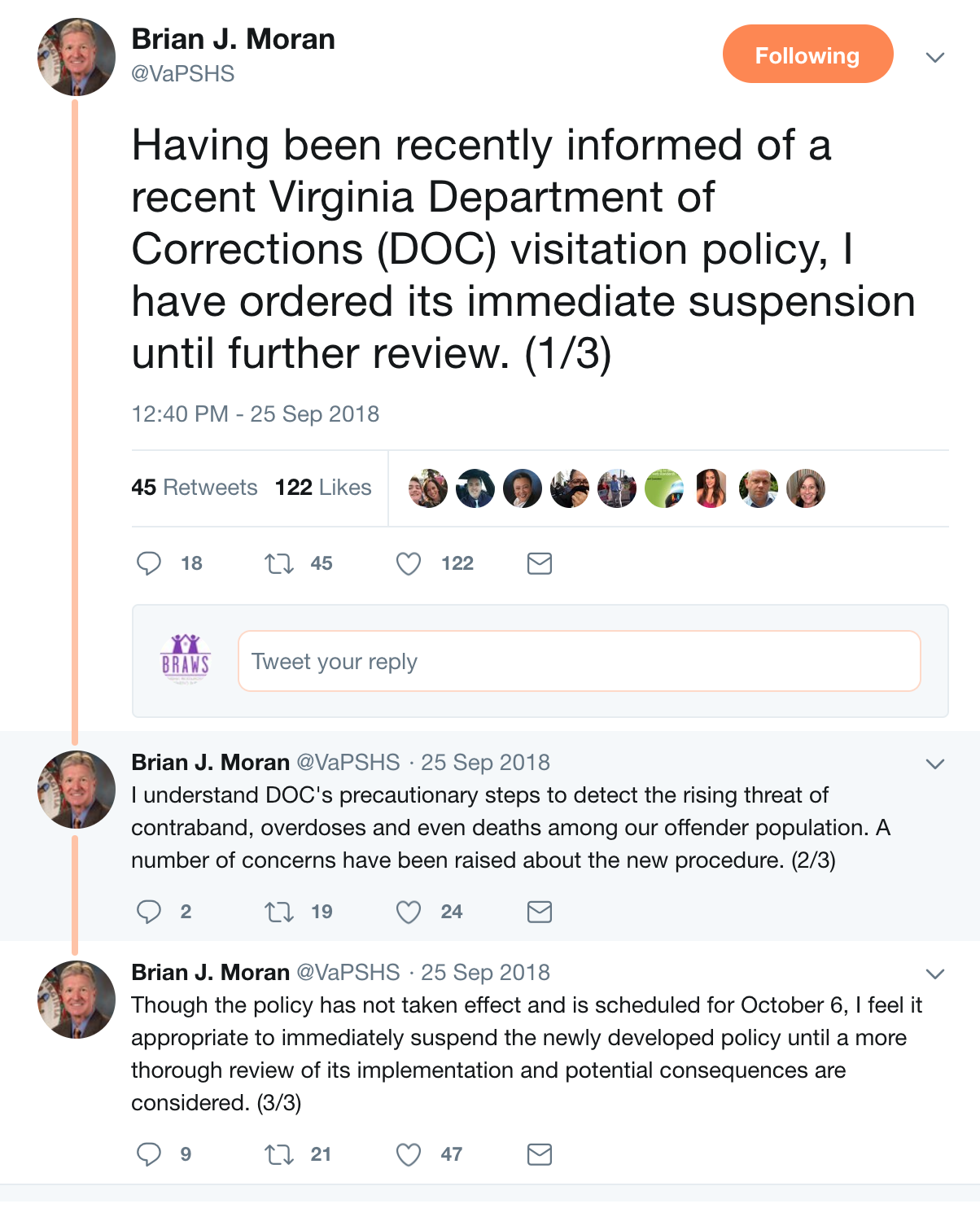 A few days later I received a call from a local woman. She was confused by the memo, and the consequential repeal, because she had already been banned from visiting Nottoway Correctional Center last summer for wearing a tampon – months before this new policy had even been publicized.

This is what she told me about her experience in July 2018:

“I drove 2hrs to Nottoway Correctional Center to visit a loved one.  I was then instructed to step on a machine to scan my body. Next I was directed into a room where a female correction officer closed the door behind me. She looked at me and asked if I was on my cycle. I replied yes. She then informed me she had to take me in another room with another female officer and herself. They said they would give me a state issued tampon and had to watch me remove the old one. All this had to be done before I could visit my loved one. Confused I quickly asked her to repeat herself and she did. I then repeated what she said for clarification. She asked me if I needed her to say it again. I said no let me out of here. She asked me if I wanted to speak with someone. I said no let me out of here. After attempting to open the door myself with no success, I asked her again to let me out. She finally opened the door and I left but immediately came back for a explanation of my treatment and to speak with a supervisor. Visibly upset I was escorted into a room where I waited for an explanation. I was told this is what they have to do and it’s approved by the state. Completely distraught, embarrassed, and feeling violated I left. I was initially afraid they would not let me leave. I fear going back to visit my loved one. I’m also concerned about the women who were not brave enough to say NO.”

It turns out that the viral memo in September, “heroically” repealed by Secretary Moran, was, in fact, not a new policy, but one with an intent to codify an already existing, shameful practice into official procedure. Moran’s withdrawal of the policy implementation did nothing to curtail the perpetual mistreatment of visiting women wearing tampon and menstrual cups. In fact, until Secretary Moran specifically prohibits this practice at all prisons under his supervision, then menstruating visitors will continued to be offered the inhumane choice of a strip search or leaving the prison without visiting with an inmate (oftentimes after driving hours to be there).

It seems unlikely that Moran will prohibit this practice freely. Department of Corrections officials, who adamantly and unapologetically justify their behavior, argue that contraband could be smuggled through women’s vaginas. “Offenders in Virginia have died of drug overdoses while inside our prisons. It’s our job to keep the offenders and staff as safe as we can,” explains prison spokesperson, Lisa Kinney.

It makes one wonder. How many drugs per year enter Virginia prisons through women’s vaginas? Given that visitors are screened before they visit, and inmates have full body cavity searches afterward, it is hard to believe that we have a widespread vagina drug smuggling epidemic in Virginia. Until then, an invasive procedure should be the LAST option, not the first. I suspect that contraband is penetrating the prisons walls predominantly by those NOT being searched – like prison employees and vendors entering the facility. Why are they not also subjected to the same body cavity searches as visiting women and girls?

In my opinion, money and resources would be better invested in drug sniffing dogs, like the ones they have at airports. That would go a lot further in stemming the tide of drugs coming into prisons and would evenly and equitably distribute the “search” to everyone entering every prison facility without regard to gender or reason for being there.

As a side note, if the drug problem is so vast, why aren’t we providing more resources towards rehabilitation? Seems to me this would be a more civil option, and certainly contribute to lowering our recidivism rate, than searching the vagina of a shy teenage girl who desperately longs to spend an hour with her father.

I am proud of my representative, Delegate Mark Keam, for introducing legislation this session, HB 1884, addressing this issue. The bill is now on the House floor, awaiting final vote to go on to the Senate. If passed, Virginia Department of Corrections will be required to adopt a standard policy and protocol concerning menstruating visitors and publicize the decision to the public. Ideally, I would like to see this practice banned altogether, but until then, the Department of Corrections needs to be transparent and held accountable for their actions.

In Stark Contrast to Her Ignorant, Extreme Republican Opponent, Rep. Abigail Spanberger (D-VA07)’s Well-Informed, Well-Reasoned Voice Is One We BADLY Need in Congress!