New Legislation Would Repeal ‘Dominion Tax’ and Return Millions to Virginia Ratepayers
REFUND Act, Introduced by Rasoul and Petersen, Would Deliver the Largest Ratepayer Refund in Virginia History While Cracking Down on Ways Utilities Have Rigged the System In Their Favor
Today, a group of legislators unveiled a new bill in the Virginia General Assembly to repeal the “Dominion Tax” — the $250 more each year that most Virginians are spending on energy bills than they should — and return hundreds of millions of dollars to Virginia ratepayers. The legislation (HB 2645), known as the REFUND Act (the “Ratepayers Earned these Funds, Not Dominion” Act), will be carried by Del. Sam Rasoul in the House and Sen. Chap Petersen in the Senate. Twelve Senators and Delegates have already signed on to co-patron the bill, including House chief co-sponsor Delegate Alfonso Lopez.
The legislation would:
● Require refunds be paid to ratepayers for non-essential spending by for-profit utilities including lobbying, excessive executive compensation, political contributions, and advertising costs;
● End the “rate freeze” that allowed for hundreds of millions of dollars in overcharges each year and return to a transparent, consistent regulatory scheme to reduce energy bills;
● Place a real cap on overcharges and excess profits; and,
● Prevent ratepayers from picking up the costs of large natural gas pipelines-specifically the Atlantic Coast Pipeline-unrelated to providing energy to Virginian ratepayers.
“For too long, large utilities have taken Virginia ratepayers for a ride, and it’s time we return power to the people,” said Del. Sam Rasoul. “This would be the largest ratepayer refund in Virginia history, eliminating what is essentially a massive tax on Virginia’s working poor. It’s time for the House to deliver this much-needed financial relief to Virginia ratepayers.”
“We need to undo the rate freeze. This has allowed utility companies to gain excess profits. It is unfair to shift the cost burden onto Virginia consumers,” said Sen. Chap Petersen. “This law will establish new checks on these companies to prevent overcharging ratepayers.”
“Through decades of political influence, Dominion Energy has effectively undermined the protections that were put in place to ensure our monopoly utilities do not take advantage of their captive consumer base. As a result, Virginians have lost hundreds of millions of dollars, and the Commonwealth has fallen far behind the rest of the country on the bills we pay and the transition to an advanced energy economy. This landmark legislation is a first step in restoring balance to our utility framework, prioritizing the public interest and is long overdue,” said Clean Virginia Executive Director Brennan Gilmore.
“Many predatory loan customers who call our help hotline use the loans to pay recurring expenses, such as utilities and rent. Our work on utilities came out of our desire to lower costs for low-income consumers. This bill is an effort to reset the policy approach to utility regulation, keeping the practical focus on the utility customers’ costs and benefit,” said Dana Wiggins of the Virginia Poverty Law Center (VPLC).
The legislation returns regular State Corporation Commission (SCC) oversight in setting electricity rates to its normal status starting in 2020 and requires utilities to provide their audited financials to regulators every year regardless of whether there is a rate case or not. The bill also abolishes “peer group analysis” that unnecessarily ties Virginia’s rates to high-price neighbor states . This practice inflates energy bills and has no relation to the cost of providing energy to Virginians. Additionally, the legislation directs the SCC to begin developing new “performance-based” rate-setting mechanisms that reward efficiency and outcomes in the public interest.
There's no paywall on Blue Virginia, and we definitely want to keep it that way! If you want to help support our work, you can donate here - thanks! Also, you can sign up for our weekly email list here. 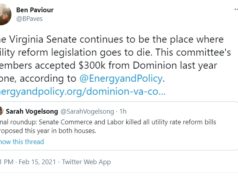