All politics is local. If we ever needed more proof of the old maxim, the debate that has played out in so many local governments on the Equal Rights Amendment (ERA) has provided it.

In particular, Newport News offered all the proof necessary when the city council voted against a resolution supporting ratification on a 4-3 vote last month (December 11). In an overwhelmingly Democratic city, the vote on a resolution for an amendment guaranteeing women legal equality was split along gender lines after the four councilwomen, led by Vice Mayor Tina Vick, voted no, while the three councilmen, led by resolution sponsor Councilmember David Jenkins, voted yes.

Jenkins’ resolution had been discussed during the city council’s work session two weeks before. The day before the December 11 meeting, however, the City Manager chose to pull the resolution from the council’s agenda due to “a lack of support among council.” During the work session hours before the meeting, Jenkins announced his intention to introduce the resolution in the “New Business” section of the agenda, during which any councilmember may introduce a resolution. Several councilmembers preferred to wait until the next City Council work session to discuss the ERA resolution further, voting on it only after the General Assembly had convened, and the council decided to wait.

Many passionate ERA supporters, including the local Democratic chair and sisters of Delta Sigma Theta sorority, were angered by the council’s decision to postpone a resolution to the General Assembly until after the Assembly session had started. After four of those advocates each spoke out against postponement during public comments, Jenkins chose to introduce the resolution, explaining, “I believe in my fellow councilmembers. I believe that they believe in equality as I do.”

Vice Mayor Vick was the first to oppose it, observing that Newport News is “guided by a woman city manager; I am a woman and the vice mayor; we have three other councilwomen.” She instead recommended more study of the ERA, stating that she felt the need to “be educated about what’s in the resolution.” The remaining three councilwomen refused to support a resolution that they did not expect to be voted on that night, while the two remaining councilmen voted yes.

After receiving widespread public backlash from the decision, Vick adopted a hostile attitude toward advocates of equality. In a response to an ERA supporter’s phone call, Vick ranted that the Democratic Party had “mental problems.” She also took to Twitter to “defend” herself—by mocking ERA supporters for the measure’s failure in the General Assembly a year ago. 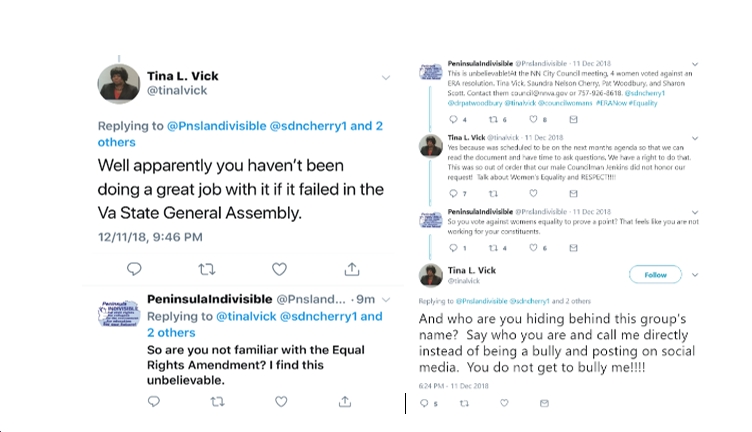 The strategy of delaying votes and redirecting emphasis to the timing of an issue and the persons raising it has a long history of use by small groups to obstruct the political will of the majority and to derail the expansion of civil rights. The ERA has been under consideration since 1921 and ratified by 37 states. It has gained the support of 81% of Virginians. It is an idea whose time arrived long ago. We need no further study of the 55-word amendment to know that women make 77 cents for every dollar a man makes, or that 84% of constitutions around the world include a ban on sex-based discrimination. Justice delayed is justice denied.

The passage of resolutions in support of the ERA by Virginia localities demonstrates to General Assembly members that their constituents care passionately about equal rights. It is a statement of principle, a principle that should not be controversial. When a city that chose Hillary Clinton over Donald Trump by 26 percentage points opposes the ERA, there is a fundamental mismatch between the local government and the city. Vice Mayor Vick presents herself as a proud Democrat from downtown Newport News, which is the most progressive part of that progressive city. She has no reason to ever fear a conservative challenger, and yet she still opposed the resolution.

This problem goes beyond one city and one councilmember. When local politicians can pretend to be Democrats, without any scrutiny, a city that believes in social justice does not get the government it deserves. Progressives who have routinely voted to re-elect local government officials without scrutiny should take a step back and realize the consequences of surrendering local government to conservatives. One more progressive on the Newport News City Council would have meant passage of the resolution. Half a century ago, we asked that Virginia voters be Democrats from the courthouse to the White House. It is time we added city council chambers to that vow.

To see the full footage of the City Council meeting, click here and view the “Jenkins” section.

NEW TV AD: “The Thought of Yesli Vega in Congress is Terrifying”