I was chatting with a Richmond-based political source of mine yesterday about the following bill by Israel O’Quinn (co-patroned by Daniel Marshall and John Bell in the House of Delegates; patroned by Charles Carrico, Sr. in the Senate) on casino gambling (HB 2536 – see screenshot, below), as well as lobbyists retained and large political contributions by coal barons (including the “United Company,” owned by one of the coal barons, Jim McGlothlin) who want to move into the gambling industry (also see screenshots, below). My source told me that in the O’Quinn bill, the localities are defined – without being named – in a way that clearly corresponds to Bristol, Portsmouth and Danville.  Also, my source tells me that the rumor mill is that right after session ends, the House GOP will report a $300k donation from the coal barons/gambling interests. Meanwhile, the House GOP might pass the O’Quinn bill this session.  Does that sound like the slimy system of legalized corruption known as the “Virginia Way” or WHAT???

See below the screenshots for more background and discussion on this issue. Also see Casino resort at former Bristol Mall could transform region’s economy, which reported back in September that “Jim McGlothlin and Clyde Stacy — former high school classmates, coal barons and longtime Southwest Virginia business leaders — are behind the proposal to create a 100,000-square-foot casino in part of the vacant 540,000-square-foot retail center on Gate City Highway. McGlothlin and Stacy envision establishing a massive resort with a hotel, restaurants, shopping, entertainment and family attractions on the 49-acre site. All they need is for the Virginia General Assembly to legalize gaming in the commonwealth.” And see Jeff Schapiro’s latest column (if you can read it, as it’s behind a strict paywall), which among other things notes:

Backers of a proposed casino in benighted Bristol, among them men and women who made a fortune in Southwest Virginia coal long before it hit bottom, have stroked checks for $550,000 to six PACs.

Northam’s committee recently received $25,000, an amount that could be verboten under the aforementioned Democrat-proposed restrictions. But it’s a mere bagatelle compared with what Kirk Cox landed.

The Republican House Speaker’s PAC got $200,000. It was the backers’ largest donation. Cox is no fan of gambling but has yet to say or do anything that could sink legislation to launch a Bristol casino. And the venture’s supporters are probably just fine with that.

With that, here are the screenshots, followed by a few more thoughts on all this… 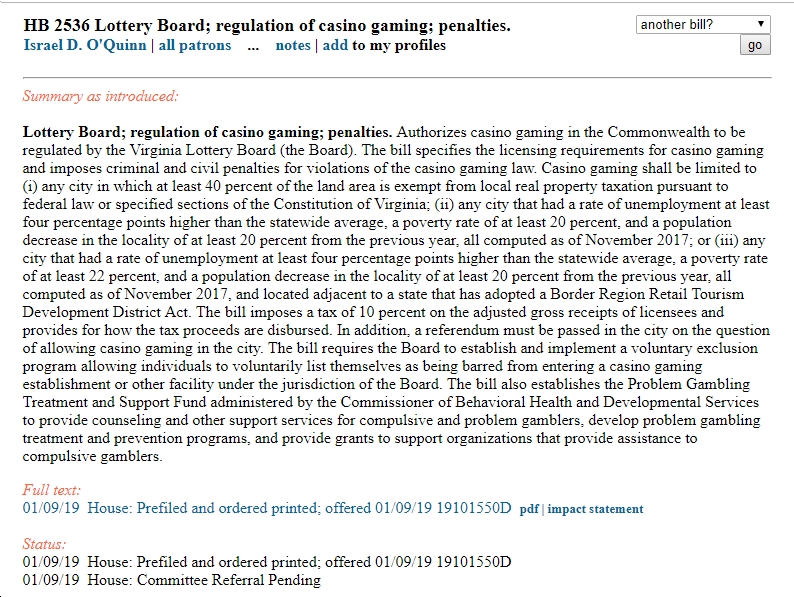 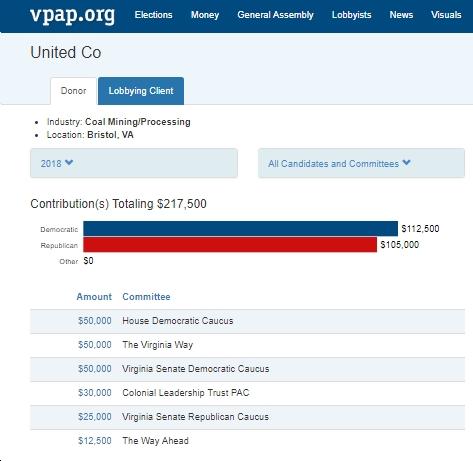 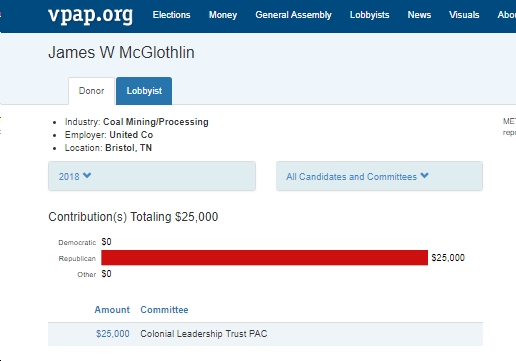 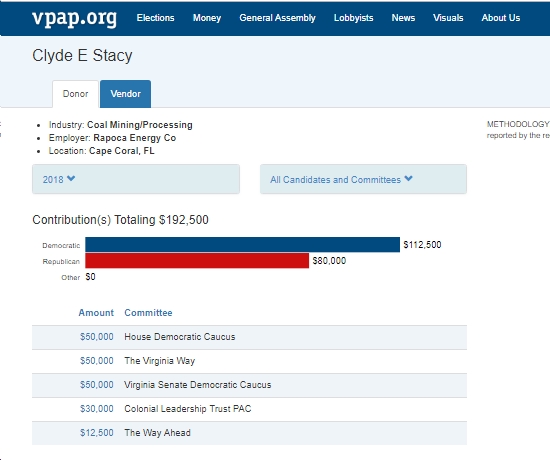 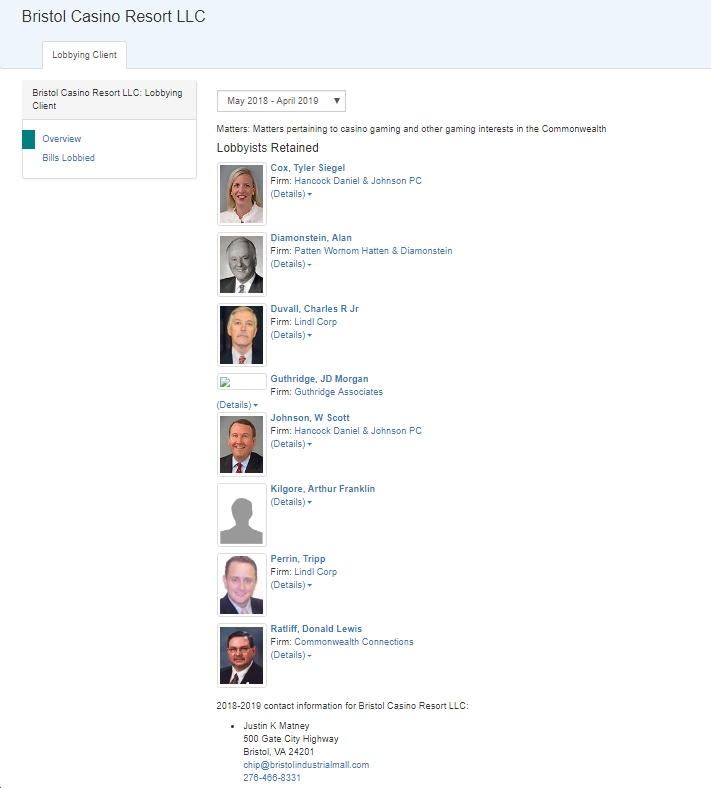 First off, you’ve gotta love Del. O’Quinn’s bill, which “[a]uthorizes casino gaming in the Commonwealth to be regulated by the Virginia Lottery Board,” and then proceeds to specify – without naming the cities, but describing them in such detail that it almost certainly narrows them down to Portsmouth (i – according to this article, “Half of its land mass belongs to federal, state or local government, churches, colleges and the like”), Danville (ii – according to this source, has a poverty rate of 22.5%) and Danville (iii – according to this source, is next door to a state – Tennessee – with a “Border Region Retail Tourism Development District Act”). I don’t understand, by the way, how any of these localities had “a population decrease in the locality of at least 20 percent from the previous year,” as none of them appear even close to such a draconian population decline. Weird.

So why these three cities? That’s murky, but see this 12/29/18 Bristol Herald Courier article, which reports that “Bristol, Danville and Portsmouth have become economically distressed in recent years due to a number of factors, including the loss of industry and population” and that “Bristol Resort and Casino representatives said Bristol, Danville and Portsmouth are all in need of economic development opportunities, and the legislation could provide those opportunities.” Something tells me there’s more to the story than that, I’m just not sure what exactly.

More broadly, does casino gambling make sense economically, for these communities or any others? I’m not sure there’s a definitive answer, but check out this 2014 article in The Atlantic, which argued that the “casino market is nearing saturation, if it is not already saturated”; that revenues to localities/states “are expected to decline even more rapidly in future as competitors proliferate”; that “[n]o one should look to casinos to revive cities, ‘because that’s not what casinos do'”; and that (bolding added by me for emphasis):

The impact of casinos on neighboring property values is “unambiguously negative,” according to the economists at the National Association of Realtors. Casinos don’t encourage non-gaming businesses to open nearby, because the people who most often visit casinos do not wander out to visit other shops and businesses. A casino is not like a movie theater or a sports stadium, offering a time-limited amusement. It is designed to be an all-absorbing environment that does not release its customers until they have exhausted their money.

The Institute for American Values has gathered the best evidence on the social consequences of casinos. That evidence should worry any responsible city government.

In sum, the article finds, “towns and cities that turned to gambling to escape their problems may discover that they have accepted a sucker’s bet: local economies that look worse than ever, local residents tempted into new forms of self-destructive behavior, and a dwindling flow of cash to show for it all.” Blech.

Also see this March 2017 article by CityLab, which finds that “Usually, the public benefits of gambling deteriorate over time”; that “Gambling is often criticized as a “tax on the poor” because of the disproportionate number of lower-income Americans who participate in it”; that “legalized gambling probably induces marginally greater economic inequality in the state, since low-income people tend to lose money through legalized gambling”; etc. Not encouraging.

A specific question for a casino in Bristol, Virginia is whether there’s a sufficient market size in that region for even one casino, let alone potentially multiple casinos. Hence, the reason for such urgency by the coal barons and others promoting their plan. As one of those promoters, Clyde Stacy, put it in the Bristol Herald Courier last fall:

“If somebody opens a casino in Kentucky or Tennessee, then I think our opportunity evaporates…I know this will be before the Kentucky Legislature this coming year. Tennessee, once they realize what we’re trying to do, may do a special session or something because this is big. It would be big for Tennessee or Kentucky. But, if we get in first, it’s not likely anyone would put a casino any closer than Knoxville.”

The Roanoke Times’ Dan Casey wrote in September about “rolling the dice on gambling in Bristol”, writing that “The Virginia General Assembly must act no later than 2019, they say, lest this golden opportunity slip away to Tennessee or Kentucky.” Casey notes a study Chmura Economics and Analytics of Richmond, which found that “gambling-minded tourists flocking to the Bristol region would shower it with an annual economic impact of $1.5 billion. One thousand new hotel rooms would be needed. The casino complex alone would employ 5,200 people.” But Casey is rightfully skeptical, writing that the casino proposal is “just the latest economic development pipe dream foisted on the small city,” that “The potential negative effects on communities have been studied and they’re real” and that “Atlantic City, New Jersey, is only one example.”  Casey concludes, “If the people of Bristol find themselves passing judgment on the proposal, let’s hope they take stock of that and other relatively recent pie-in-the-sky economic development schemes.”

Finally, check out this article at Bacon’s Rebellion (note: yes, I’m actually linking there, as I think this is a well-written piece, with some very interesting comments as well), which correctly concludes, ” when we evaluate the pros and cons of Virginia gambling legislation, let’s make sure we’re looking at the net benefit to Bristol and Virginia.” Also see some of the comments on that post, such as:

Last but not least, I’ve just got to emphasize how this whole situation epitomizes the legally corrupt “Virginia Way,” with the money and lobbyists pouring in to the General Assembly in an attempt to ram this thing through as quickly as possible. Why is any of that legal? Does this not epitomize why Virginia needs MAJOR ethics and campaign finance legislation, ASAP? Gross.

The bottom line is that casino gambling is, well, a gamble – and likely not a smart one, either. Instead of this questionable “roll of the dice,” how about focusing on/nurturing real economic growth opportunities? And no matter what, Virginia legislators should look long and hard at bills pushing for quick approval of this scheme – or any other – before even THINKING about signing off.