New Year’s Resolution: I plan to include a lot of analyses and forecasts by Chaz Nuttycombe (“State Legislature Pundit for @DecisionDeskHQ. Center-Left. Brutal realist. Tweets are often partisan, ratings are never.”) and other talented Virginia political pundits in 2019. Why? Because: a) I find this stuff fascinating; b) I believe this information is crucial, in order to know where we should focus resources (money, volunteers, etc.) and to have an effective/focused strategy to take back the Virginia General Assembly in 2019.

We’ll start with Chaz’s “best case scenario for Democrats in redistricting, and my corresponding ratings.” Note that no new map has gone into effect yet, and it’s possible that one won’t, depending on whether the Supreme Court decides to intervene, as Virginia House Republicans desperately want it to. Why are Virginia House Republican so desperate to block new, non-racially-“packed” districts? (note: see here for more information on the “Special Master”‘s report back on December 7, and note that a court hearing is scheduled for January 10) Because, as Chaz’s ratings make clear, they’d be in serious danger of losing a bunch of seats, including potentially Speaker Kirk Cox’s itself — as well as powerful House Appropriations Chair Chris Jones (R) and several other members of Cox’s majority (Barry Knight, Chris Stolle, Gordon Helsel, David Yancey).

With that, here are Chaz’s ratings in the “best case scenario for Democrats in redistricting.” Now, let’s just hope this actually happens… 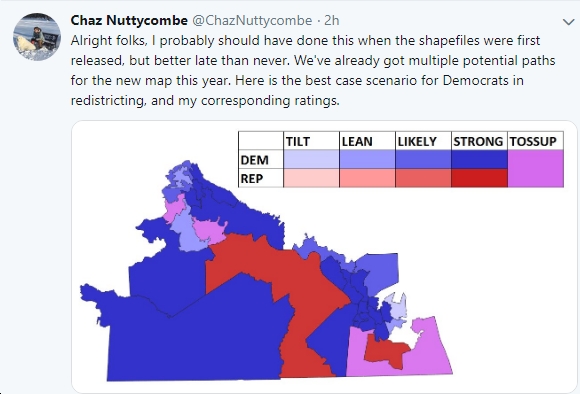 There would be 7 changes from my current district ratings under the Republican gerrymander map:

All of these changes would mean Democrats go from being favored to pick up 1 district in 2019 under the Republican gerrymander to 5 under the fixed map with the best case scenario for Democrats.