For anyone who ever argued that Virginia Del. Nick Freitas (almost certainly a future candidate for State Senate, Congress and/or statewide office) was less far-right extreme than his rival for the 2018 Virginia GOP U.S. Senate nomination, neo-Confederate Corey Stewart, there’s a lot of evidence that Freitas wasn’t any less extreme than Stewart, only extreme in slightly different ways.

A few days ago, I posted about Freitas writing that “if you are a leftist leaving your tax and regulation heavy state for one that doesn’t punish you or your business as much…can you please leave your politics back in the state you are fleeing,” and comparing people from blue states to “locusts” coming to eat red states’ “crops.” I also provided several other prime examples of Freitas’ extremism, such as  this bizarre, unhinged speech in the House of Delegates, in which he claimed that we “can’t have an honest debate” on the issue of guns because supposedly Democrats will never stop until all guns are taken away (e.g., “assault weapons,” which Freitas defines as “something that looks scary”).

Well, Freitas was back at it on the final day of 2018, with a “tweetstorm” o’ crazy. Check it out, below, including the gems:

And just remember, this nutter came oh-so-close (136,610-131,321) to being the 2018 Virginia GOP’s U.S. Senate nominee, losing to neo-Confederate/white nationalist Corey Stewart. Really tells you all you need to know about the Virginia Republican Party that those were the top two choices (possibly the most extreme of them all, Ewwwwww Jackson, was #3) 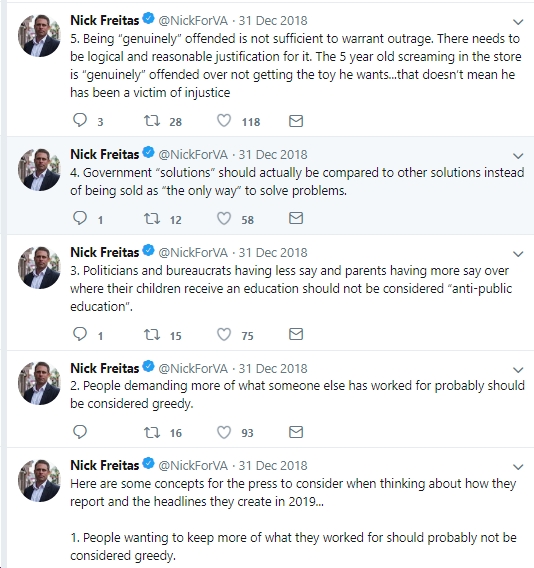 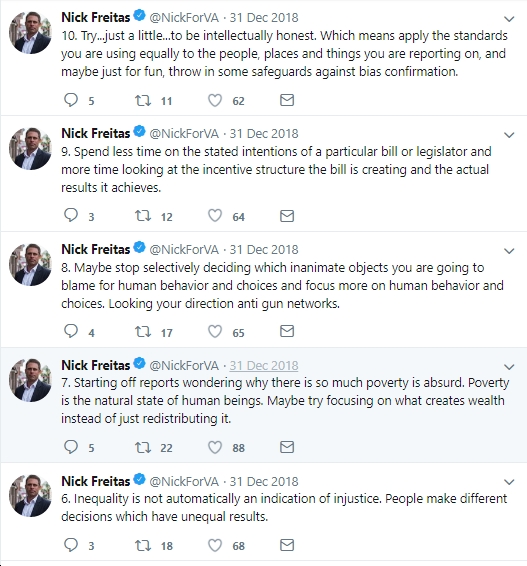