When it comes to money in politics, my view is that corporations certainly do NOT donate to politicians out of the goodness of their (non-existent) hearts. To the contrary, it seems obvious to me – and many others – that corporations donate money to politicians because they are hoping to get something in return. Here in Virginia, the prime example of that is Dominion Energy, but there are many other companies, with significant business before the state, that might want to influence said business.

For instance, take Amazon (please?), which recently struck a major deal (you might have heard of it? heh) with Virginia to move part of its “HQ2” to Arlington. Now, the Virginia General Assembly has a chance to weigh in, with legislation like SB 1255 (“Creates the Major Headquarters Workforce Grant Fund. A qualified e-commerce company that makes a capital investment of at least $2 billion in a major headquarters facility in Arlington County…”). Would a mega-multi-billion-dollar corporation like Amazon attempt to influence the Virginia legislature as it goes about considering what’s in the best interests of the Commonwealth? Well…yeah. Of course. Duh. So don’t be surprised if we see a bunch of donations from Jeff Bezos and Company in the next batch of campaign finance reports, due tomorrow.

With that as background, see below for a portion of an e-newsletter I just received from Del. Alfonso Lopez, who represents parts of Arlington County. According to Del. Lopez:

Prior to Amazon’s decision and the announcement to locate HQ2 in the Arlington-Alexandria region, I received a campaign donation from the company. After the official announcement regarding HQ2, I decided to return the contribution and will not accept any campaign contributions from Amazon.

While I would never allow a campaign contribution to affect my judgement as an elected official, trust in the government is essential. Constituents should have no doubts about the independence of my judgement or think there are any motivations beyond doing what is right for our community. This is the right thing to do. Fostering trust in government is more important now than ever.

I couldn’t agree more with Del. Lopez’s thinking here, and encourage every other delegate and state senator to do the same – refuse donations from Amazon as long as its massive deal with Virginia is before the legislature. More broadly, I’d recommend that elected officials be VERY cautious about taking money from ANY corporation with business pending before them. Just seems like commonsense to me. Nice job by Del. Lopez on this one. 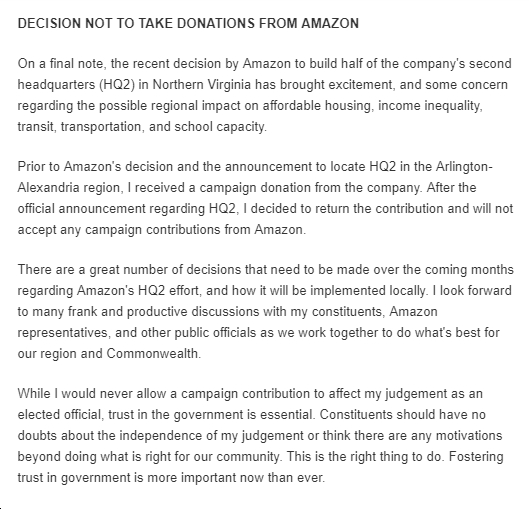 Challenger @RodHallforVA has gotten a bunch of endorsements recently, but this is a big one for incumbent Del. @guzman4virginia...from VA Speaker @EFillerCorn https://bluevirginia.us/2021/04/wednesday-news-biden-plans-to-cut-emissions-at-least-in-half-by-2030-will-the-derek-chauvin-guilty-verdict-change-policing-in-america-george-w-bush-shows-how-far-the-gop-has-fallen#comment-5353263499

If true...16k delegates so far for Youngkin, more than that for Snyder. How about for Cox and Chase? The VA GOP(Q) convention is set for 5/8...just 17 days from now. https://bluevirginia.us/2021/04/wednesday-news-biden-plans-to-cut-emissions-at-least-in-half-by-2030-will-the-derek-chauvin-guilty-verdict-change-policing-in-america-george-w-bush-shows-how-far-the-gop-has-fallen#comment-5353251462 h/t @BPaves