Well now, he’s baaaaaaack…this time with a petition “to Remove Gender Identity Language from Proposed Changes to [Loudoun County Public Schools] Equal Opportunity Policy.” According to the petition, which is filled with dangerous disinformation, hysteria and nonsense, if transgender students are treated with respect and equality in Loudoun County public schools, all manner of horrors will supposedly ensue. Such as: 1) “Students and employees will be forced to forfeit their right to physical privacy in showers, locker rooms, and bathrooms” (a favorite obsession of the far right); 2) it would actually be “harmful to those it is intended to help,” as to “systematically affirm to a child that he or she was born in the wrong body can harm his or her ability to accept his or her body from conception”; 3) this is supposedly “a highly controversial, highly politicized cause”; and 4) it would supposedly “endanger our children!” (note: that last comment is the most inflammatory and dangerous of all, but everything LaRock says is nasty, ignorant and harmful).

BTW, for the actual policy change LaRock is referring to, see here. Basically, all this says is that “The School Board of Loudoun County affirms a commitment to the principle of equal educational and employment opportunity for all persons regardless of race, ancestry, color, sex, pregnancy, childbirth or related medical conditions, marital status, age, religion, national origin, disability, sexual orientation, gender identity, or genetic information, and any other characteristic provided by law.” Horrible, huh? Nope, in fact it isn’t horrible at all. In fact, it should be totally non-controversial  about affirming equal opportunity for everyone, including transgender individuals. And it probably would be totally non-controversial, if it weren’t for right wingnuts and bigots like Dave LaRock stoking ignorance, hatred and fear for absolutely no good reason. Now, I realize that this is a “red”-leaning district, but in November, can we PLEASE replace LaRock with Democrat Mavis Taintor, and at least remove one of Virginia’s worst embarrassments from the House of Delegates? 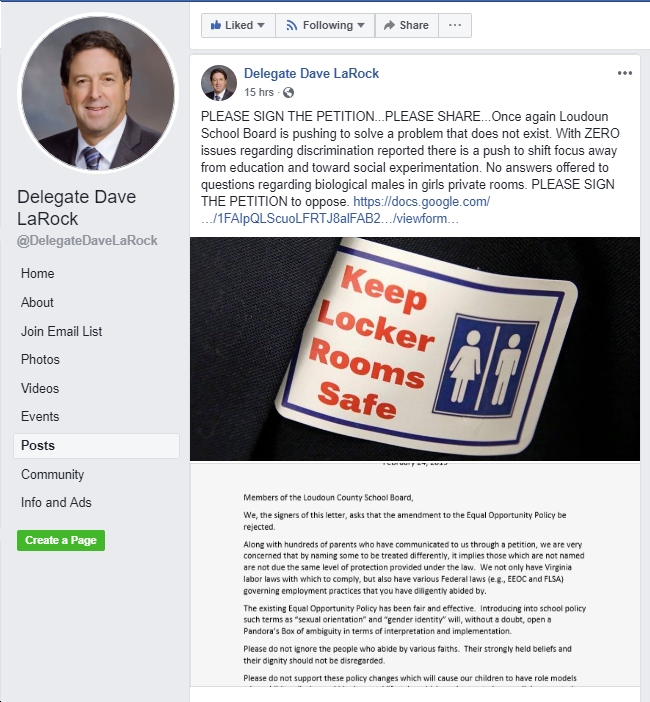 “Tonight the Orange Co. School Board is considering a proposal that would require schools to notify parents of students’ ‘self-identification'”