Statement from the House Democratic Caucus

“Today, House Republicans announced on the floor of the House that they will push forward with a meeting of the Courts of Justice committee to review the allegations against the Lt. Governor. Just before that, the Speaker’s office distributed a press release with the title, ‘ICYMI: Every way the Virginia House Democrats said no to reviewing sexual assault allegations against Lt. Governor Justin Fairfax.’

“House Democrats were among the first to call for Lt. Governor Fairfax’s resignation after the allegations were revealed, and we have maintained our view that the allegations need to be taken seriously. Moreover, Democratic leadership had simply requested a clear plan for a joint approach. Instead, we were met first with silence, and then with press releases.

“The Speaker and House Republicans are attempting to politicize these serious, criminal allegations. All parties involved deserve better.

“Democrats believe in the rule of law and the process embodied in the U.S. Constitution. Repeatedly, House Democrats have called for due process for both the accusers and the accused, and our leadership has attempted to work in a bipartisan manner, only to be publicly criticized by our Republican colleagues. Due process is not a talking point or a sound byte – it is a serious and fundamental part of our democracy and of justice. House Democrats met with Republican leadership several times over the past week, and Democratic leadership requested information and feedback that they never received from Republicans. Yesterday, Leader Eileen Filler-Corn sent a letter to Speaker Cox outlining the history of these communications, below.

“Even with the announcement today by Delegate Rob Bell, we lack any details or substantive information on how this meeting would proceed.

“If House Republicans want to talk about politics and compare our records of standing up for women and communities of color, then we look forward to seeing them on the campaign trail. But these allegations are not about campaigns or press releases, and we ask the Delegates on the other side of the aisle of the House to respect that.

“As we move forward, House Democrats will continue to consider only the best interests of the accusers, the accused, and the Commonwealth.” 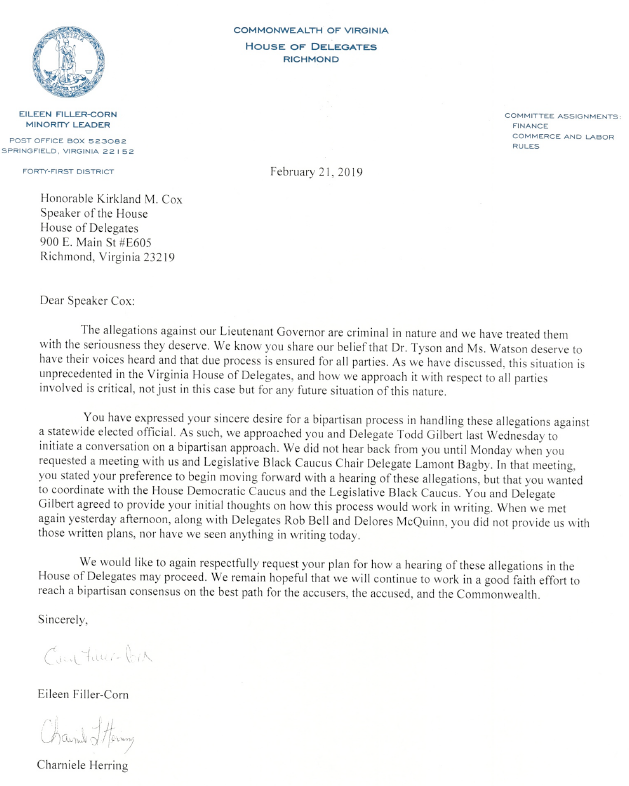 Fairfax CA Steve Descano: In Today’s Virginian-Pilot, AG-Elect Jason Miyares “gave a master class on how to show your ass”

One of the easiest "no-brainer" choices in the country this November: reelect Rep. Abigail Spanberger (D-VA07) by a landslide over her far-right-extremist, rapes-rarely-lead-to-pregnancy nutjob opponent. https://bluevirginia.us/2022/07/tuesday-news-the-ba-5-covid-surge-is-here-horror-in-highland-park-the-sixth-us-mass-shooting-in-seven-weeks-jewish-community-leaders-will-fight-attempts-to-restrict-abortion-in-virginia#comment-5907707597