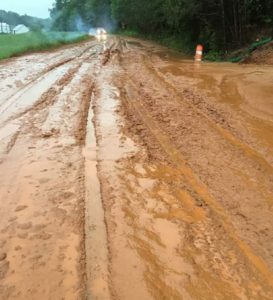 On August 21, 2018, a divided Virginia State Water Control Board (SWCB) voted not to consider revoking Mountain Valley Pipeline (MVP)’s Section 401 water permit in Virginia. Now, with the SWCB scheduled to meet this Friday, they need to revisit that decision for a number of reasons, including the potentially dramatic impacts of Variance 006, a project-wide variance allowed by the Federal Energy Regulatory Commission (FERC) on September 26, 2018.

When WCB members voted back in August, they did not know that the FERC was secretly weakening the project’s erosion and sedimentation control standards, hiding their actions from state regulators and the public. We now know that by May 2018, MVP had admitted to FERC that their theoretical desktop erosion and sedimentation analysis did not take site-specific constructability issues (elevations, terrain, and workspace) into account. During its subsequent field reviews, MVP determined that execution of the mitigation measures, as written, would pose increased environmental or landslide risks or be unsafe or impractical due to terrain or geology.[1]

On May 11, 2018, FERC’s senior consultant directed MVP to provide a site-specific scenario for each location where the plan would be changed. MVP quickly rejected site-specific plans as “excessive,” and FERC Project Manager Paul Friedman ignored his own expert consultant and sided with MVP.

While there is no evidence that FERC shared the new plans with Virginia’s Department of Environmental Quality (DEQ) or with Virginia DEQ’s West Virginia counterparts, FERC did ask the U.S. Army Corps of Engineers (USACE) for its opinion. Todd Miller of the Norfolk district replied on September 5, 2018:

“These actions would fall outside the jurisdiction of the Corps, however a failure in erosion and sediment control could potentially impact waters of the U.S. including wetlands.”

Christopher Carson of the Huntington District made a stronger statement on September 19, 2018:

“No information is provided indicating whether any of the changes would result in additional discharges of dredged and/or fill material into waters of the United States.”

Instead of requiring better planning and working with state regulators, FERC abandoned previous standards and issued a variance for the entire project (MVP-006) that enables MVP to bury pipe closer to the surface, abandon Best Management Practices the MVP had pledged to follow, and simply “monitor” for damage rather than mitigating the clearly negative impacts of their work. MVP’s request for this variance was posted on September 25, 2018 and approved by Project Manager Paul Friedman on September 26, 2018 – only 25 hours after it was posted.

On exactly the same day that MVP submitted the variance, the company reported that it expected to spend $4.6 billion on the project, a jump of about 25 percent over its previous calculation of $3.7 billion.[2]

By keeping correspondence secret, FERC denied information that would have informed decisions by FERC commissioners, the U.S. Fourth Circuit Court of Appeals and the Virginia State Water Control Board. Surely it would have mattered if decision makers had known that the MVP was unable to construct the project under the terms of the Final Environmental Impact Statement (FEIS). When the Water Control Board voted on August 21, 2018, the members did not know that MVP could not meet water quality standards. Nor did they know that MVP and the FERC planned to dramatically reduce the required standards by issuing a project-wide variance in September.

Virginia’s State Water Control Board meets again, this Friday (March 1), to review the permissions it has given to the MVP. At the very least, State Water Control Board members should vote to withdraw approval of MVP’s Erosion and Sedimentation plan, so that they can review the impacts caused by the much looser standards allowed by FERC’s Variance 006.

[1] Note: this op-ed is based substantially on a filing by the Indian Creek Watershed Association/ICWA to the Federal Energy Regulatory Commission/FERC on December 21, 2018 – Accession No. 20181221-5334. See my much more detailed blog summary here https://www.ratc.org/new-proof-entire-mountain-valley-pipeline-project-based-on-known-falsehoods/ . Unless otherwise noted, all quotes are taken directly from the ICWA filing.