When we look at the absolutely crucial role that Churchill played — from the time Hitler arose in Germany to the time that Hitler’s evil empire had been destroyed — we see an image of what we need in a Democratic leader for these times.

For these are times when the Democratic Party is the necessary protector of American from a Republican Party that has been taken over by an evil force and has put America on the brink of a whole range of possible disasters—from a slide toward authoritarian rule of a fascist kind to the deliberate endangerment of our future in the face of the crisis of climate change.

Although our battle, unlike Churchill’s, is non-violent, at its heart the same basic values are at stake. 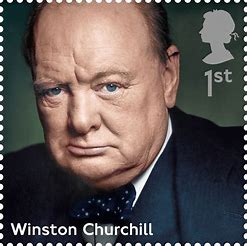 You may remember that around the turn of the millennium, Time Magazine named a “Man of the Century.” This was to be an exponentially bigger version of its famous “Man of the Year” designations—designations the magazine said were to be given on the basis of the magnitude of the person’s impact, not as praise for the nature of that impact. (So the Ayatollah Khomeini was once “Man of the Year,” despite his being considered an enemy.)

When Time named Einstein, I didn’t really agree because I didn’t think Einstein had the greatest impact on the whole of the 20th century. Not as impactful, for example, as Adolf Hitler.

My interpretation at the time was that Time chose Einstein over Hitler because it was thought too depressing to name as “Man of the Century” someone representing the very worst of humanity. They wanted instead someone who demonstrated something valuable and admirable about our kind and our times. So they chose a man of scientific genius to spare us having to look at what Adolf Hitler – with all the destructiveness he’d unleashed into the world (including the militarization of the world in the cold war — had demonstrated about ugly possibilities of humankind and its civilization.

Once we had seen how even the nation of Bach and Goethe could become so evil as Germany did when it made Hitler its Fuehrer, we could never again regard “civilization” as necessarily a path toward the betterment of the human world.

Hitler showed how dangerous a place history is—a place where evil can win. (That’s a frightening reality that we in America are – at this moment– compelled to face.)

But it could have been much worse. Hitler and his evil regime were defeated. And a most extraordinary leader was key to that outcome, for a strong case can be made that if it were not for Winston Churchill, the force of brokenness behind Hitler’s Germany could have done far more damage to the world.

(Only Churchill stood in the way of the general inclination of the cabinet to make an accommodation to Hitler, hoping to buy some autonomy for Britain as the price for accommodating itself to a European order for Europe created and dominated by a bunch of totalitarian, racist, murderous, genocidal, somewhat crazy, goose-stepping, power-hungry, sadistic thugs.)

If we want to choose a figure who had a very big impact for the good in the 20th century – an admirable “Man of the Century” –Winston Churchill would be someone to consider, someone with perhaps a greater impact than Einstein.

In America today it behooves us to consider the crucial role that leadership played in defeating that powerful force of evil. The force that has arisen in America is not so murderous, but it, too, is driven by cruel domination, by the insistence on conflict, by racist bigotry, by an unappeasable lust for power. And we, too, are challenged to block that force from extending its malign influence over our destiny.

For such reasons, the qualities that Churchill brought to the challenge of his times should inform what Democrats now seek in their 2020 nominee for President, when a force of evil has again been gaining power to destroy what’s best in our world.

From the time Hitler first took power through the great British sell-out to Hitler at Munich, Churchill was almost alone in seeing WHAT THEY WERE UP AGAINST, i.e. an unappeasable, dangerous evil rising to threaten their world.

A Churchill for the Democrats must likewise understand the nature and stakes of the battle.

For the past decade I’ve been reading one Churchill biography after another because the story of his leadership has felt so gratifying for me to follow.

And the reason that story is so gratifying is because it soothes the frustration I’ve felt (since the campaign of 2004) about the way the Democrats — who are my political representatives and the only alternative to this Republican Party in the struggle for power – have dealt with the Republican Party as it has been taken over by this dark and evil force.

The Democrats – good people with almost invariably good intentions and reasonable and constructive policy proposals — have dealt with the Republican Party with the same kind of blind spirit that characterized the prime ministerships of Baldwin and Chamberlain, who didn’t realize until it was nearly too late that what they were up against was not something with which one can bargain and seek common ground.

While the Republicans have been waging continuous war on the Democrats, the Democrats have until recently shown little understanding of the need to join that battle with equal intensity and determination to defeat the enemy.

While the Republicans have done the equivalent of seizing the Sudenland, and the Democrats have remained collegial.

Said Churchill in 1935, in his despair at the failure of Britain to rearm while he saw clearly how the danger was growing, wrote:

“It falls into that long, dismal catalogue of the fruitlessness of experience and the confirmed unteachability of Mankind. Want of foresight, unwillingness to act when action would be simple and effective, lack of clear thinking, confusion of counsel until the emergency comes, until self-preservation strikes its jarring gong—these are the features which constitute the endless repetition of history.”

In the case of Britain facing the Nazi evil, it was the invasion of Czechoslovakia and then of Poland that finally opened the eyes of those who had failed to see that what they faced was something that needed to be fought and defeated, not bargained with in a search for common ground.

In the case of the Democrats facing a Republican Party taken over by a destructive force, it has been the rise of Trump that has shown Liberal America and the Democratic Party what it is that we are up against in America today. As the outrages escalate and escalate—from torture ordered from the top, to birther lies, to stealing a Supreme Court seat, to giving us a monster as President – we should know that this outfit needs to be defeated, not accommodated.

When it became manifest that it was Churchill who’d been right, he moved from being “a voice in the wilderness,” shunned by the British political world, to Prime Minister who led his nation in what was to be – in a famous phrase of Churchill’s – “their finest hour.”

To win this battle, we need leadership that’s ready and able to “press the battle,” as Churchill was.

(When Churchill took over the Admiralty, he was always looking for ways to take the offensive. We need a Democrat with that kind of determination to win, which so far we’ve not much seen.)

By now, we should know that simply putting a Democrat in the White House will not suffice. We should all know that no matter who it is, the Republicans will make war on him-or-her rather than work with him-or-her.

Even after a successful election, only an effective fighter can be the successful leader the nation now needs.

Churchill, Britain’s wartime leader who may well have saved the West, said:

“War is horrible, but slavery is worse, and you may be sure that the British people would rather go down fighting than live in servitude.”

But the author of a truly outstanding new biography of Churchill (Churchill: Walking with Destiny, by Andrew Roberts, 2018) sees Churchill’s leadership creating rather than just reflecting that fighting spirit:

“[That declaration of British spirit] was a refrain he was to reprise regularly over the next six years, supported by his deep reading of history, but at the beginning of 1939 the British people were showing precious little of the willingness to fight that he had ascribed to them. Over the next six years, Churchill constantly averred that he was merely articulating the deep pride and bellicosity of the British people, but much of that spirit actually came from their visceral response to his vision, rather than originating from them.”

Likewise for us Democrats, leadership will be of utmost importance for winning this historically crucial battle.

And as with Churchill as Britain’s wartime leader, in choosing our 2020 nominee, we should seek a leader who is able to inspire and mobilize the considerable force for the good that still dwells in America. Inspire with a vision both of the evil to be defeated and of the good for which we fight.

We have a fine group of candidates in the running. Is there anyone among them who can lead us to the necessary victory as Churchill did for Britain?