Last December, there was a special election in House of Delegates District 24 to replace Ben Cline, incoming congressman in CD 6. Christian Worth won the Democratic nomination in a three-way firehouse primary. The Republicans had a four-way firehouse primary, and Ronnie Campbell defeated Jimmy Ayers by one vote – out of 2983 votes cast. No recount.

In a series of tweets at the time, we walked through the hypothetical: what would happen if a party chairman fails to submit the nominee’s name by the deadline? Particularly in the case of a special election?

That special election came and went. Ronnie Campbell became Delegate Campbell. But I wasn’t satisfied with an open question regarding filing extensions, so I decided to send a FOIA request over to the Department of Elections.

I requested copies of all documents and communications from November 10, 2018 until December 21, 2018:

(1) Concerning party nominations for the December 18, 2018 special election in House of Delegates District 24;

(2) Concerning candidate and/or party filing extensions for the December 18, 2018 special election in House of Delegates District 24;

(1) David Nichols, Election Services Director at the Department of Elections, emailed the appropriate registrars 51 minutes after the November 19, 2018 filing deadline had passed. He informed them: “We anticipate the candidate [Ronnie Campbell] did not meet [the 5pm] deadline, but we could be wrong. In the meantime, we have provided the candidate/party with information on an extension of the filing deadline as allowed by 24.2-503.”

Mr. Nichols was referring to the Certificate of Candidate Qualification and Statement of Economic Interests, both of which were due from candidates by 5pm on November 19th. 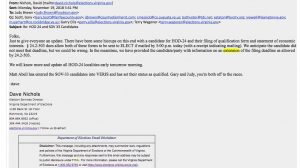 (2) The next morning, over 18 hours after the filing deadline, Mr. Nichols emailed the Campbell campaign and attached a memo from the Commissioner of the Department of Elections, Christopher Piper. The email suggests Nichols is aware of an “original shipment with the incorrect Qualification Form and SOEI” from FedEx.

Commissioner Piper, appointed by Governor Northam in 2018, was bcc’ed on this email. 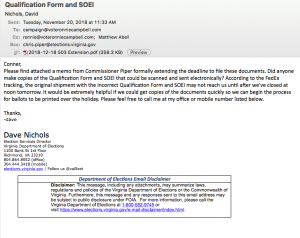 (3) The “memo from Commissioner Piper” referenced above grants a 10 day extension for the submission of the Certificate of Candidate Qualification and/or Statement of Economic Interests:

“Under that authority, I am granting an extension of 10 (ten) days from today’s date. Candidates who have not timely filed their Certificate of Candidate Qualification and/or Statement of Economic Interest in relation to the December 18, 2018, Special Election for House of Delegates District 24, may submit the documents to the Department of Elections no later than 5:00 p.m., Friday, November 30, 2018.”

Mr. Nichols proactively provided this information to clarify the law:

If that’s the case, then these secret extensions for last year’s HD 24 special election appear legal.

Candidates for 2019 primaries in Virginia have to submit their filings and signatures by 5pm today. But if some candidates fail to submit their Certificate of Candidate Qualification or Statement of Economic Interest forms, perhaps we should expect Commissioner Piper to unilaterally and automatically provide a 10 day extension? Wouldn’t the same expectation apply to candidates filing on June 11?