UPDATE: To listen to the audio of NARAL Pro-Choice Virginia’s press call this morning on the poll, click here. As NARAL’s Executive Director, Tarina Keene, put it, the General Assembly veto session next week will be met by a “speak-out for abortion access, to remind legislators we are the majority, and that we all expect our elected leaders to support Virginians’ reproductive freedom.” Keene added that “in recent weeks, anti-abortion politicians in Virginia and across the country have launched a stunning disinformation campaign to score political points in an effort to maintain power and control…[with ] the ultimate goal to outlaw and criminalize abortion,” even though “the overwhelming majority of Virginians support protecting and expanding access to abortion care,” as shown by research, focus groups and polls such as this one by Public Policy Polling. One last thought from Tarina Keene that’s worth emphasizing: “We will not stand by and allow anti-abortion politicians to get away with their fact-free, ideological agenda to deny women access to abortion and criminalize anyone who has an abortion.”

***********************
Based on the right-wing’s reaction to Del. Kathy Tran’s bill making it a bit easier for women to get the medical care they need in the *very* rare, and always tragic, cases of “late-term abortion,” you’d think that: a) nothing like Tran’s bill had ever been put forth previously (in fact, “[s]imilar legislation has been introduced in past years,” but this year Republican decided for cynical, calculated political reasons to try and make a big deal about it); b) that it was about “infanticide” (obviously it wasn’t; not even sure how Republicans could twist it to claim *that* lunacy); c) that these types of abortions are common (in fact, “In Virginia, there have been two late-term abortions since 2000, according to the state department of health”); or d) that most Virginians oppose access to late-term abortion if the woman’s life or health are in danger (in fact, a WaPo/Schar School poll in February found that Virginians, by a 60%-33% margin, support legal abortion in the third trimester of pregnancy if the woman’s health is at risk).

Now, another poll (see polling memo, below) – also conducted in February, but just being released now – shows strong support by Virginians for legal abortion. That includes a 68%-20% margin who “believe that, should complications arise later in pregnancy that put the life or health of a woman at risk, a doctor should be able to determine if the pregnancy should end in order to prevent risking the woman’s life or health.” It also includes, by a 72%-25% margin, Virginia voters who “believe that abortion should be legal,” and 75% who “agree that a woman who faces geographical or financial barriers should be able to get the care she needs throughout pregnancy.” Also note that 70% of Virginia voters think a woman “should be able to make the decision to end a pregnancy endangering her life or health,” and that 61% do *not* think – as Virginia House Republicans apparently do – that “a woman should be forced to carry a pregnancy to term if her doctor has indicated that the fetus will not survive or the baby, once born, would not survive.”

Given all these numbers, what’s kind of strange is that Republicans think they have a winning issue here. But then again, this isn’t about appealing to the (large) majority of Virginians; it’s about revving up the right-wing “base” by telling them phony horror stories about “infanticide” and such, by wildly exaggerating the prevalence of late-term abortions in Virginia (again, they are exceedingly rare), and by hysterically and falsely demonizing Democrats. The question is, will Democrats respond by turning out in droves this November or will we let Republicans get away with their demagoguery and assault on women’s reproductive freedom? The answer to that question should be crystal clear: a) volunteer for Virginia Democrats: b) donate to Virginia Democrats; c) VOTE for Virginia Democrats this November! 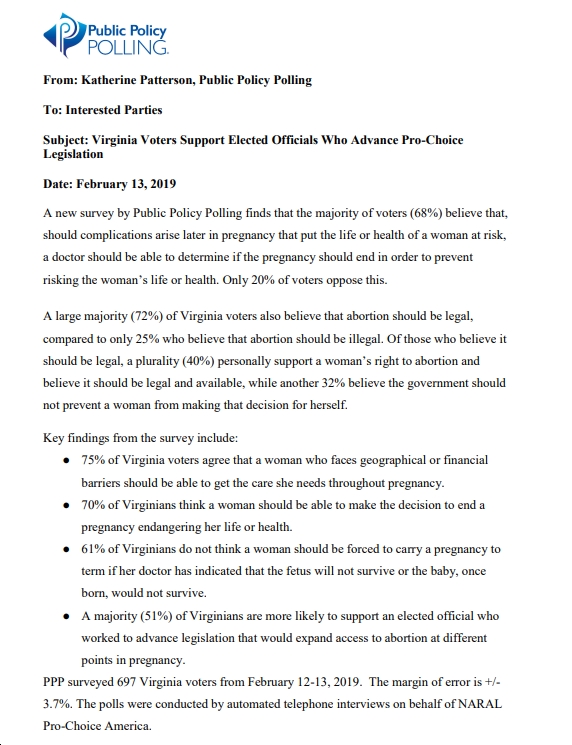