Who knows what former Virginia Governor Terry McAuliffe (aka, TMac, “the Macker,” etc.) will do, but he *did* say that he was going to decide if he’s running for president by the end of March, and Monday morning at 8:05 am would certainly fit that timetable. But seriously? Announce for the *Democratic* nomination on far-right, conspiracy-theory-la-la-land Trumpster radio? Doesn’t seem like a very smart move to me, given that TMac already isn’t particularly (or at all) popular among progressives, enviros, etc. – and for good reason!  And sure, we don’t know he’ll actually announce on Trumpster radio. But again, 8:05 am Monday (April Fool’s Day, appropriately enough, because the joke would be on all of us! LOL) would certainly fit the timetable TMac previously laid out…

Former Virginia Gov. Terry McAuliffe To Appear On The John Fredericks Show Monday, April 1 at 8:05 AM 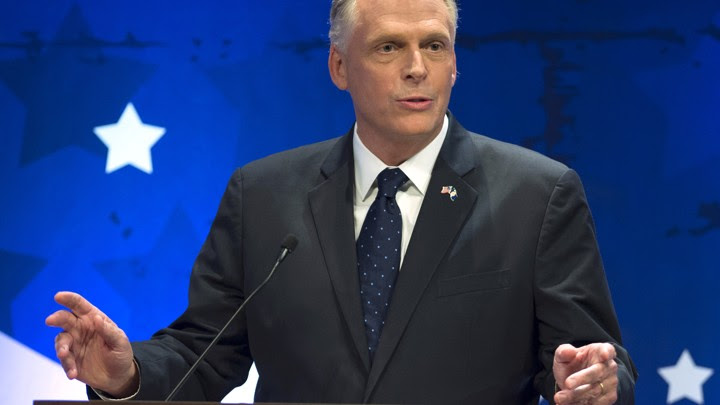 I call him “Governor McGenius” for a reason.

Terry McAuliffe had an impressive record of success as Virginia’s chief executive. He brought in $7 billion of new business — and his administration was scandal-free, in stark contrast to the Democratic political clown show that has dominated Virginia government in 2019.

Can he translate that success to a top-tier run for President?

RICHMOND, VA–The #GodzillaOfTruth and WJFN News Talk Radio 100.5 FM is starting April with a jolt of energy – former Virginia Governor Terry McAuliffe, arguably the most energetic man in politics, is scheduled to help kick off the month with an 8:05 a.m. April 1 (April Fool’s Day) appearance on the John Fredericks Radio Show.

McAuliffe is the business deal-making 72nd Governor of Virginia known for his boisterous energy and volubility. He previously served as Chairman of the Democratic National Committee, as Co-Chairman of former President Bill Clinton’s 1996 re-election campaign, and as Chairman of Hillary Clinton’s 2008 presidential campaign. At the moment, McAuliffe is seriously considering a run for the presidency in 2020.

Locally, he’s the face of a digital billboard visible along Interstate 95 in Richmond promoting WJFN 100.5 FM. The billboard features a picture of McAuliffe in the Governor’s Mansion holding a frosty pint of beer (see image below). Its tagline – “Miss Me Yet?” – is a winking reference to people who might be surprised to find themselves yearning for the days of McAuliffe’s governorship in light of the controversies that consumed the State Capitol this winter.

“Governor McAuliffe has been a regular guest on our program over the years and we’re excited to have him join us on April 1 to help jumpstart the month and our Monday morning,” said John Fredericks, an accomplished media executive who is the host and founder of the John Fredericks Radio Show, and a lead proprietor of WJFN 100.5 FM.

“Join us on April Fool’s Day for what’s sure to be a rollicking conversation about the state of Democratic Party in Washington,” Fredericks said. “We’ll ask him what the future holds. Will he run for President? Can he be the nominee? Does he have a path? What about Bernie and AOC? Has his time passed, or…are Democrats ready for Terry?”

Find out Monday. The John Fredericks Show will be live from Miami, Florida.