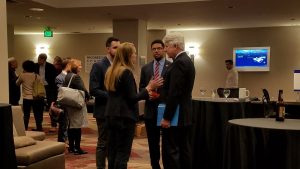 by Jennifer Lewis, 20th District House of Delegate Candidate 2019 (note by Lowell: to contribute, click here; also see Lewis’ op-ed in this morning’s News Virginian, “We must stop the pipeline“)

Once again, I attempted to talk to an elected official about the pipelines this weekend at a candidate training in Richmond, and was again told “there’s nothing I can do.”  As someone who has run for federal office and is currently running for state office, I cannot imagine saying this to a constituent.

In the last five years, I have been told by two Governors (McAuliffe and Northam), one Lieutenant Governor (Northam, again), and one Attorney General (Herring) that there is “nothing they can do” with regards to the pipeline issue.  I am surprised that the top three officials in Virginia state government think they have such little power or influence.  I am frustrated by their refusal to stand up for the environment, protect our water, and fight for private property rights.  I am shocked that many Democrats talk badly about Republicans who refuse to accept that climate change is real, but are okay with Democrats who accept campaign contributions from Dominion and are the biggest cheerleaders for a pipeline that symbolizes our refusal to move away from dirty, fracked gas to renewable forms of energy.

Friday evening in Richmond, I ran into Attorney General Mark Herring and asked to talk to him about the Mountain Valley and Atlantic Coast pipelines.  The room was nearly empty after a networking event, so I figured this would be an excellent opportunity to speak with him one-on-one.  Herring immediately stated that there was nothing he could do, so I pushed back on his statement, bringing up the numerous violations by the Mountain Valley Pipeline.  Herring began to say that he couldn’t do anything because of the State Water and Air Boards. I interrupted him and reminded him that those boards are corrupt.  I mentioned the corruption of the Virginia Department of Environmental Quality (DEQ) and how DEQ Director David Paylor went on a lavish vacation to the Masters Golf Tournament that Dominion paid the $20,000 tab for.  I was begging him to step in and do what he knew was right.  I looked him in his eyes and told him how impacted landowners and communities needed him to do the right thing.  Herring refused to be honest with me and was quickly whisked away by his staffers.

I cannot stress how disappointed I am. Bbut then again, I am not surprised, because we have been let down by our elected officials numerous times over the last five years. Those would be the officials that we count on to be our voice in Richmond – the voices we voted for to protect our best interests.  The silver lining will be that when we stop this pipeline, we can celebrate what we – neighbors and communities – did by standing together with no support from our elected officials.  We will have done this on our own, and the top state elected officials will not be able to take any credit for stopping the environmental disaster the Atlantic Coast Pipeline will be. They also won’t be able to take any credit for stopping the violations already happening along the Mountain Valley Pipeline route, which will be stopped by heroic fighters like Wild Virginia and the Southern Environmental Law Center.

I hope that as people head to the polls in November 2019 and 2020 – and the primaries in between – that they will stand with the environment, take a stand against corruption and vote “no pipeline.”  We must vote out the people who are putting profits over people. I am running for the 20th House of Delegates district this year to represent parts of Nelson and Augusta County, Highland County, Staunton City, and Waynesboro City in the Virginia General Assembly.  The 20th House district is facing 64 miles of proposed Atlantic Coast Pipeline, making it one of, if not the most, impacted districts in terms of miles of pipeline in the Commonwealth.  I have made stopping the Atlantic Coast Pipeline and everything it represents one of my top priorities during my 2019 campaign. I ask for your support in these efforts.