I wrote about this possibility and put up a poll the other day.

Should first-term Del. Debra Rodman (D-HD73; Henrico County; 53% Northam district) run for reelection or step up and run for State Senate against incumbent Siobhan Dunnavant (R-SD12; Henrico County and a bit of Hanover County; 52% Northam district)? There’s been a bunch of chatter about that the past day or so, following this RTD article, which reports that Mark Bergman, the director of Ralph Northam’s PAC, apparently has been encouraging Rodman to run for State Senate.

So where does that leave Del. Debra Rodman? If I were her, I’d seriously consider whether to run for the State Senate seat instead of reelection to the House of Delegates. But, in the final analysis, I hope that Rodman runs for reelection, given that we really need to hold that House of Delegate seat, and we really don’t need Dunnavant’s State Senate seat. Also, I’m not convinced that with sufficient support, we can’t beat Dunnavant with one of the two candidates – and I lean strongly towards us nominating a female candidate to take on Dunnavant – currently in the race. And finally, I really would prefer not to see anger among activists supporting Lothe or Jones potentially hurting Democratic unity…just when it’s been vulnerable due to what went down in February. What do you think?

Also, the poll results had around 70% wanting Rodman to run for reelection to the House of Delegates, around 24% wanting her to run for State Senate, and around 6% ambivalent.

Well, as you can see below below, Rodman clearly didn’t listen to that advice. LOL Anyway…we’ll see what happens, including Dems finding a strong replacement candidate for Rodman in HD73! 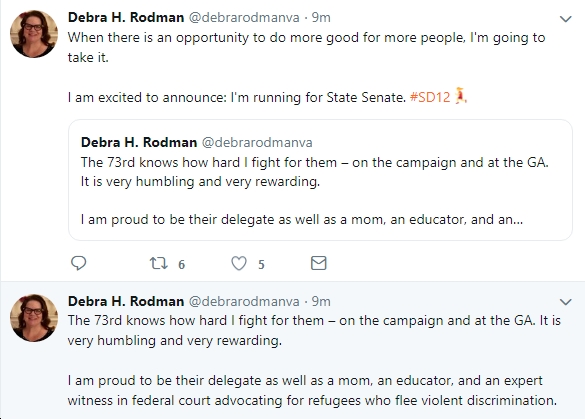