I missed this poll by Change Research (an online pollster rated C+ by FiveThirtyEight.com) when it came a couple weeks ago, but someone forwarded it to me this morning, and there’s some interesting information in it about the SD35 (Fairfax County, Falls Church and Alexandria) Democratic primary between incumbent Sen. Dick Saslaw, challenger Yasmine Taeb and challenger Karen Torrent.

First, check out the “likely voter” demographic breakdowns, which seem skewed too heavily towards the older (45% aged 60 or older), whiter (69% “White/Caucasian”) side. I mean, yeah, historically that’s been the case in what have normally been super-low-turnout “off/odd-year” primary elections, but I really suspect that this “off/odd-year” could be different (e.g., somewhat younger, more diverse, higher turnout) due to continued anti-Trump energy among the Democratic base…and beyond. Also note that this district’s population is HIGHLY diverse, so that Change Research’s predicted electorate doesn’t at all resemble SD35’s actual makeup (26% Hispanic/Latino, 18% Asian American, 13% African American, 15% “Other”). And if turnout on June 11 looks more like the diverse district rather than the typical, historical voter turnout pattern, it seems to me that the results could also look a lot different. But we’ll see who shows up, I guess…and how good the campaigns are at getting out their voters. 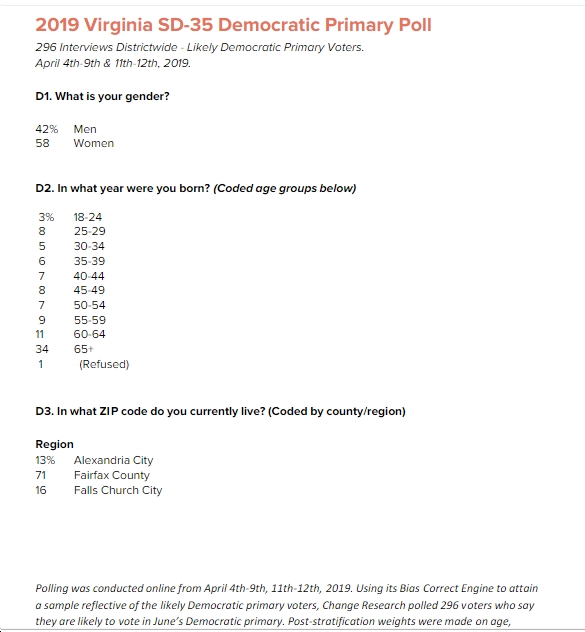 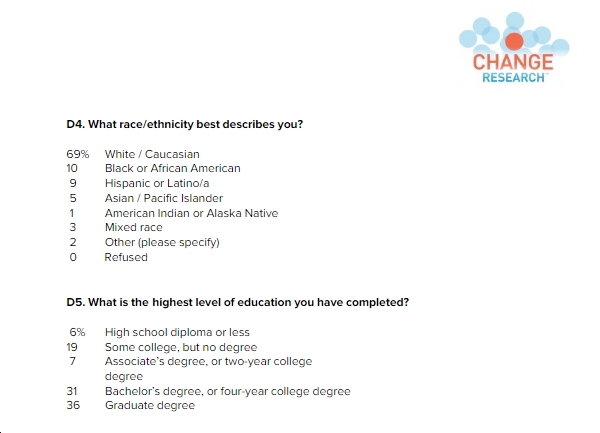 Regarding the State Senate race, note that only 56% of likely Democratic primary voters have an opinion of the incumbent, with much smaller percentages (25% for Taeb, 10% for Torrent) have opinions about the challengers. So clearly, there’s a lot of room for change in the horse race numbers, assuming Taeb and/or Torrent have the ability to communicate – and communicate effectively – with the voters.

As for the initial “horse race” numbers, it’s Saslaw 53%-Taeb 23%-Torrent 9% — not particularly surprising given the name ID numbers, and it shows the challenge facing Taeb and Torrent (or any challenger to an entrenched incumbent, really). However…see below for what happens if – and it’s a very big “if” of course – Taeb and/or Torrent are able to communicate Saslaw’s “negatives” to voters before June 11. 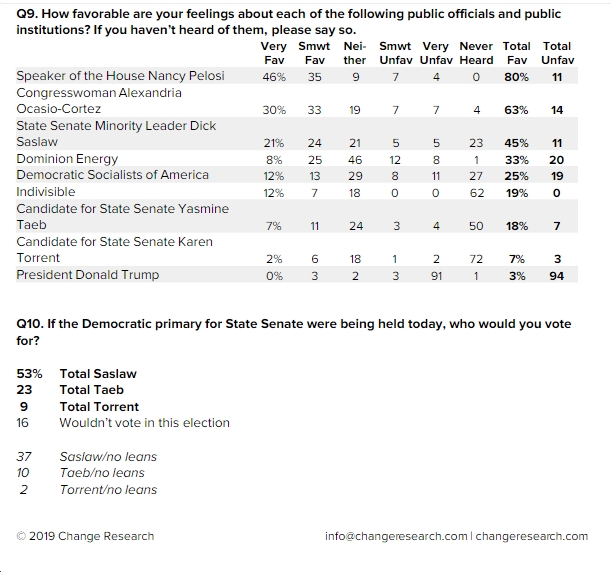 So what *are* Saslaw’s negatives? Per Change Research (see Q11, below), 71% of likely Democratic primary voters say they’d be LESS likely (vs. just 4% more likely) to vote for Saslaw if they knew he’d “taken tens of thousands of dollars from the payday lending industry, while voting against a bill that would cap annual interest rates for payday loans at 36 percent.” So that one’s really bad. As is the next one – that Saslaw “has accepted $350,000 from Dominion Energy in exchange for stopping his own party’s attempts to ensure Virginians receive refunds from Dominion for their inflated electricity bills” (5% are more likely to vote for him vs. 69% less likely). Voters also aren’t thrilled that “In 2015, Dick Saslaw told Muslim candidate Atif Qarni that Muslims cannot win elections for public office, in order to dissuade Qarni from running” (4% are more likely to vote for him, 64% less likely).

Now, these statements are obviously framed in a very negative manner, and I’m sure that Dick Saslaw and his supporters would argue that they are either totally false or highly distorted. But the point here is to measure what happens if these “negatives” (or other, similar “negatives”) are communicated to likely Democratic voters – and the answer there seems clear; that overwhelmingly, they’d be less likely to vote for Saslaw. 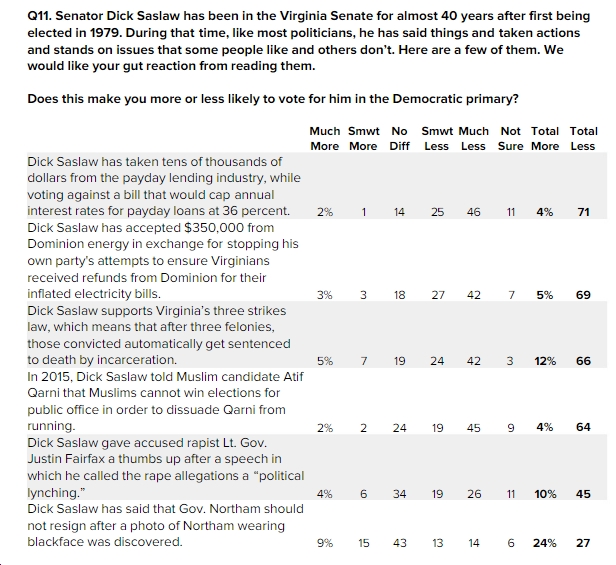 Finally, see below for how the “horse race” numbers change, following the statements about Saslaw being read to the likely voter. As you can see, this swings the election from Saslaw winning 53%-23%, to Saslaw actually *losing* 36% (Taeb)-32% (Saslaw)-14% (Torrent). Of course, this assumes that the negative messages listed above are a) communicated clearly – and that they “penetrate” – to all likely Democratic primary voters; and b) that the negative messages aren’t refuted, or not refuted effectively. It seems to me that both “a” and “b” are (highly?) unlikely, which in turn means that the final “top-line” numbers are also (highly?) unlikely. Still, the changing “horse race” numbers *do* illustrate the crucial importance of communicating one’s message – positive and/or negative – to voters, and why it matters so much that a candidate has the resources (e.g., money, volunteers) to do so.

Finally, note that the presence of not one but *two* challengers in this race clearly splits the anti-incumbent vote, making it more likely that Saslaw will be able to win reelection, even if it’s only with a plurality. We’ve seen this dynamic many times over the past few years, where there’s one incumbent or de facto incumbent (e.g., Don Beyer in the VA-08 Democratic primary in 2014; Jennifer Wexton in the VA-10 Democratic primary last year) and multiple challengers. The fact is, it’s a lot more likely a challenger will defeat an incumbent if there’s only *one* of them, not two or more… 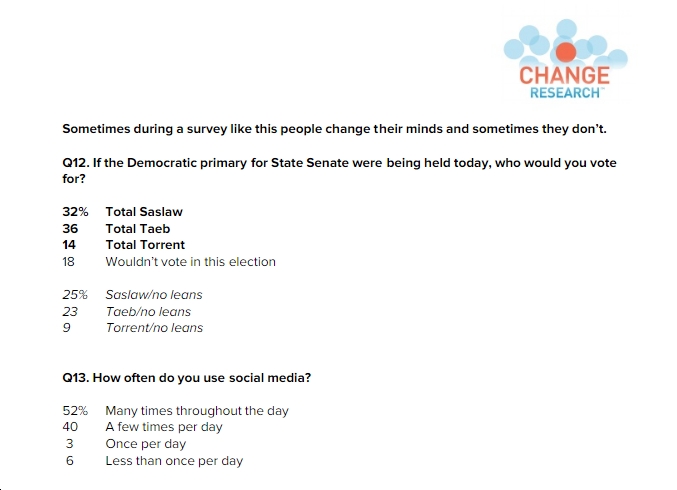