April 3, 2019 (Washington, D.C.) – This week Rep. Don Beyer (D-VA), a member of the House Science Subcommittee on Space and Aeronautics, led an appropriations request to protect funding for NASA’s Wide Field InfraRed Survey Telescope (WFIRST) mission. The President’s recently-released budget recommended the elimination of the mission, even though it was identified as the top priority on the National Research Council’s most recent astrophysics Decadal Survey in 2010, and is expected to lead to key scientific discoveries related to the origin and evolution of the universe, and potential for life on exoplanets. Rep. Beyer’s letter sought “at least $542 million” for WFIRST in FY2020.

“I was disappointed to see the President’s budget again request cuts to key NASA science programs, despite strong support for those missions in the scientific community,” said Rep. Beyer. “I am hopeful that Congress will continue investing in scientific programs and space exploration, which return enormous value to the American people. Several years ago I asked NASA Administrator and former astronaut Charles Bolden what NASA’s constancy of purpose should be, and without hesitation he said ‘science.’ WFIRST and other top scientific priorities at NASA deserve support and funding from Congress, and I will continue to push for the successful development of these missions.”

Beyer questioned NASA Administrator Jim Bridenstine about funding cuts to NASA education and science programs, including WFIRST, in the President’s budget during a Science Committee hearing this week. A signed copy of the letter is available here, and text of the letter is below.

Representative Beyer has served on the House Science Subcommittee on Space and Aeronautics since taking office in 2015. He has been a consistent advocate for NASA missions, including the James Webb Space Telescope, which he viewed during a tour of NASA’s Goddard Space Flight Center, its Earth Science Division, and Virginia’s Wallops spaceport. He was a featured panelist at the Washington Post’s Transformers: Spacediscussion on the future of space exploration in 2018.
***

As Members with a strong interest in U.S. leadership in space, we thank the subcommittee for its commitment to funding key NASA programs. We write to specifically urge you to include at least $542 million in FY 2020 appropriations for NASA’s Wide Field InfraRed Survey Telescope (WFIRST) mission.

WFIRST will provide unparalleled views of the outer solar system, planets around other stars, the stellar populations of nearby galaxies, and distant galaxies throughout the universe – leading us to compelling scientific discoveries related to dark energy and exoplanets, and thereby allowing us to maintain U.S. scientific leadership. Currently under development at NASA Goddard Space Flight Center, WFIRST is intended to have the sensitivity of the Hubble Space Telescope with 100 times the field of view, to allow us to better study the areas of dark energy, exoplanets, and galactic astrophysics. The data from WFIRST’s mission will allow astronomers to answer some of the most high-priority scientific questions facing humanity, related to the origin and evolution of the universe, and the potential for life on planets around other stars.

For these very reasons, the National Academy of Sciences ranked WFIRST as the highest priority large space mission during its last Astrophysics Decadal Survey in 2010. The project is set to launch in 2025 from Cape Canaveral, and requires robust ongoing funding to meet the project schedule. Accordingly, for FY2020, we are requesting at least $542 million for the WFIRST mission.

We thank the subcommittee for continuing to fund the WFIRST mission, and for its ongoing commitment to science. In order to maintain our leadership in space and assist in answering these integral scientific questions, we urge the committee to provide robust funding for WFIRST again this year.

Thank you for your consideration of this important program. 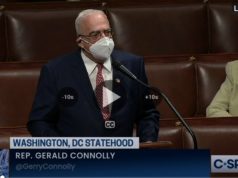