There’s an important special election this coming Tuesday for Board of Supervisors in Prince William County’s Neabsco District. The seat is vacant due to the death on February 6, 2019 of long-time Supervisor John Jenkins (D). Also note that this district is deep blue, with Sen. Tim Kaine crushing neo-Confederate Corey Stewart last year by a huge margin, and with Jenkins rarely even drawing a Republican opponent.  Now, the seat is open, and there’s a Democrat (Victor Angry) and a Republican (Devinder Singh) running. And although Democrats certainly *should* win this race, it’s a huge mistake to ever take any election for granted. Instead, I urge everyone to turn out and vote for Victor Angry on Tuesday.

Need some more motivation? Consider that right now, there’s only one Democrat (Frank Principi) on the Prince William County Board of Supervisors, which means that there’s not even someone to “second” a motion by Principi. Also, Victor Angry is impressive – among other things, he’s “the first African American to hold the position as Command Sergeant Major of the entire Army National Guard”; “a volunteer firefighter with the Dale City Volunteer Fire Department”; and “a member of the Governor of Virginia’s Board of Veteran’s Services (BVS), Blacks in Government (BIG), the National Association for the Advancement of Colored People (NAACP) and Veterans of Foreign War (VFW).” Also note that tonight, Sen. Tim Kaine is holding a fundraiser for Victor Angry, so check that out if you can.

Finally, consider that Devinder Singh’s donation record (see below) includes $1,800 to neo-Confederate extremist Corey Stewart, and $250 to climate-science-denying wacko Ken Cuccinelli. According to this article, “Singh was an outspoken and early supporter of Corey Stewart during his 2017 gubernatorial primary race and signed letters of support as a Prince William County faith and business community leader.” And according to this article, Singh “said he liked Stewart’s pro-business, tough-on-crime record as chairman of Prince William’s supervisors” and absurdly claimed that “Stewart’s stance on immigration has ‘nothing to do with racism.'”

Finally, check out Kenny Boddye’s article on this race, which notes that if Angry wins on Tuesday, he “would become the first African American to be elected to the board in our county’s nearly three-hundred year history.” That’s amazing. And how are Prince William County Republicans working to stop history from being made? As Kenny Boddye says, “Prince William County Republicans have gone back to their Corey Stewart roots, mudslinging at Democrats — including myself — with fear-mongering, smears, and straight up lies.” Let’s all make sure that the Republicans don’t succeed, and instead that Victor Angry wins a resounding victory on Tuesday. It’s all about turnout, so please tell every Democratic voter you know who lives in Neabsco district to put that on their calendar! 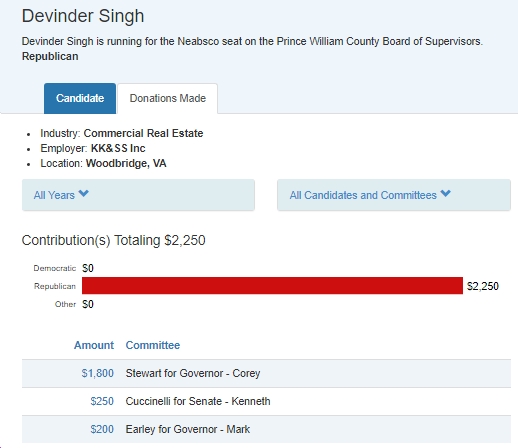 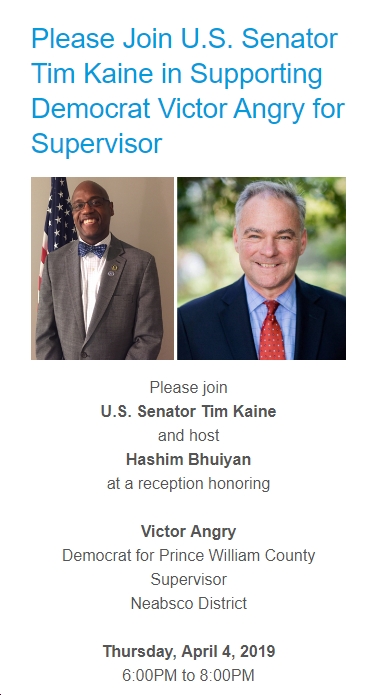