I just got the following in my inbox from former Del. Chris Saxman (R) of Virginia FREE. a pro-business, STRONGLY Republican-leaning group (e.g., check out Virginia FREE’s legislative rankings, which not surprisingly find basically all right wingers at the “top” and all progressives at the “bottom”). For more on Virginia FREE, see Taking the Reverse of the New “Virginia FREE” Rankings is Far More Accurate, in which among other things I  noted that Project Vote Smart clearly shows how anti-labor, anti-LGBT equality, anti-choice, anti-environment, etc. Saxman was as a delegate. I also wrote that Virginia FREE’s claims to be “steadfastly non-partisan” and also that “political party identification is never considered in our deliberations” are completely laughable, as this is a group headed up by a former hard-right delegate and which almost ALWAYS rates Republicans good, Dems bad.

So keep all that in mind as you check out Virginia FREE’s rankings and analysis, below. Also keep in minds, as Virginia FREE notes, that these rankings are of what Saxman et al. believe to be “the most important nomination contests is based upon those races which will show the direction of the two major political parties ahead of the 2020 presidential cycle” and are “not based on competitiveness!” With that, see below for the Virginia FREE rankings, preceded by comments by yours truly.

First off, let me start with my area(s) of agreement with Virginia FREE’s rankings and analysis. In general, I actually *do* agree with Virginia FREE on how most of the listed races are leaning right now. For instance, I *do* think that Sen. Barbara Favola (D) is strongly favored to win her primary, as are Sen. Emmett Hanger (R), Sen. Dick Saslaw (D), Sen. Frank Ruff (R), Sen. Lynwood Lewis (D), Sen. Bryce Reeves (R), Del. Alfonso Lopez (D), Del. Chris Peace (R). And I *do* think that Del. Lee Carter (Democratic Socialist) could be in for a very tough race against Mark Wolfe (R-turned-D). I’m not sure about Del. Kaye Kory (D)’s race against challenger Andres Jimenez (D), but given that she’s the incumbent, I’d give her the edge (I’d say “Leans Kory” rather than “Likely Kory,” as I definitely think that Jimenez is very impressive and has a shot here). As for Del. Bob Thomas (R) vs. Paul Milde (R), I’m not sure, as it really depends how much the anti-Medicaid-expansion, far-right, Tea Partier “base” turns out…or doesn’t.

Now, for my (many) disagreements with Virginia FREE’s analysis. 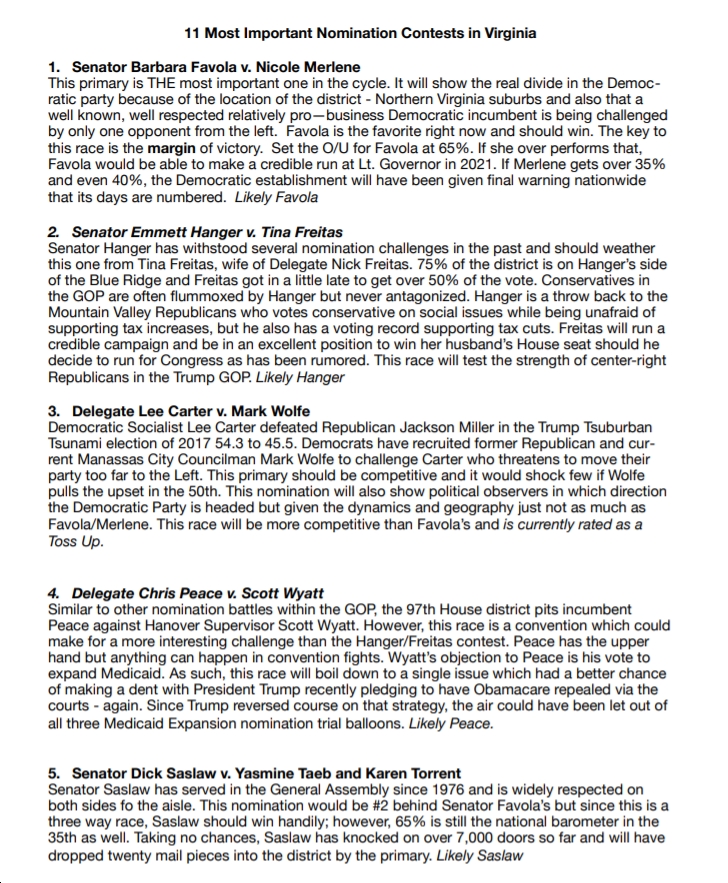 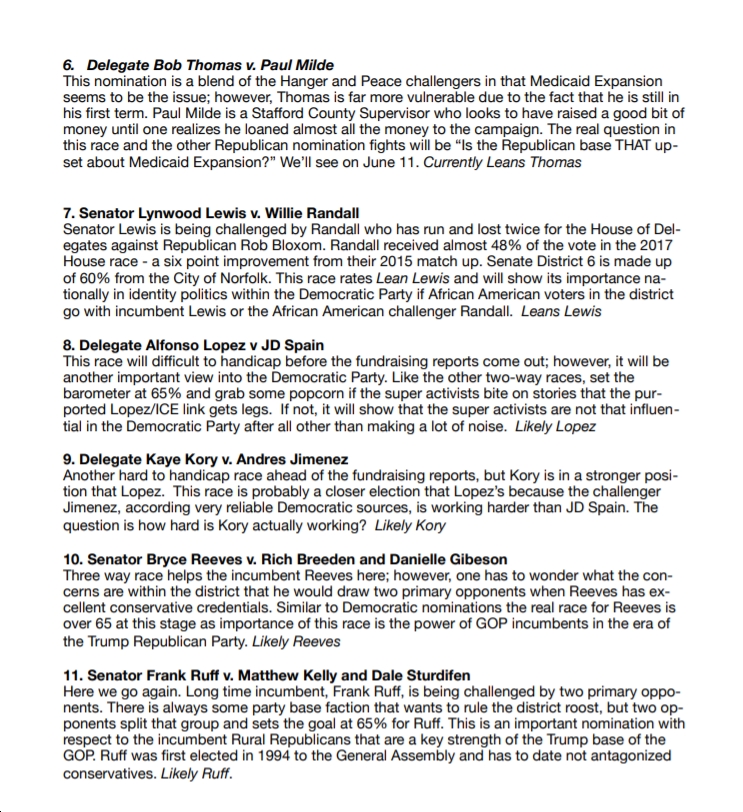