Today, Chaz Nuttycombe turns his attention to HD-84, a “Virginia Beach-based district is represented by Glenn Davis, former candidate for Lieutenant Governor in 2017.” The Democratic nominee is Karen Mallard, who ran in the Democratic primary for U.S House of Representatives a year ago, losing to Elaine Luria. This is a winnable-but-tough district, where Trump won 49%-44% in 2016, and where both Justin Fairfax and Mark Herring received exactly 50% of the vote in 2017. The big questions in my mind are: 1) will Democrats turn out in large numbers in this “off/odd” election year, something they really haven’t done in the past; 2) how strong a campaign will Mallard run, after a shaky run last year for U.S. House of Representatives (note: as Chaz points out, Mallard raised twice as much money as Davis in 1Q19 and had nearly twice as much “cash on hand”)?

As for Davis, he’s been a fixture in Virginia Beach politics since 2008, when he was elected to the City Council by a 54%-46% margin, then reelected by 15 points in 2012, then easily (57%-42%) elected to the House of Delegates in 2013, reelected with no opposition in 2015, then narrowly (52%-48%) defeating Democrat Veronica Coleman in the “Blue Wave” election of November 2017. So we’ll see what happens this time, and I’m looking forward to Mallard kicking butt and Chaz moving this to “Toss-Up” in coming months. Stay tuned…and go Karen Mallard! 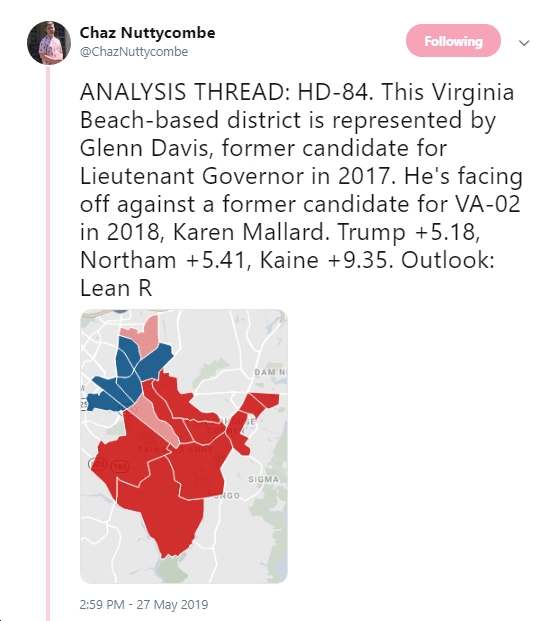 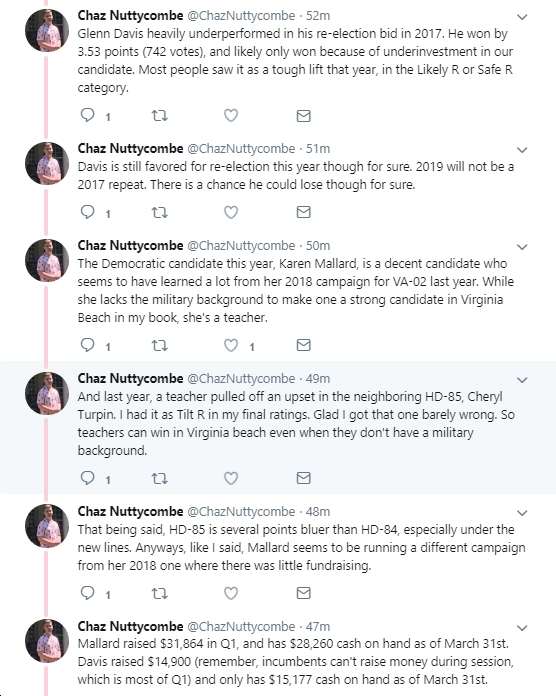