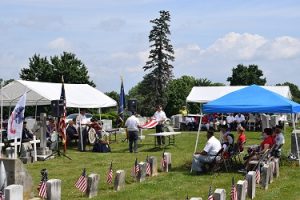 For many, it is particularly tough being a veteran on Memorial Day. Some more than others. A cult of military reverence grown from an effort to tamp down opposition to the invasion of Iraq (translate domestic PsyOp) triggers survivors’ guilt, moral injury, and resentment. These are the walking dead.

This day is dedicated to those who have sacrificed their lives in defense of our nation. Unlike Veterans Day, it is rightfully funereal. In our minds, we conjure up famous and furious battles from the Revolution onward; the deservedly heralded heroic and courageous efforts of soldiers, sailors, airpersons, and Marines. Some of us have personal losses and remembrances. Fewer than seven percent of Americans have served. And there are the families and loved ones of the fallen who continue to suffer and grieve loss.

Not all the casualties occur on the fields of war. Not all the casualties wear uniforms. All of them have sacrificed. And the toll increases daily not only in combat but at home. Something on the order of 20 veterans (the figure Martinsburg VA Medical Center Director Tim Cooke gave at a recent meeting) suffer suicide every day, succumbing to a very different fight. That means that more active and former military personnel have died during the past year as a result of suicide than during the entire War on Terror. By extrapolation, there have been more American non-combat deaths during the War on Terror than combat deaths during the entire Viet Nam War.

Collateral damage. Statistics show that women veterans die from suicide at a rate two to five times that of their male peers. By my rough math that means between three and six women veterans are lost this way every day. In March, three veterans died on the grounds of VA medical facilities, terminally disheartened; a long-standing, continuing tragedy. The political and policy pandering like claims that veteran homelessness has been ended in Virginia deliver little substance and can and have exacerbate(ed) the loss. In the spirit of Dick Cheney, though, they were volunteers, after all.

Those volunteers are disproportionately poorer than most Americans. Before the draw-down, there was effectively a “poverty draft” and the remnants continue today. How many military recruiting stations do you find in upper middle-class neighborhoods and shopping malls?

Consider the common mindless mantra, “Thank you for your service,” the broader and more meaningful perception of which has been so skillfully depicted in the documentary of the same name. On this day, many a veteran’s moral, visceral reaction to that phrase is guilt and sorrow. It may just trigger an unintended and tragic consequence.

Make this a day of reverence and introspection rather than gratuitous declaration. The greatest honor to the fallen is to ensure those who follow in their tradition of courage and valor have fallen for an honorable cause and that their burden has been equitably shared by all Americans.

Georgetown Univ. Visiting Prof. Thomas Zimmer: “The End of Roe Is Just the Beginning. A multi-level reactionary counter-mobilization is underway.”

Video, Photos: Large Crowds Attend “Bans Off Our Bodies” Rallies in Richmond, Elsewhere in Virginia (and Across the Country)