See below for two items of interest regarding the WAMU and Washington Post stories regarding “suggestions that [Fairfax County Supervisor and Board Chair candidate Jeff McKay’s] family acquired its five-bedroom home through a quid pro quo arrangement with two local developers.”

First, see the statement by one of McKay’s Democratic rivals for the nomination, Georgetown Law Professor Alicia Plerhoples, who says “where there is smoke, there is not always fire,” but that “McKay should not have engaged in this private sale, even if the developer was his friend, but more importantly, the Board should require such non-arms’ length sales to be fully and completely disclosed to the public.“

Second, see the 24-page memo by ReedSmith, prepared for Jeff McKay, in response to the original legal memo (by Nelson Mullins) that laid out a long list of allegations against McKay. According to the ReedSmith response memo, Nelson Mullins “invented some smoke but there is absolutely no fire,” as the claims laid out by them are “completely baseless.” (In the memo, it states, “There was no money or anything of value paid by Halle to Supervisor McKay. Halle sold the lots to McGhan. There was no bribe, no violation of any criminal statute involved in the purchase of Supervisor McKay’s home. All of the sales of Lot 20 were arrived at after negotiations, arm’s length transactions and represent fair market value.” Also, see the conclusion of the ReedSmith response memo, below) 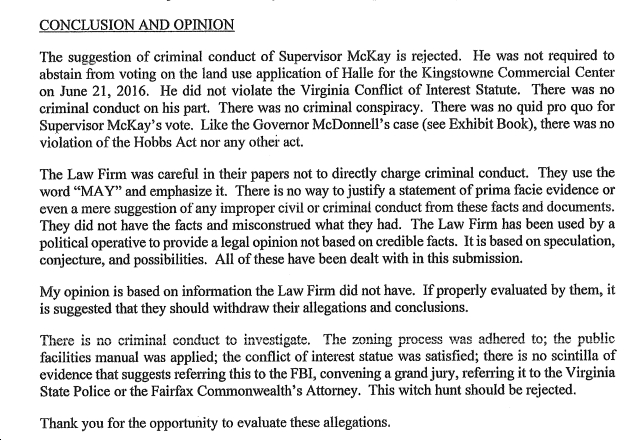 So…here we are, with 27 days to go until the June 11 primary. What do you think of all this?  I honestly don’t know whether there’s any “fire” here, but there definitely appears to be some “smoke.”

Fairfax, VA – Alicia Plerhoples, candidate for Chairman of the Fairfax County Board of Supervisors, issued a statement today regarding corruption allegations against Jeff McKay:

“When there is smoke, there is not always fire. But the corruption allegations against Jeff McKay are the very reason why I refuse to take political contributions from developers.

As of the last finance reporting cycle, Jeff McKay has taken over $89,000 from the real estate and construction industry for the June 11 primary, and the Washington Post reports that Jeff McKay has taken $50,000 from businesses affiliated with the Halle company, a Fairfax County developer, in his bid for Chairman. Taking such contributions while also overseeing zoning approvals is not illegal, but it raises the specter of impropriety and gives the public doubt about whose interests the Board of Supervisors serves as Fairfax County continues to grow.

Private sales occur all the time, but we need to hold our elected officials to the highest standards of integrity. One of the principal roles of the Board of Supervisors is approving development throughout the county. We need stronger internal Board policies to keep developers at arms’ length to avoid even the appearance of a conflict of interest.

Jeff McKay should not have engaged in this private sale, even if the developer was his friend, but more importantly, the Board should require such non-arms’ length sales to be fully and completely disclosed to the public. We owe the public trust and confidence in our elected officials.”