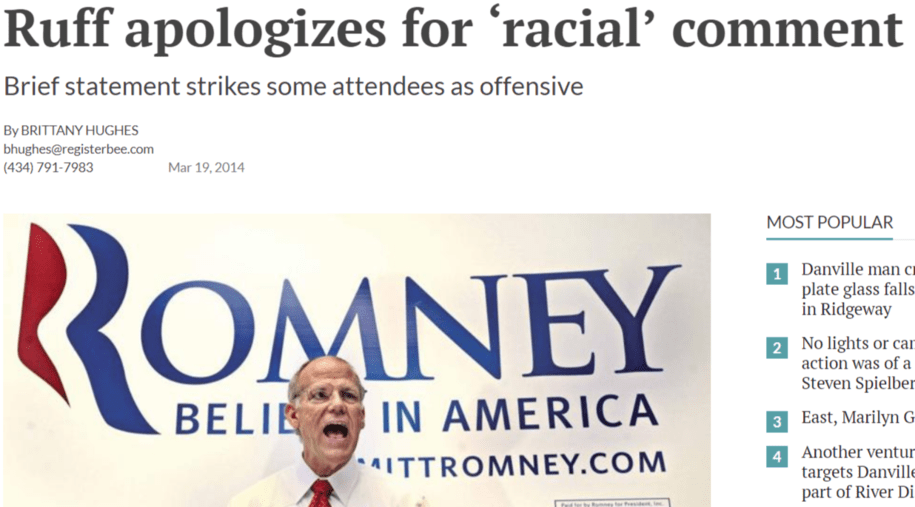 That is what he said, the link is provided below.

It was September of 2014 and I had just returned from canvassing a nice neighborhood all day with a candidate whose campaign I was managing. I got a call from a strange number. “It’s your dad; he had a heart attack and did not make it.,” Jackie said as soon as I answered. I had only spoken to my Uncle Jackie about three times in my life and never in good circumstances. After my father’s knees went south, he watched his construction business collapse and eventually lost his health insurance. He was too proud to admit to me that he could not afford to see his doctor, and he had not been taking his blood pressure medicine for some time due to its high cost. I wish that I had known and could have done more.

Medicaid expansion could have saved my father’s life. Yet, instead of acknowledging these all too common situations, my state senator made headlines by calling it a racial slur. I am proud to be running a campaign to unseat that man. My life has been shaped by many strong women including my mother and several good teachers like Virginia Smith who is the Democratic candidate for Senate District 15. Virginia has dedicated her life to serving others and lifting up those at risk, children like my two boys who needed a positive female role model in their life, following my divorce years ago.

There is a rural revolution happening in Virginia this year, but we need your help.Years of economic devastation in this district have left most folks with very little money. The good news is that a few dollars go a long way in Southside Virginia. Please consider helping us with a contribution, no matter the size. As Benjamin Franklin once said, “We must, indeed, all hang together, or most assuredly we shall all hang separately.” We can do this but we cannot do it without you.

Sen. Mark Warner: “Like many of the president’s failed business ventures, this is a giant scam.” (Joe Biden: Trump's actions will "undermine the entire financial footing of Social Security") https://bluevirginia.us/2020/08/sen-mark-warner-like-many-of-the-presidents-failed-business-ventures-this-is-a-giant-scam via @bluevirginia

Who Are the Possible Democratic Candidates for Lt. Governor in 2021? https://bluevirginia.us/2020/08/who-are-the-possible-democratic-candidates-for-lt-governor-in-2021 via @bluevirginia